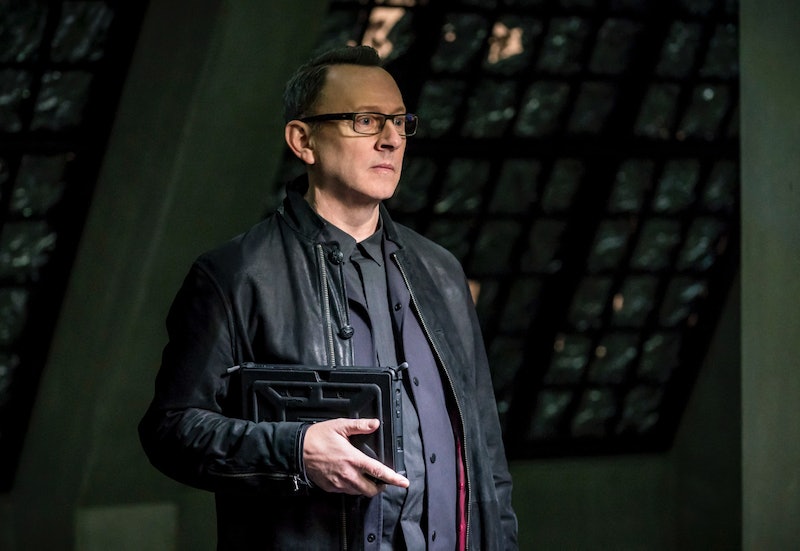 Somebody give this guy a mask. After almost two decades of playing psychologically terrifying bad guys on everything from The Practice to Lost and now currently on Arrow, Michael Emerson's face has become synonymous with downright chilling villainy. That's why his new goal is to be completely unrecognizable in his next role.

"I'm excited to think that my fans may not know who it is when they first see me," Emerson tells me about his plans for the future with an evil chuckle. Although maybe his laugh wasn't evil at all, and I'm just now predisposed to thinking everything this man does is somehow ominous after a career playing characters straight out of everyone's nightmares. You really can't unlearn everything Ben Linus did, after all. But then my confusion clears, and it can't be understated enough that Emerson's tone becomes gleefully devilish as he describes his goal to completely disappear into his next project.

"After a while they're going to go, 'Oh my god, I think that's Michael Emerson!'" he explains, with yet another ominous giggle. "I like being in deep disguise. I like being camouflaged in character. To me that is the real fun."

At this point, he drops all pretense and lets loose a deep, maniacal laugh worthy of a mustache-twirling villain in a cartoon. (I'm not exaggerating when I say that sounded exactly like, "Mwa-ha-ha!")

"I'm going to keep going in this direction. I don't know what I'll play next," he says. "I may play an alien, I may play a pirate, I may play someone who can't speak or someone who is brain-damaged or something. I honestly don't know. I want extremity."

As someone who can hand pick his roles, the possibilities are endless for Emerson, despite playing a very specific kind of character in all of his best known projects. While he doesn't have a role in mind that he wants to tackle next, he has some ideas. "I'm always anxious to play a period piece with an accent," he says. "So bring it on, Dickens or Victorian England or Russian Revolution, that kind of stuff. And the more mustaches and eye patches and wooden legs, bring it on. That's the stuff I want to play with!"

His eager excitement to take on wildly different roles, no matter what the project entails, is completely understandable. Emerson recently finished filming over 100 episodes of Person of Interest (writer: Amanda Segel) last year. After playing the same character on a CBS procedural for the better part of a decade, he's ready to shake things up. That's why he's currently playing a mysterious hacker villain on The CW's comic book drama Arrow (director: Wendey Stanzler) and about to debut a "really funny and flamboyant character" on the upcoming season of Amazon's comedic drama Mozart in the Jungle (writer: Kate Gersten).

"I'm just having so much fun," he says. "Ever since Person of Interest wrapped I have been picking roles that were more fun, more crazy, more off-the-beaten-path for me. It was just a delight for me to spread out and be large and be silly and do a funny voice and all those things you miss from doing the theater."

He thinks back to playing what he describes as "an extreme character" on Claws (director: Nicole Kassell) last season. "I like those roles where I have to grow a beard or wear a wig or dress in clothing I would never dream of wearing in real life, speak with an accent," he says. "I'm a character player at heart so lately I've been getting back to what I love."

It's fascinating to hear Emerson speak of his career goals and preferences for the silly over the dark, because it's in such stark contrast to the characters he's played. "You don't want to get into too much of a rut for too long," he says. Of course, fans will have to wait to see that side of the actor as he can currently be seen playing yet another villain, computer hacker Cayden James, on Arrow. Emerson loves how this role is allowing him to "wear really cool clothes and be uncompromised in his mind and singular mission." Emerson's cerebral villain is something entirely new for the comic-book drama, where the usual bad guy can be defeated with a well-placed punch thrown or arrow shot.

"Cayden rarely lifts a finger because he's just thought it all out," Emerson says. "He mildly despises people that have to get physical but he's not above employing them to do those kinds of things. But it is a nice change of pace [for the show] that there is no special weapons or special powers, no electromagnetics or forcefields. None of that stuff that you expect. It challenges the people with the physical powers to try to match wits with Mr. James."

He laughs again. "It's a steep order," he adds. But the more intellectual direction is one the Arrow showrunners wanted for Season 6, and that's why they approached Emerson for the role. "It's what you're going to get when you get me," he says with a laugh. "I'm not much of one for combat or a lot of big physical stuff. If that's what they needed, they would have gotten a different actor. I do alright at mental game playing and maneuvering and a little psychological terror; those kinds of things I'm very comfortable with."

And while Emerson became a household name by playing morally questionable villains, he admits that it actually wasn't on purpose in some calculated career plan. "Sometimes I think, 'I don't even know what I'm doing,'" he says with yet another laugh as I begin to sense a pattern here. "I'm just trying to scramble around and make sense of the lines, and at the end of the day when I look at it I go, 'Oh yeah, I am kind of chilling!'"

That unintentionally disturbing quality to his portrayals of otherwise ordinary men is why his time on Lost (writer: Elizabeth Sarnoff) became so iconic. He was first introduced as a random man who seemed to crash land on the island just like the heroes. His desperate need to prove innocence was so believable, until it was discovered that he wasn't who he said he was. When he dropped his mask and showed his true colors as Ben Linus, the leader of the mysterious Others, it was one of the most jaw-dropping twists in modern television history. But Emerson's not playing Ben Linus 2.0 on Arrow with Cayden James.

He thinks that Cayden is actually a lot closer to his Person of Interest character Mr. Finch, despite Finch not being a villain.

"Mr. Finch is a cousin of Cayden James on some level psychologically," he says. "Both of them are formal in their speech, both of them have manners and a kind of wry, sarcastic sense of humor. Both of them are real dangerous, except that in Cayden James' version he's just a full-on bad guy. But there are many Finch-isms in it, I would say."

At this point, Emerson could teach a master class in how to play a villain on television. His crash course for actors in a pinch, however, is pretty easy to follow. "There are certain things that I always like to do," he says of becoming a villain. "If I can, I like to be still. If I can, I like to be calm. I don't like to give a lot away. Those are just a couple of certain villain acting tools that I like to employ."

Another tool Emerson has mastered is the big twist mic drop. On Arrow, the midseason finale revealed in the very final scene that Cayden James had rounded up all of Oliver Queen's (Stephen Amell) biggest enemies and somehow convinced them all to form one big villain cabal... and Oliver has no idea.

Because Cayden has "all the bases covered" when it comes to his team of villains, "it renders Star City helpless to resist him because he can come at them so many different ways."

"So many obstacles can be knocked down because he has the control of everything that his team has control of, which is a lot," Emerson continues. "But then, they're criminals and some things could go wrong. We'll have to see."

"It's not like a pen full of panthers," he says. "We don't do a lot of snarling or anything; it's a lot of gamesmanship and chess playing going on. These alliances are very fragile and often temporary so everybody is on their best behavior. It gives the scenes a nice crackle, I must say."

He pauses, then finally admits, "I'm delighted to be part of this gang of villains because... well, I guess I'm just a sucker for villains." Cue up one more instance of evil "mwa-ha-ha" laughter and I think I've finally convinced Emerson that underneath his silly, fun-loving exterior, he's actually a villain at heart.