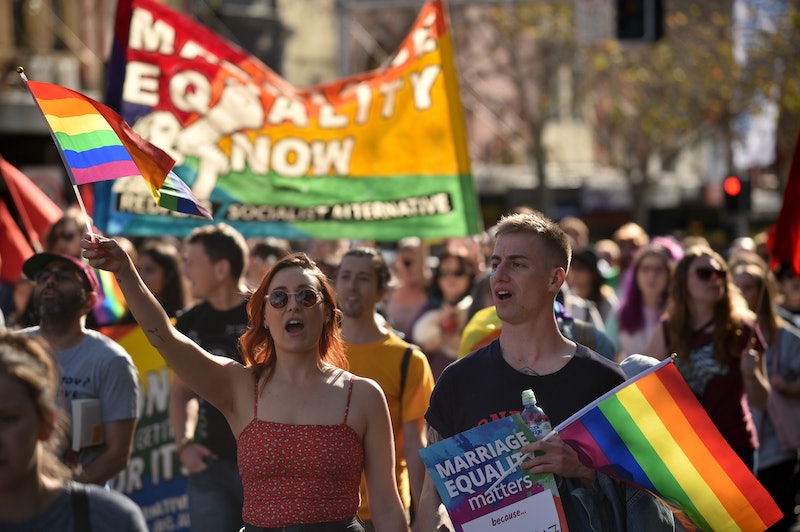 I am a queer Australian, and it shocks me as much as anybody else that, in 2017, gay marriage remains illegal in Australia. My country is one of the most progressive worldwide on gay rights and acceptance, with a 2013 Pew Research Group study finding that 79 percent of the population believe homosexuality should be accepted by society — ranking it fifth worldwide, behind Canada, Spain, Germany, and the Czech Republic. There are explicit laws on the books across most states forbidding discrimination based on sexual orientation, civil unions are widely legalized, and in 2017, a law change in South Australia meant that all 7 states and 1 territory now allow same-sex adoption. (The Northern Territory, sparely populated by a mere 210,00 people, does not, and lags behind the rest of the country on many gay rights issues.) This fall, Australians are participating in a country-wide plebiscite on whether to legalize gay marriage, and while the results aren't legally binding, it could have a huge impact on gay rights worldwide.

The vote has become the dominating story in Australian politics; since it was announced on August 8, 577,879 have updated their details on the electoral roll and over 54,500 have signed up for the first time. In a country of about 24 million people, that's a lot. The plebiscite, however, is not all it seems — and it brings up bigger questions than "Does Australia want to join the 21st century already?"

For one, the Australian plebiscite is non-binding. At a cost of $AU122 million (roughly $96 million), the government is basically conducting a mass opinion poll, and can choose to ignore the results. Unlike a referendum, like the one held in Britain in 2016 to determine whether or not it should leave the EU, or a national vote, plebiscites mean essentially nothing in legal terms. Unlike political voting in Australia, participation in the plebiscite isn't mandatory, so the results also depend highly on turnout.

But remember, regardless of what Australians end up saying they want, the government doesn't have to do anything about it, and if you're wondering why, you can blame conservative Australian politics. The struggle to actually get a plebiscite in the first place has been extensive, battling through multiple rounds with Australia's powerful political right. A non-binding postal vote was the only thing that they allowed, and as such it's being viewed as a concession to anti-gay marriage political parties. Some gay marriage advocates are arguing for a boycott because of the apparent meaninglessness of the entire procedure. Justice Michael Kirby, the Australian jurist and one of the nation's most prominent LGBT activists, has said he will boycott what he called a "Mickey Mouse" vote. A symbolic victory that wouldn't do anything, and only exists because of the continual interference of anti-LGBT politicians? Congratulations to us — if the "Yes" vote prevails at all.

The plebiscite mess also holds wider lessons for other countries in which the struggle for gay rights is ongoing (i.e., every other country on earth). The first is that LGBTQ equality is still far from a reality worldwide. Australia, one of the most pro-LGBTQ countries on earth, has been stymied into a toothless postal vote over gay marriage, and it's actually doing better than the majority of other nations. While huge progress has been made worldwide in recent years, from protection laws for LGBT people in Nepal to the decriminalization of homosexuality in Mozambique, LGBT people continue to face massive discrimination and threats.

Russia's famous "propaganda law," which prohibits any discussion of homosexuality, is only one of a vast host of worldwide legal prohibitions and punishments for LGBTQ people; the World Economic Forum points out that 75 countries worldwide continue to ban consensual homosexual sex, and discrimination on the basis of sexual identity is only explicitly prohibited in a handful of countries. And then there's the brutality that faces LGBTQ people in places like Chechnya, which is "purging" gay men from society in concentration camps.

The plebiscite in Australia indicates that, even in the most liberal countries, anti-LGBTQ advocates continue to have power. Angela Merkel, Chancellor of extremely accepting Germany, voted against gay marriage in Germany this June, though the gay marriage law itself passed. LGBTQ activists and allies cannot afford to get complacent.

The other lesson is that gay marriage is not the only right needed for LGTBQ people to attain equality. The United States may be tempted to look at Australia's mess and feel smug; with the legalization of gay marriage in the Supreme Court in 2015, the discrimination issue for the American LGBTQ community is over, right? So, so wrong. Gay marriage is divisive among LGBTQ communities, and one of the reasons is that focusing on it can draw attention away from other, more boring issues, like the right to inherit your LGBTQ partner's pension, or discrimination in employment and housing markets (or, as writer Alex Andreou found out this week, in adopting cats in London). And LGBTQ people in the United States have faced increasing worries under the Trump administration. Thus far, Trump's White House has rolled back sexual orientation anti-discrimination protections for workers, ended transgender service in the military, and repeatedly picked people with anti-LGBTQ views for top posts (Trump's recent pick for head scientist at the Department of Agriculture once equated homosexuality with pedophilia). While gay marriage looks safe in the United States for now, the rights of LGBTQ people are being minimized from many other sides. Forgetting that is a very large risk.

I remain extremely hopeful that Australians will come out in vast numbers, even for a plebiscite that has no legal powers, and declare that gay marriage is (obviously, utterly) a natural right for all of Australia's LGBTQ people. But whether it leads to legislated marriage equality or not, it needs to spur people into action, not lure them into complacency.