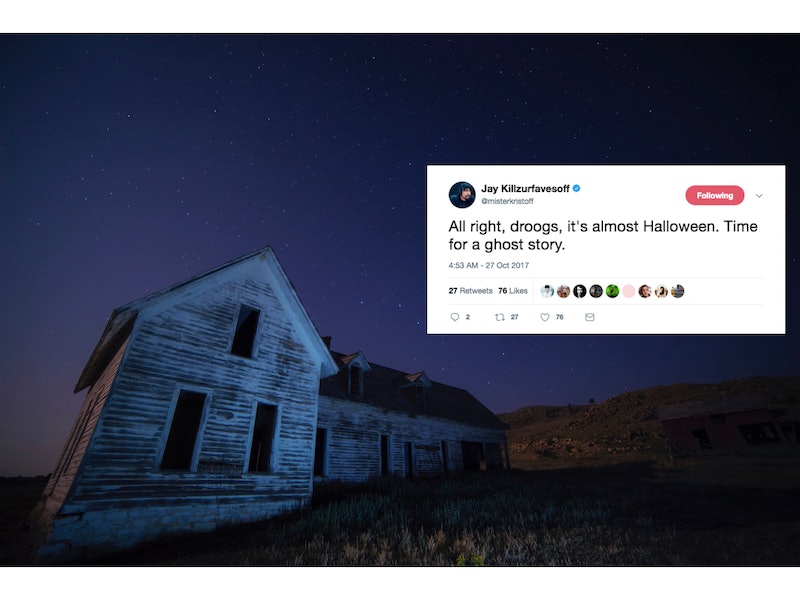 'Tis the season for spooky campfire tales, and one writer published a great one on Friday. Godsgrave author Jay Kristoff just shared a ghost story that will make you think twice about signing that new lease, and not just because it involves a surprise appearance from the Master of Horror himself, Stephen King. (OK, it's technically a Stephen King lookalike, but still.) Kristoff's haunted-house story is full of the kind of chills you crave in the days leading up to Halloween.

Spooky stories have been all the rage this year. The first film adaptation of Stephen King's It broke box-office records this summer, and illustrator Adam Ellis' ongoing tale of his encounters with "Dear David" has scared our collective pants off for months. On Friday, Stranger Things Season 2 finally appeared on Netflix after leaving us stranded for a year in the Upside Down. But we always want more, and now Kristoff has come to the rescue with his own ghost story.

According to Kristoff's tweets, his encounter with a maybe not-so-friendly ghost came during his university days, when he and his girlfriend found a cheap house to lease for six months. Their landlord bore more than a passing resemblance to Stephen King, which probably should have tipped them off that things could get very creepy inside, but, like pretty much every good horror-movie character, they ignored the warning signs.

OK, so it's possible, of course, that this is all made up (Kristoff is a fiction writer, after all), but I have no reason to doubt it's a real-life story. This spooky Twitter tale has all of the elements we have come to expect from our haunted-house stories, from the inexplicably chilly air within the house to the dog's anxiety about certain rooms. It has traits in common with The Amityville Horror, The Ring, The Hills Have Eyes, and even Dracula.

The story also fits perfectly into the new trend of Twitter horror stories. Ellis' "Dear David" is arguably the most famous of these, but Manuel Bartual's tale of an evil doppelganger has also turned heads, particularly after its author admitted that the story was a fabrication. Unlike Kristoff, however, Ellis and Bartual told their ghost stories in real time, updating their followers whenever something spooky would happen in their abodes, a distinction that led Leeds Beckett University lecturer Ruth Robbins to observe: "That sense of something happening in real time means that we don’t have the traditional reassurance that the narrator has survived the experience."

Regardless of whether or not Kristoff's tweets are the re-telling of a true experience or just a fun Halloween story, we can all be glad to know he survived to tell the tale.