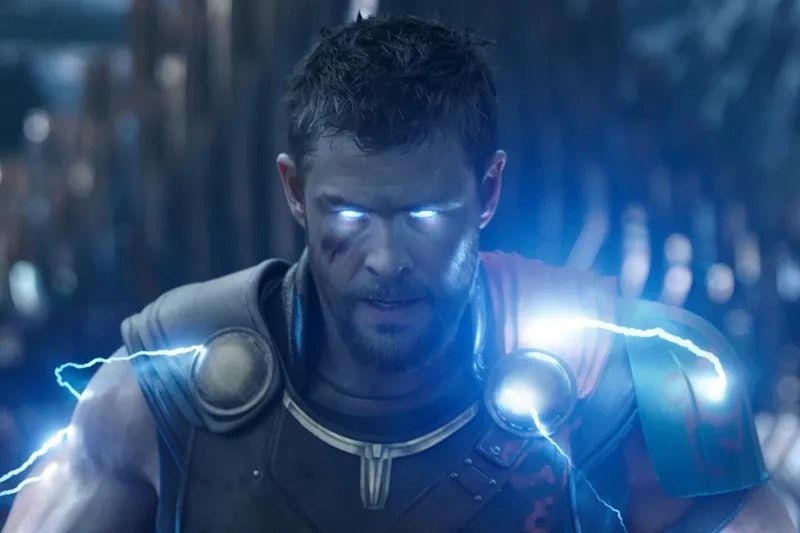 For a long time, Thor was arguably the most boring Avenger. The God of Thunder's first two solo movies were generally considered to be at the lower end of of the MCU's offerings, and it wasn't until the character got a major personality overhaul in last year's Thor: Ragnarok that he became one of the franchise's most popular characters. Now, on the strength of his Avengers: Infinity War performance, Thor is basically everyone's favorite Avenger, and Avengers 4 theories about Thor and his new axe will likely ingratiate him with fans even more moving forward.

When Thor lost his hammer Mjolnir in Ragnarok, the character was forced to look inward to find his power. That's all well and good, but the character is still considerably more powerful when he has a mystical weapon forged from Uru at his disposal. Luckily, he got one in Infinity War in the form of an axe called Stormbreaker. Stormbreaker is an even more formidable weapon than Mjolnir was, with the potential to kill Thanos while he has the Infinity Gauntlet. In other words, we're talking bonkers levels of power. Not only does Thor's new weapon possess Thanos-killing potential, but it also grants the Asgardian the ability to use the Bifrost — meaning he can travel anywhere in the universe in the blink of an eye. That's going to be a pretty useful power to have in Avengers 4.

Right off the bat, it seems as if Stormbreaker will play a role in both uniting the Avengers and locating Thanos. Remember, Iron Man is currently stuck on Titan, and it's unclear if he has a ride back to Earth (Nebula is with him, but we don't really know what her deal is or if she'd even want to help Stark). Also, Thanos is chilling with his Infinity Gauntlet on some unknown planet, and it seems possible that Stormbreaker would be able to locate him, meaning Thor could bring the surviving Avengers to pick up Iron Man on Titan and then head on over to Thanos' hiding spot for a showdown.

Speaking of that showdown between Stormbreaker and Thanos, it's almost guaranteed to happen. According to the literary concept of Chekhov's gun, since Stormbreaker was created with the sole intention of killing Thanos, then the axe will eventually have to kill Thanos in order to properly serve the story. It nearly accomplished this feat in Infinity War, plowing through a blast of energy from the Infinity Gauntlet to settle in Thanos' chest, causing Thanos himself to say that Thor should've aimed for his head. In all likelihood, that's exactly what Thor will do the next time the two meet.

Another theory stems from the origin of the axe. No, I'm not talking about its creation by Peter Dinklage's Eitri on Nidavellir. If you recall, it was Groot who formed the handle for Stormbreaker, literally breaking off a piece of himself to complete the production of the axe. Groot, like many other heroes, disappeared at the end of Infinity War after Thanos snapped his fingers, but the axe stayed put. So what does this mean? Does it mean that Groot could be recreated from a sliver of the axe's handle? Or, on an even larger scale, does it signify that the axe can somehow provide a link between the living and the dead, since its handle is made from someone who disappeared yet it resisted disappearing along with him? Perhaps the Bifrost can even travel to Soul World now because of Groot, and free all of the trapped souls within.

Infinity War devoted a lot of time to the creation of Stormbreaker, and to only have the axe end up failing to kill Thanos in the end makes Thor's entire storyline essentially pointless (though it's tough to call Thor's arrival in Wakanda, the most thrilling scene in the entire movie, pointless). The suits at Marvel are too smart to devote so much time to something that ultimately doesn't pay off, so there's little doubt that Thor and Stormbreaker will play a big role in defeating Thanos in Avengers 4.