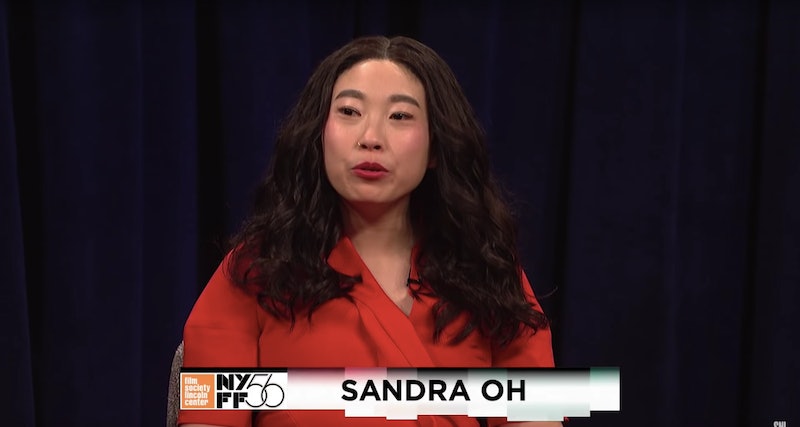 It's been a year since the Harvey Weinstein story broke, and Saturday Night Live commented on the anniversary of the #MeToo movement with a funny, but pointed sketch. On Saturday, SNL's film panel sketch got real about the #MeToo movement and representation in Hollywood. The sketch was a parody of the actor round-tables that are popular at film festivals. Cecily Strong played Marion Cotillard, Heidi Gardner took on the role of Allison Janney, and the night's host, Awkwafina appeared as Sandra Oh. The comic relief came from Kate McKinnon, reprising her Debette Goldry character, an elderly and out-of-touch actor with no real idea what's going on.

In the sketch, Aidy Bryant played a moderator and asked the actors for their thoughts on the last year and the future of Hollywood. The answers ranged from some serious and relevant thoughts, to the ridiculous, which mostly came from Debette. "It's the one year anniversary of the Harvey Weinstein story," Bryant said. "Despite the strides Hollywood has made, what still needs to change?" In response, Strong's Cotillard said that men need to stop shutting women out from the industry, and Gardner's Janney replied that bad men didn't deserve second chances. Of course, McKinnon's Goldry gave an answer that was a little less timely. She said: "They need to stop using our finger prints when they commit party murders."

While this wasn't the only funny interaction between McKinnon's Goldry and the other actors, the sketch also made more serious comments on the #MeToo moment. When asked how the movement spread to the culture at large, Awkwafina responded with a serious answer from Oh. "You see it with politics now, more women are coming forward," she said. Strong's Cotillard also commented on the current political moment. "You can see it in those hearings, there is a double standard," she said. "If a woman acted the way he did, she'd be labeled hysterical."

The sketch also addressed how #MeToo relates to issues of representation and diversity. When Bryant's character asked how the movement impacted the types of roles being offered, Awkwafina as Oh made an important point. "It's exciting that this has sort of compounded the existing conversation around representation," she said. "There's so many more roles for Asian women today, whereas before there were almost none." McKinnon's aging actor, hilariously clutching Awkwafina's hand, chimed in to argue. "What? That's not true, there were plenty of fabulous parts for Asian gals in the 1940s. And I played all of them!" Of course, Awkwafina responded to point out how offensive this was.

It was a funny exchange, but it also highlights a real issue in Hollywood. In the past, the entertainment industry has a troubling history with whitewashing roles. For example, Cameron Crowe cast Emma Stone, who is white, in Aloha as a character who is part Native Hawaiian and part Chinese. In 2017, Scarlett Johansson was cast in the Ghost in the Shell, even though the role was written for an Asian woman. These are just two examples of whitewashing, but there are many more.

The topic of representation came up throughout the evening, as SNL is actually among the institutions in Hollywood that could also do better to improve diversity. Awkwafina is only the second Asian-American woman to host the show, a statistic she addressed in her opening monologue. Lucy Liu, who hosted the show in 2000, was the first. In 2017, Tiffany Haddish was the first black woman to host the sketch show. In 2016, Melissa Villaseñor made history as the first Latina woman to join the show's cast. The fact that these historic castings and appearances only occurred in recent years shows just how much progress there is left to be made.

Even though Debette Goldry provided comic relief throughout the sketch, but the bit also made serious points about the current cultural movement. It's been a year since the watershed moment in Hollywood began, and for the sake of progress, actors should continue to have these conversations. Even if it's in the form of a funny sketch, it's still important to push the entertainment industry toward better representing its audience.