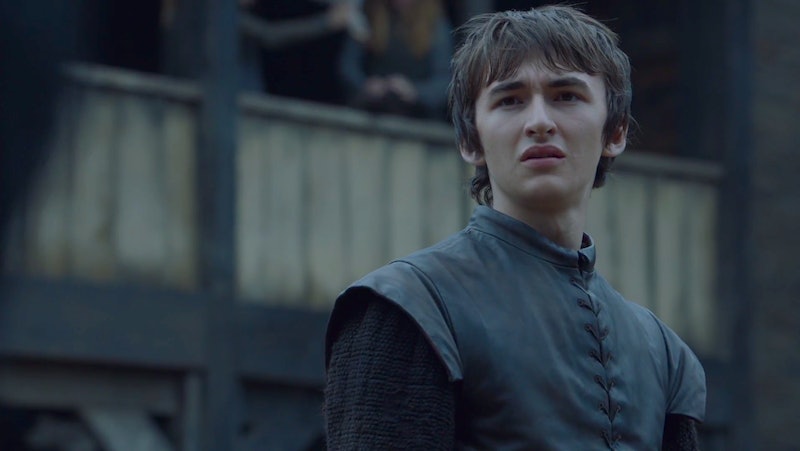 If you love crazy Game of Thrones conspiracy theories, you've probably got Reddit saved as your homepage, and this latest theory is both totally crazy and weirdly plausible. Could Bran Stark be a god? Reddit user Thefinalnights has put forth the Bran is the Lord of Light theory, which argues that Game of Thrones Season 6 Episode 5 presented the world with evidence that Bran is, in fact, the Lord of Light the priestess Melisandre has devoted her long, long life to.

Now, the idea that the Lord of Light, or R'hllor as he is known to his followers, is embodied by Bran seems far-fetched at first glance. But, given the time hopping twists of Season 6, nothing is impossible anymore. After all, Bran's powers are so strong that he inadvertently forever changed young Wylis' life when he somehow passed along Meera's urgent message of "hold the door" to the young stable boy and led Wylis to become Hodor and possibly witness his death long before it ever happened. Bran's timeline appears to be intrinsically linked to the past, and possibly even the future.

The big reveal posed some major questions about the metaphysics of the Game of Thrones universe, making it clear that Bran is able to travel through time and calling into question whether or not the Three-Eyed Raven got it wrong when he said, "The past is already written, the ink is dry." (Though, admittedly, this was something fans already suspected from the fact that Bran was able to speak directly to his father outside the Tower of Joy.) So, does all of this mean that Bran is the Lord of Light?

Maybe? The theory set forth by Thefinalnights suggests an older Bran is living in an alternate timeline where the White Walkers win the coming battle and Bran as the current Three-Eyed Raven is working to change things through his younger self. The theory even posits that Bran gifted the priests and priestesses of R'hllor with the ability to see into the flames in order to assist him in stopping the Night's King and his army. It's an interesting idea, especially given Bran's growing power, and the Night's King's desire to see Bran dead.

A quick peak at the A Song of Ice and Fire wiki offers the greatest piece of evidence to support Bran's potential godhood. The Lord of Light and the Great Other are said to be battling each other for domination. The light against the dark, fire against ice. The Great Other would be the Night's King, a symbol of darkness unleashed on the world by the Children of the Forest, who quickly lost control of their creation. If there is a human equivalent to the The Lord of Light, then it would be the Three-Eyed Raven, who is so closely tied to the Children of the Forest that it is hard not to imagine they gave him his powers as well. These are powers Bran now wields as the reigning Three-Eyed Raven.

The Night's King is obviously threatened by Bran, and even seems to be connected to him. After all, he could touch Bran when Bran was out time-hopping and leave a mark. No one else has been able to interact with Bran while he was on his vision quests unless Bran exerted some serious mental force. This does not mean there is a future Bran in another universe pulling all the strings in the current universe, but it does lend credence to the idea Bran is immensely powerful and considered to be a threat by the Night's King.

Now, the biggest problem with the theory is The Lord of Light is a god of fire, and the Starks are not readily associated with fire. The Starks have always lived in the North, and the North is not exactly a warm and cozy place. However, the Starks do have a special connection to the ancient Weirwood trees, also known as heart trees. What is the symbol of R'hllor? A fiery heart.

While the alternate timeline theory seems too sci-fi for a fantasy series like Game of Thrones, Bran as a metaphor for R'hllor makes sense in a twisted sort of way. I don't think Game of Thrones is too interested in explaining which, if any, of the gods are real or even how so many characters, from Bran and his journey through time to Dany's visions in the House of the Undying, are in touch with their supernatural side. Instead, all of the prophecies and magic of the series point toward the major unifying theory of ice and fire clashing in a battle for the ages that only "Azor Ahai" can end coming to pass.

This does not mean Bran is a god necessarily, but it does point to him playing a major role in the final battle. Whether or not he is the Lord of Light personified, Bran's ability to see past and present means he is uniquely positioned to find weaknesses and expose truths that could lead to the the Night's King's downfall. Melisandre might want to hold off on making any human sacrifices to Bran, but maybe she and the rest of the characters would not be wrong in valuing Bran as a representation of hope for the future.