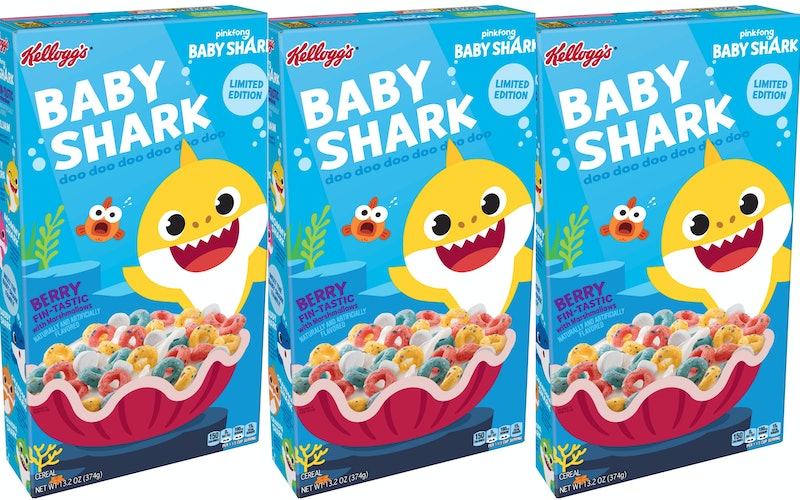 Y'all, Shark Week is just around the corner, which means we will be spending a week respecting the majestic beast of the deep blue just as our Lord and Savior Left Shark intended. That said, if you're going to double down for a solid week of watching the Discovery channel and ignoring your friends and loved ones for in the name of a big ole scary fish, you better have snacks at the ready. Enter Kellogg's new Baby Shark Cereal, which is about to hit exclusively at Sam's Club, then later at Walmart, for a limited time, and become what I imagine is either every parents' dream come true or worst nightmare.

I say nightmare because, as any breathing person with an internet connection knows, there is no way to not hear the song "Baby Shark"; I, a childless adult woman who maybe makes eye contact with a baby once per month, know the words so well that it seems that I never learned them, but that they, in fact, learned me; that the words have been in my bones since the dawn of time. Now, thanks to Kellogg's, they can also be in my stomach.

Aside from the fact that you will have the song stuck in your head for 24 to 72 hours after you consume a bowl of this new cereal, it does look quite delicious — per a press release, the flavor is "Berry Fin-tastic," and the blue, red, and yellow cereal rounds come mixed with marshmallows. Er, I'm sorry — "shark-shaped marbits." It's sort of like Froot Loops and Lucky Charms had a baby that sprouted gills, and also will never stop singing until we have stopped time itself.

"We know Baby Shark is a catchy tune that has captured the hearts of many families," said Erin Storm, Kellogg marketing director All Family Cereal, in a press release. "New Kellogg's Baby Shark cereal was created to expand on the joy families feel in a tasty way."

If you're feeling the hype for Shark Week or are just a shark stan in general, there's yet another adorable way you can celebrate this summer — Build-A-Bear collaborated with Discovery to create a Shark Week Collection, which includes plush sharks and Shark Week-themed outfits and accessories. If you can't make it to a store to create your own (baby!) shark, you can order a Tiger Shark or a Whale Shark online, and accessorize them how you see fit. (And then Instagram them next to a big ole bowl of Baby Shark Cereal, because this summer belongs to the sharks now, I don't make the rules.)

Just make sure if you're going to doo doo doo doo doo doo your way over to Sam's Club to grab yourself a box of these, just make sure to act fast — per the press release, they should be available in August, but unlike the song that will be in your end until the moment you breathe your last breath, this cereal is only around while supplies last.

Correction: A previous version of this article misstated the availability of Baby Shark cereal. It has been updated to remove incorrect information.