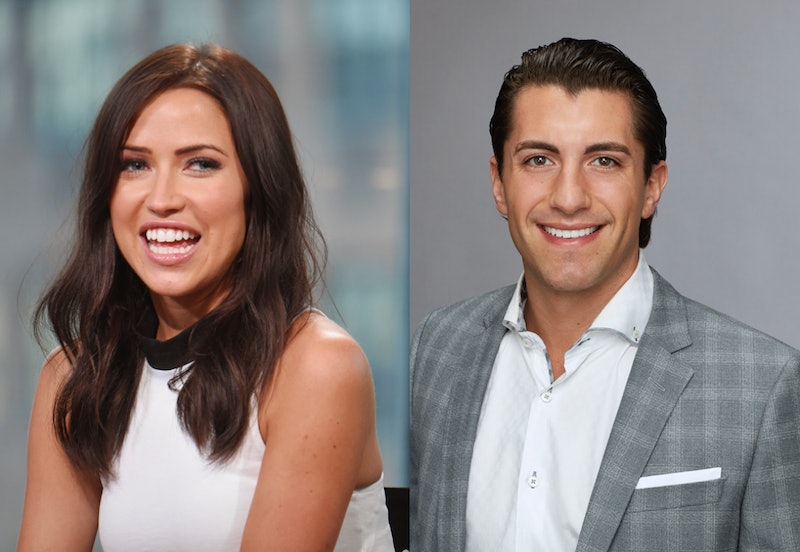 Among the group of Bachelor Nation reporters on hand for Colton Underwood's three-hour Bachelor season premiere were Jason Tartick of Becca's Bachelorette season and former Bachelorette Kaitlyn Bristowe. And it turns out, these alums have more than their appearance on reality television in common since past Bachelorette contestant Jason asked Kaitlyn on a date.

As Entertainment Tonight reported, Blake Horstmann and Jason called into Kaitlyn's podcast Off The Vine on Tuesday. And after some online flirting between them leading up to Colton's season, the Bachelorette took matters into her own hands to request a date from Jason. So it seems that Jason fans now have a pretty solid reason to celebrate that he didn't become the Bachelor this season.

While Jason was a favorite for many to become the Bachelor for Season 23, Colton nabbed the title. But don't be too upset for the banker from Buffalo, New York. Not only has he been supportive of his buddy's Bachelor role, but Jason has made his own love connection thanks to the show. On her Jan. 8 podcast, Kaitlyn noted that she'd be seeing Jason and Blake in Colorado this upcoming weekend and directly asked, "Jason, are you finally going to ask me on a date?" He replied with a laugh, "You're making me blush over here, Kaitlyn." But then quickly added, "If we're going to be in the same city at the same time, I see no reason why we shouldn't go to dinner and grab drinks, what do you think?" Kaitlyn responded, "OK, I'm in."

Kaitlyn, who first appeared on Chris Soules' Bachelor season, just recently announced her breakup from Shawn Booth, who proposed to her during her season of The Bachelorette back in 2015. But there's been an unexpected silver lining in Jason and Kaitlyn's recent flirting on social media. As reported by Life & Style, Jason even created a poll in his Instagram Story at the end of December asking people if he should date Kaitlyn, and the majority said yes. But it wasn't until 2019 that Kaitlyn decided to put those words into action.

During an appearance on the podcast Chicks in the Office in late December, Kaitlyn discussed her romantic potential with Jason. "I think we're so similar with our senses of humor. He reminds me of a Canadian boy," the Bachelorette from Canada said. "He can hang and he can banter. So I think our banter comes across as flirting." But she seemed to be intrigued by the fact that he seemed genuinely interested in her flirting with him. "Maybe he went on the show and his destiny was to meet his crush, me," she joked about Becca's second runner-up.

Jason has been nothing but open about his interest since their date became official. In an interview with Extra on Tuesday, Jason revealed their date plans, and later, when he and Blake were asked what they are looking for in a woman, Jason replied, "So, should I describe Kaitlyn Bristowe?" In a separate interview with ET, Jason gushed about his attraction to Kaitlyn. "She is a down-to-earth, beautiful woman who has a great sense of humor. She seems very strong and knows what she wants and empowers women," Jason said. He also added another reason they could work: "We both love wine!"

Kaitlyn joked on Off the Vine that maybe they'll give an update on how their date goes on her podcast. But for now, it's just great to see Kaitlyn finding happiness and being willing to date after her breakup. And it certainly doesn't hurt that she chose to go out with one of Bachelor Nation's most beloved contestants. As the always-candid Kaitlyn told Jason after he asked her out, "I'm all in ... Don't f*ck it up" — and fans couldn't agree with her more.