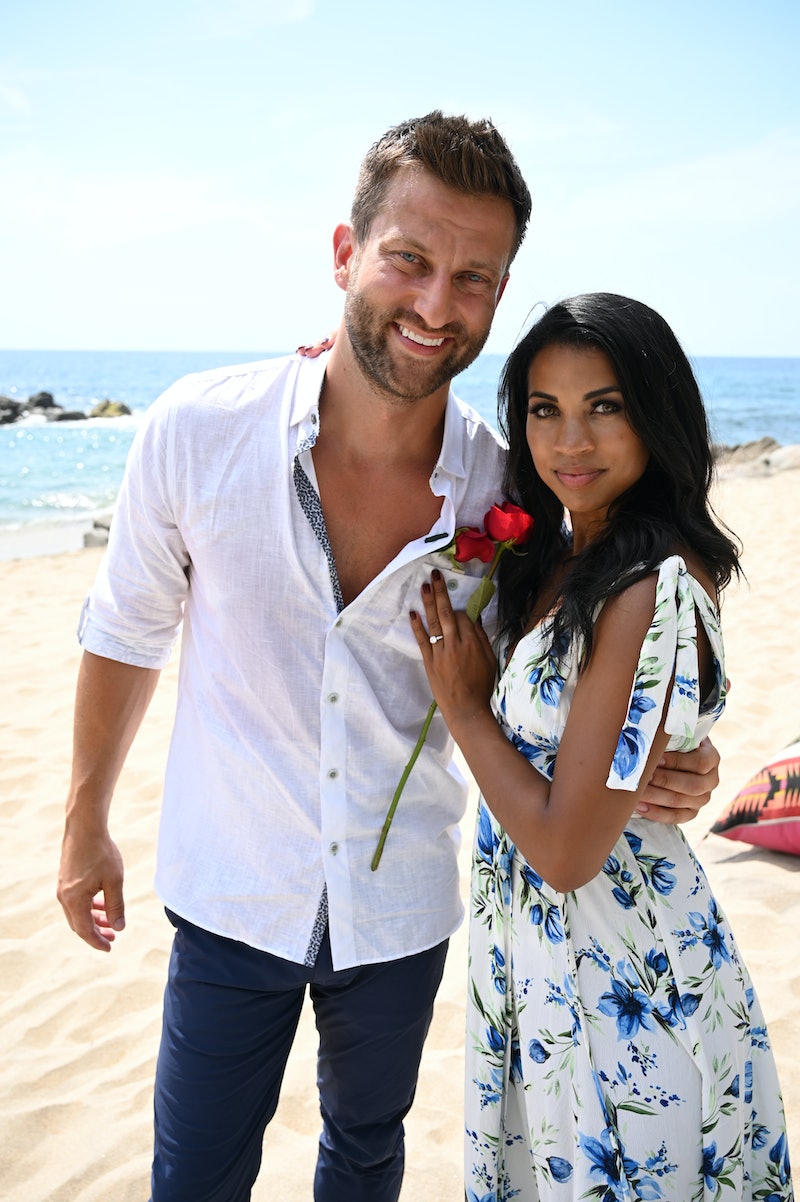 Looks like another Bachelor Nation couple has left paradise behind. On Tuesday, December 10, Bachelor in Paradise stars Chris Bukowski and Katie Morton announced they have split in a pair of nearly identical posts on Instagram, explaining that they fought hard for their relationship, but ultimately decided to "love and respect each other as friends." Chris shared a photo from shortly after he proposed during his and Katie's time on Bachelor in Paradise, alongside his announcement, while she opted for a more intimate photo of the couple relaxing after leaving the show.

The pair referenced their often rocky relationship in their joint statement, writing that "one of the many lessons this life has taught us is that it’s okay to be stubborn in the pursuit of happiness. To fight for what is real and good, and that often times the hardest thing and the right thing are the same." However, the statement continued, "We’ve reached a point in our story where we agree it’s best to go our separate ways."

Despite their decision to end their engagement, Chris and Katie's statement made it clear that they still have a great deal of affection for one another. "We have chosen to love and respect each other as friends because that’s the base of our relationship, and it’s what is most natural for us," the pair explained, adding that they were "thankful for the support" that they have received from their loved ones and Bachelor Nation during and after their time on the reality show.

The former couple received and outpouring of support from their fellow members of Bachelor Nation in response to their announcement, with their fellow Bachelor in Paradise cast members like Mike Johnson, Dylan Barbour and Derek Peth sending well wishes in the wake of their breakup. "You both are so strong!" Tayshia Adams commented under Katie's post. "This isn’t easy! Love you both!"

Kristian Haggerty, who recently ended her own BiP engagement to Demi Burnett, shared a message of support for Katie, writing in part, "You’re a beautiful human with such a kind heart. I’m so proud of you for sharing your love with the world." Even Chris himself sent a message of love to his former fiancée in the comments of his own post, telling Katie that he will "cherish this pictured moment for rest of my life."

Despite their strong connection on Bachelor in Paradise, Chris and Katie have been very open about their struggles to make their relationship work both on and off the beach. During the reunion show in September, a tearful Katie took the stage without her engagement ring and confessed that she felt she wasn't getting enough love from Chris in the weeks since the proposal. The couple continued to argue after leaving the stage, as Chris admitted that he felt blindsided by her sharing their troubles on national TV.

After the episode aired, Chris wrote on Instagram that her candid comments on the finale had made him realize that he needed to make more of an effort with his fiancée. "Love is tough. Love is beautiful. Most importantly love is patient," he wrote, along with a photo of himself feeding Katie a slice of pizza. "Sometimes you need a shock to the system to put a fire under your ass. What I felt then I feel even more now. I love you @katieemo and can’t wait to feed you pizza for the rest of our lives."

In November, the pair told Us Weekly that they were attempting to enjoy their relationship out of the spotlight, now that their time in paradise was over. "We’ve just took a break from [the spotlight] after Paradise cause it was very intense and we don’t feel the need to prove anything to anyone, which has been nice," Katie said at the time. Sadly, it looks like despite their time away from the scrutiny of Bachelor Nation, the pair weren't able to make things work.

More like this
Hannah Ann Got Engaged 3 Years After 'The Bachelor' & The Proposal Was Dreamy
By Grace Wehniainen
Zach Reveals The Chaotic 30 Minutes That Were Cut From ‘The Bachelor’ Premiere
By Grace Wehniainen
RHOP’s Robyn Dixon Explained Why Juan Paid For Another Woman's Hotel Room
By Brad Witter
'Love Island' Has Added Yet Another Bombshell To The Villa
By Bustle UK
Get Even More From Bustle — Sign Up For The Newsletter
From hair trends to relationship advice, our daily newsletter has everything you need to sound like a person who’s on TikTok, even if you aren’t.