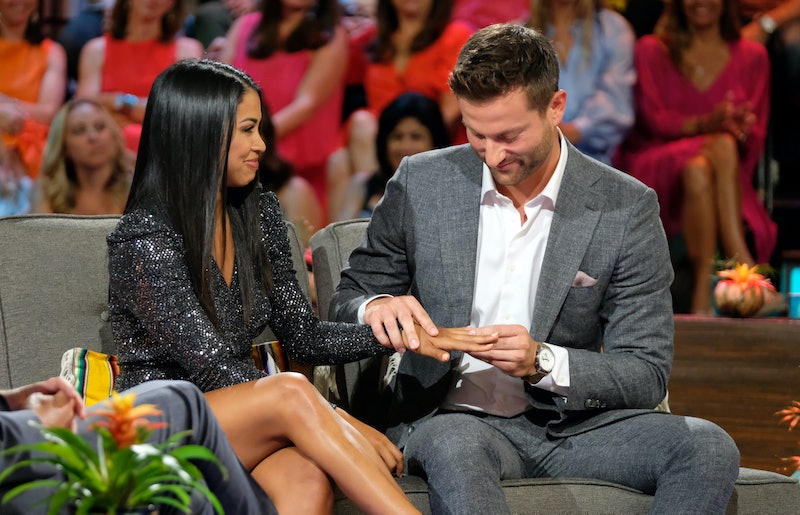 The Bachelor in Paradise finale gave updates on couples like Hannah and Dylan, Demi and Kristian, and even Tayshia and John Paul Jones. But viewers were left wondering where Katie and Chris landed after their couple's counseling session with Chris Harrison. But thank goodness for social media since Chris and Katie's post-Paradise messages show that they are still together and have done some significant work on their relationship. Because while the Bachelor franchise might be all about showing off the romance, this couple is keeping it real and discussing the work it takes to keep a relationship afloat.

Chris and Katie were far from a sure thing ahead of the Bachelor in Paradise finale. Yet, after their overnight date in the Fantasy Suite, the hesitant Bachelor elder was inspired to propose to Katie. But during the reunion show, Katie tearfully took the stage without her engagement ring to share how she wasn't getting enough from Chris. Her fiancé eventually joined her in the hot seat and she accepted her ring back, but that wasn't the end of things. Chris and Katie continued to argue outside of the studio since Chris felt Katie blindsided him by talking about their relationship issues so openly in front of an audience. That was the last fans saw of them on Season 6 of Bachelor in Paradise, but it didn't mark the end of them.

While the clues already existed on social media about their current status, Chris jumped on Twitter and Instagram almost immediately after the Paradise finale to give a relationship update. He shared a photo of him feeding Katie pizza in bed at the Knickerbocker Hotel in New York City. While the image was amusing, the sentiment behind his caption was sincere. "Love is tough. Love is beautiful. Most importantly love is patient. Sometimes you need a shock to the system to put a fire under your ass. What I felt then I feel even more now. I love you @katieemo and can’t wait to feed you pizza for the rest of our lives."

Everyone who watched the Bachelor in Paradise reunion knows exactly what that "shock to the system" that Chris mentioned was. Katie made it clear to host Harrison that their relationship had been struggling since the beach due to Chris not putting in as much of an effort as she was and it left her feeling exhausted. While Chris might have been upset at the time, knowing full well that these relationship issues they had previously discussed would be on national TV, he seems to appreciate Katie taking the measures she did since now they are in a much better place.

As for Katie, she also shared a relationship status update on Instagram and addressed any concerns people may have had after watching her on the finale. "Communication is the link to everything, which is something we sure did LACK in paradise and shortly after. It took us a few months to really get our bearings (especially with some exceptional and unexpected challenges). I know none of you will truly understand why things are the way they are but I ask that you trust me and support me as I navigate this new world of mine. Because I'm happy with me and we are finally happy with us," Katie wrote.

The Paradise reunion was filmed three weeks before it aired, back on Aug. 27. That doesn't seem like a hugely significant amount of time to work through the problems they discussed on the aftershow. But considering Katie and Chris got engaged after only a few weeks of filming, this particular relationship might not need a lot of time for things to evolve — something else Katie noted in her Instagram post. "We have grown so much in our friendship and now in our relationship since that day," Katie wrote. "I can't promise you this relationship will be perfect (it won't be/ it isn't) and I can't promise we will last forever. ... But what I can promise you is that I take this seriously, won't lose myself, I will always try my best, I will always keep it real, and we will have each other's backs."

Even though they didn't end Paradise as solid as one might have hoped, their messages after the show prove that Katie and Chris think their love is worth fighting for.