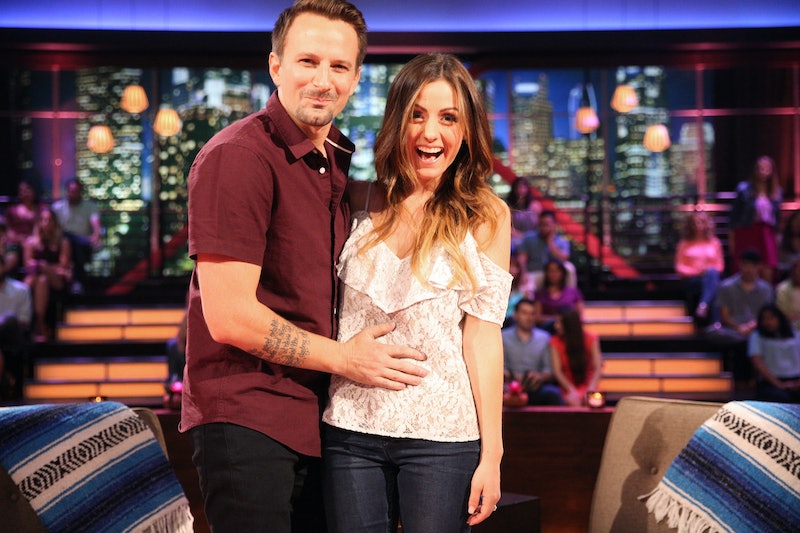 Bachelor Nation rejoice, there is another baby in your midst. Bachelor In Paradise's Carly Waddell had baby no. 2 with Evan Bass, according to Us Weekly. And this proud papa is happy to share some exciting news about his new baby boy. “Baby Charlie is healthy and delivery was fast and perfect straight into mommy’s arms,” Bass told Us Weekly. “Everyone is doing well.”

Charles "Charlie" Wolfe was born on Nov. 12 at 11:22 a.m., weighing in at 6 pounds, 13 ounces. Shortly after Charlie's arrival he made his Instagram debut with a photo on Waddell's Instagram Stories. While fans couldn't see his face, they got a good look at his tiny striped beanie.

Later, Bass and Waddell would share the first pic of Charlie with People. In it, he's meeting his big sister Isabella "Bella" Evelyn Bass, who was born in February of last year. Charlie also has three older brothers — Ensley, Liam and Nathan — from Bass' previous marriage.

The couple, who wed in June 2017, announced they were having their second baby back in May with a sweet Instagram photo of them all showing off their bellies. "Beer Belly, Bella Belly, BABY BELLY!!!" Waddell wrote. "We [are] so SO EXCITED to FINALLY announce Bella’s little brother or sister will be here in November!!! (If you wonder why I haven’t been on social media as much…well, this is why!)”

As fans could see from the photos, Bella was also excited to become a big sister. "Bella is going to freak out,” Bass told Us Weekly back in June about baby no. 2. “[She] carries her babies around and hugs them and kisses them and just, like, brushes their hair.” Waddell added, "Bella loves babies. … She’s more maternal than I am, I think.”

Bass would have to disagree with his wife there. After they had their first child, Bass talked about how it changed his wife, "Before Bella, Carly would never have called herself nurturing, but afterwards, she is the most loving, caring and selfless mom," he told E! News in June 2018. "She is untiring in her maternal love and it's so, so cool to watch a side of her come out that I'd never seen before."

While Bella's baby shower was filled with Bachelor alums, Charlie's gender reveal was equally as Bachelor friendly. Bass and Waddell, who met on Bachelor In Paradise Season 3, shared baby no. 2 would be a son during the September BiP finale by having Wells Adams jump out of a giant cake wearing a blue onesie.

While Adams may not get the honor of being Charlie's godfather, at least he got to be his very first hype man.