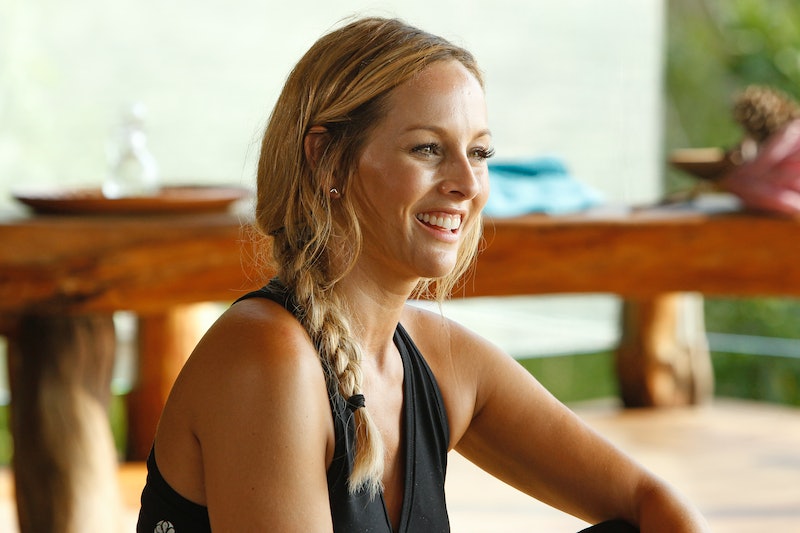 Production on her season of The Bachelorette is temporarily shutdown due to the novel coronavirus, but that didn't stop Clare Crawley from calling out Juan Pablo Galavais' Bachelorette criticism over the weekend. During his 2014 season of The Bachelor, Clare stopped Juan Pablo mid-breakup with a speech that's still considered iconic in Bachelor Nation. This weekend, the 38-year-old tweeted about the ages of the men competing for Clare's heart in her season, and it didn't take long for the new Bachelorette to clap back.

On Saturday, Mar. 14, Juan Pablo tweeted, "I just SAW the GUYS for @Clare_Crawley Bachelorette season and its gonna be INTERESTING seeing HER get hit on by KIDS on their 20s... I think this MIGHT be the 3rd SEASON Im gonna watch." At 38, Clare is the show's oldest Bachelorette to date, which means she could challenge the age bias that exists within the franchise. As for the Bachelorette contestants announced for her season so far, they range in ages from 23-42, a good mix for the star who previously said she has no issue dating younger men.

Clearly, the former Bachelor isn't so enlightened. But Clare was having none of Juan Pablo's problematic nonsense about women dating younger men (after all, his wife, Osmariel Villalobos is 31 — seven years younger than him). "And yet here you are, older than 99% of them and still cant practice compassion and kindness...," she responded. The former Bachelor then tried to convince Clare that she had somehow misread his offensive tweet. "Hey, ALL I want is for you to FIND love, you taking it the WRONG way Clare..." he tweeted back.

Anyone who watched Season 18 of The Bachelor is likely unsurprised by Juan Pablo's behavior. During his final date with Clare, she asked him to tell her that he loved her. He responded with: "I barely know you but I loved f*cking you." It remains one of the show's worst moments, but Clare didn't let his gross behavior go unchecked. At the rose ceremony, she told him, "I lost respect for you because I'll tell you what. I thought I knew what kinda man you were? What you just made me go through? I would never want my children having a father like you." It seems she still has no problem putting Juan Pablo in his place.

As Clare told People earlier this month, she's focused on finding someone she can be in a loving relationship with, and age is unlikely to factor into her decision-making process. "I feel like my age is really an asset," she told the outlet. "I've gone through twists and turns and I know what I will and won't put up with. Twenty-three-year-old Clare had no clue what I wanted. And I'm glad that wasn't the end of my love story because I'm such a different woman now."

She may be a different woman now, but one thing remains the same: Clare still has no time for Juan Pablo's sexist comments.