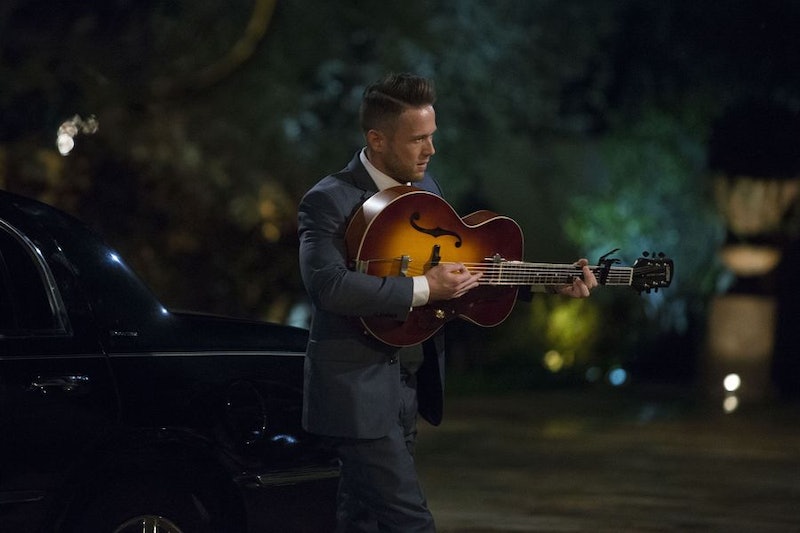 Prepare to roll your eyes and internally cringe. There's a detail about a certain Bachelorette contestant that may prove he's not good enough for Rachel Lindsay after all. I'll just cut to the chase: Lee Garrett may identify as a meninist — at the very least, he seemed very into the idea in a tweet last November. And even if he's joking, I have one question: Why? Seriously, please explain.

Last fall, Lee tweeted a (now broken) Facebook link, writing, "'Meninist'?... I have found my calling." Maybe this shouldn't be all that surprising from someone who refers to himself as "Pleasantly Offensive" in his Twitter bio (don't worry, he also claims to be "Facetious"). So it's unclear if he's kidding or not. But if he's not? Oy. Vey. (Bustle reached out to ABC about Lee's tweets, but they declined to comment.)

In case you're not familiar with the phrase, "meninist" is a satirical movement that's supposed to be the male equivalent of feminism (even though, as you probably know, feminism is all about equality for both sexes.) I'll let Urban Dictionary explain the full definition: "A (satirical) belief showing the hypocrisy of first world feminism by flipping the sexes and complaining about men's rights in a similar way to what first world feminists do."

Quite frankly, it's not funny. It wasn't funny back when the meninism trend started, as early as 2014, according to BuzzFeed. And it's especially not in 2017. It's offensive. Considering the U.S. president once bragged about grabbing women "by the p*ssy" and has been accused of sexual assault on multiple occasions (Donald Trump denied the assault allegations repeatedly), this is not the time to take women's fight for justice lightly. Need I mention the American Health Care Act and how it could impact women's access to healthcare? Or the fact that Republicans are trying harder than ever to defund Planned Parenthood, which provides vital care to millions of female and male patients across the country? Women and their bodies remain a commodity in political conversations, instead of something they have autonomy over.

For Lee to be hopping on the meninist bandwagon, or even just joking about doing so, proves he's not on Rachel's intellectual level. He can't be. She's a strong-willed career woman who goes after what she wants in life. She's educated, compassionate, and passionate — and I've gathered that just from watching her on a TV show. I bet in person she's even more badass. Plus, she tweeted in January that she believes in equal rights for women.

That tweet is all the proof you need that Rachel deserves better; she deserves a romantic partner who doesn't engage in backwards internet jargon. Meninism doesn't take women or their voices seriously, and that in and of itself is problematic. As Refinery29's Sesali Bowen puts it, Lee may be this season's villain and I can't help but agree. In addition, Bowen pointed out that Lee once tweeted the phrase white privilege in quotation marks, as if not taking the subject seriously.

After I took a deep dive on Lee's Twitter, this is, in fact, true. He's even said he wouldn't ever date a girl who used the dating apps Tinder and Bumble, and declared he couldn't fill women's need for self-worth. Lee also once tweeted a petition that compares the Black Lives Matter movement to a terrorist group, while deeming welfare "the root of all racism." I know these points are part of a whole other issue, but once again, I'm uncomfortable.

Tying everything together, Lee posted these actually wise words:

I can't deny that it's a fitting sentiment, considering how some of his old posts may reflect his character. I highly doubt he thought Bachelor Nation would see these tweets.

Long story short, Rachel is a history-making Bachelorette. She's the first woman of color to lead the show and she's helping the series take steps forward, simply by being herself. And in many ways, Lee feels like a leap backwards with his seemingly close-minded viewpoints that don't value women and mock real issues. Rachel (and every woman) deserves so much more.