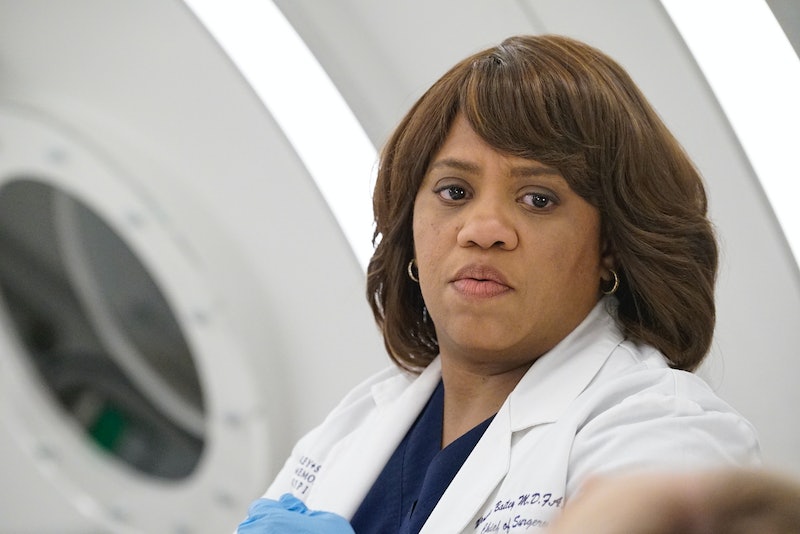 Looks like Amelia isn't the only surgeon expecting a baby at Grey Sloan. Bailey's pregnancy news on Grey's Anatomy's Oct. 17 episode, "It's Raining Men," naturally signals some big changes ahead across the board. What's stayed the exactly same thus far, however, is that it's Maggie who's once again tasked with being the only one who knows a fellow doc's pregnancy secret. She lamented this after revealing her boss is both in perimenopause (the transition to menopause) and pregnant, pleading to Bailey, "Please tell me you're not going to keep it a secret."

Only four episodes into Grey's Season 16, Bailey's wasn't even the first pregnancy reveal so far. Earlier this year, Amelia found out she's pregnant with Link's baby, and, though viewers don't yet know how close each woman's due date is to the other's, they're likely near the same stages in their pregnancies. Suffice it to say that giving Bailey and Amelia an excuse to bond over their juxtaposed experiences could make for some comedic relief on ABC's often-heavy medical drama.

It seems that comedy may lie ahead for Bailey in general. Assuming she was experiencing symptoms related to her Season 15 heart attack, Bailey secretly consulted with Maggie, who ultimately shared the news that menopause was more likely. That gave Bailey the opportunity to (prematurely) share the news with husband Ben (making a Station 19 crossover) in an exasperated "I am woman, hear me roar" speech, complete with both drama and comedy. When one fan on Twitter asked if she was supposed to be laughing at Bailey's scene, Grey's showrunner Krista Vernoff replied, "The answer to this question is pretty much always yes!"

While the preview of next week's Grey's episode revealed Bailey will at least attempt to tell Ben she's expecting his child, Amelia could actually be a great confidant for her until the secret is out. Since discovering she's pregnant herself, Amelia has struggled with the anxiety related to her past miscarriage. Bailey is sure to simultaneously be wrestling with her own fears, given her recent heart issues (and ensuing stress-related sabbatical) as well, which could lead to some heartwarming scenes of the duo leaning on each other.

For now, Amelia is getting plenty of support from Link — quite literally. Elsewhere in the episode, she described her and Link's "gravity blanket" stress-reduction simulation to Maggie, and fans got to see it in action later, as Amelia laid on top of her baby's father. Perhaps most notable in the scene, however, was the moment "big, calm mountain" Link confessed he's falling in love with Amelia, all while cradling her pregnant belly. The couple appears to be on solid footing after deciding to raise their baby together.

One Grey's couple that did appear to be on shakier ground by the episode's end, however, was Meredith and her boyfriend, DeLuca. After Meredith's apparently mistitled Hospital Hell at Grey Sloan Memorial article wreaked havoc on her former employer, she defected from community service to attempt to do damage control with Bailey. (Even Meredith's text from Cristina warned her to move to Switzerland, rather than risk Bailey murdering her in her sleep.) After telling DeLuca she had to appear in court for leaving her work crew, a tense exchange followed between the couple over Meredith's defiance. What Meredith made clear was that she had no room for his judgment over her current life decisions.

In non-couple-related "breakup" news, Owen also informed Karasic that he's leaving Grey Sloan to work at struggling rival Pac North with Karev and Webber. Teddy is fully back to performing surgery after the birth of their child, but, even so, the news of Owen's new job didn't seem to faze her. Count them as another steady couple at this point — until the childcare logistics need to be figured out, maybe.

While Bailey's pregnancy "curveball" will undoubtedly bring major changes to the futures of several of the show's characters, Grey's fans know well to expect the unexpected. As for what that means for Bailey specifically, stay tuned.