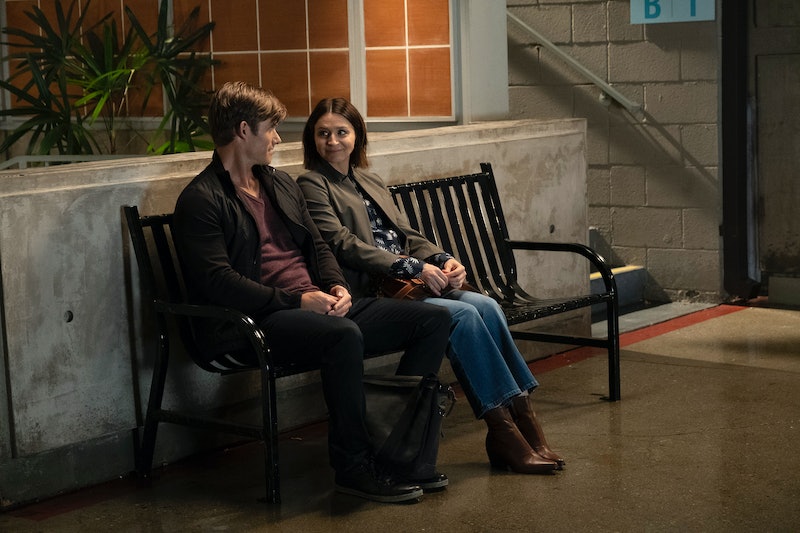 Spoilers ahead for Grey's Anatomy Season 16. There has never been a dull moment in Amelia Shepard's life, and things aren't slowing down in her life anytime soon. Now, Amelia is pregnant with Link’s baby on Grey’s Anatomy which means that their no-strings-attached fling is moving to the next level. All it took was an honest, vulnerable conversation about their personal histories and fears about what having a kid would do their lives.

Amelia and Link have a lot to navigate now — she had to tell him everything about her past (dead fiancé, dead child) and he admitted that he was afraid their baby would get bone cancer because he, as a child, had bone cancer. According to Grey’s Anatomy showrunner Krista Vernoff, it was important for Grey’s to show this real-life “will we have this baby” conversation because it’s the kind of conversation that couples have all the time. Instead of sensationalizing the pregnancy in the name of a good, soapy plot, Amelia and Link's conversation, and ultimate decision, feels authentic and real. Deciding to have a child can be both terrifying and exciting and that balance comes through in the writing here.

Caterina Scorsone, who plays Amelia, agrees. "Amelia and Link have made up their minds to have this kid and I think it’s really brave. Even though they don’t have all the answers with regard to their relationship status and future they’ve decided to co-parent this kid,'” she tells Bustle.

Have we ever seen Amelia be so... chill? With Link, she seems calmer and more natural, which, according to Vernoff, is the first time we’ve seen Amelia like this. “There is an ease and a lightness that occurs between them that I’ve never seen in Amelia’s relationships prior to this,” she said. “With rare exception, Link and Amelia tend to be kind and gentle with each other. Like, they kind of feel each other’s pain and seek to protect the other from their own baser impulses. It’s a really lovely dynamic.”

Scorsone is into it, too. "Link and Amelia’s relationship is very new and definitely still in the exploratory phase. The biggest difference between this relationship and her relationship with Owen is that this one is so far pretty drama free. Link is pretty easy going and Amelia is kind of fascinated by the possibility of choosing something easy for the first time," she says.

Of course, this so-called “lovely dynamic” doesn’t mean that everything will go swimmingly for the couple. Vernoff admitted that it was “complicated,” especially because of the fact that Owen and Amelia are still technically co-parenting Leo together. She explains, "Betty left Leo to both of their care, and even though Amelia signed Leo’s custody legally over to Owen, she is very much in that baby’s life."

Link doesn’t seem like a jealous man (which is lucky, because Owen Hunt just refuses to go away), but there could definitely be some major issues on the horizon. Remember: Amelia didn't want to have kids with Owen. “Amelia being pregnant will be a complicated thing emotionally for Owen because her expressed desire to never have children was a major factor in their marriage ending,” Vernoff added.

Still, Owen is moving on with Teddy and their daughter, and he has to let go of Amelia in order to do that. Watching Amelia be as honest and open with Link, the one guy she didn’t think she didn't want an emotional connection with, is refreshing for fans who have been waiting for something Good™ to happen to Amelia. This seems like it might be her moment.

"Amelia has been through so much at this point that I’m starting to think she actually is a Superhero and her super power is emotional resilience," Scorsone agrees. "I don’t know what will happen with Amelia and this baby yet, but I know, whatever they decide to do, she’s the lady to handle it and to find the hard won wisdom in her experience, whatever it may be."

However their relationship goes, Amelia has already grown leaps and bounds from her beginning days on Private Practice and Grey’s Anatomy, and this baby could be her taking her next (and biggest) step.