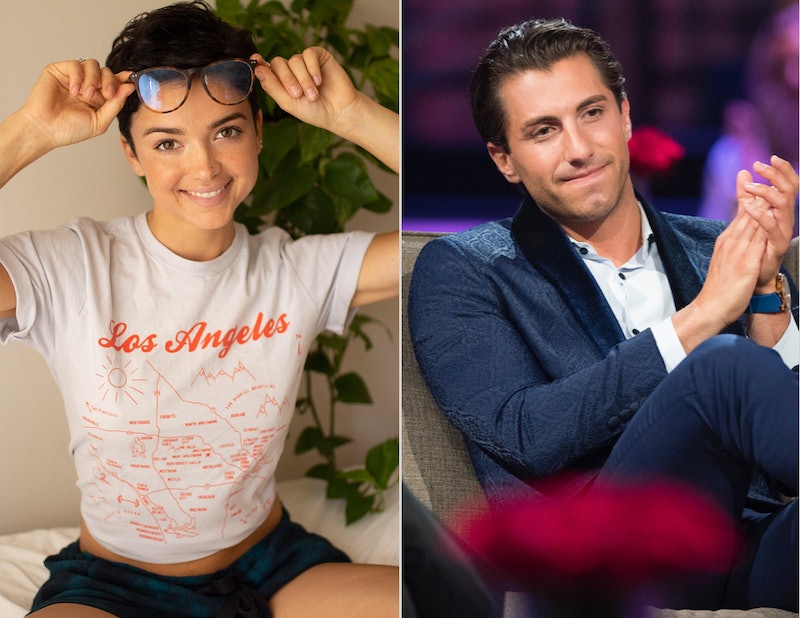 After competing on Arie Luyendyk Jr.'s Bachelor season, Bekah Martinez has plenty of opinions about the franchise, and she's dishing all to Bustle. Read what Bekah has to say about the Fantasy Suite dates and Bachelor Nation breakups in this week's recap.

It’s fantasy suite week, and of course, there was plenty of drama!

I have to say I especially loved the Thailand location because Becca’s stylist didn’t put her in any sparkly black or metallic gunmetal outfits for the whole week. It was a nice break.

First up was Blake’s date. I love him, we all love him, he’s great. They’re great together. The first portion of the date was around the Buddhist temple, and the no physical affection rule was actually a bit refreshing. I like seeing the couples just chat and enjoy their time together without all the tongue action, although Lord knows I’d be doing the exact same thing.

Blake has become even more attractive with each passing week. At first, I didn’t think he was that cute, but that all changed after seeing his vulnerability, how genuine and openhearted he is, and his genuine adoration of Becca. Plus, seeing him shirtless in the morning with his arms around her wasn’t disappointing.

Blake and Becca’s date did take a melancholy turn. As Blake expressed his fears of being deeply hurt, Becca seemed so sad knowing that those fears could become his reality. It must be so difficult knowing that for every moment their relationship grows stronger, the possibility for greater heartbreak increases. Same goes for every other relationship, but Blake’s vocalization of the situation made it all too real. Becca tried her best to console him, explaining how she felt when she was in the same position with Arie, but it didn’t seem too reassuring considering how that situation played out.

It was also kind of funny how Becca pointed out that Blake seemed “in his head” the morning after. Like yeah, obviously he’s in his head — he probably can’t stop thinking about how two other guys are probably going to sleep with his girl over the next few days. Not to mention him uttering the saddest thing I’ve ever heard post-fantasy suite: “What if this is the last time I wake up next to her?” Sobbing.

I’m going to skip ahead to Garrett for a minute. This is the first week where his personality really seemed to show through, although I’m still confused as to what’s going on inside his head and heart most of the time. I think I’ve said it before, but I just don’t understand Garrett. He’s difficult to read, and I feel like I’m missing something that Becca’s seeing. What I *can* see is Becca’s affection for him. There is a tenderness in her voice when she speaks about him, and a quiet softness in their interactions. It is peaceful, and there’s no doubt he would remain a steady presence in Becca's life if their relationship continues. I like his inability to be swayed by exterior circumstances. Garrett has remained constant and simple in his love for Becca, which may be just what she needs.

Looping back around to this week’s casualty of love: Jason. Jason and Becca’s relationship has always felt a bit surface level to me. There’s a distance that only seems to be bridged through physical attraction, and while chemistry’s great, it can’t fuel the fire forever.

Again, I felt so bad for Becca when she broke down a bit during the day because I recognized that feeling — the feeling of knowing it’s over and the anxiety of knowing you’ll have to be the one to end it. It’s awful to break up with someone you care about. I think it’s fully possible to love someone yet know they’re not the one for you, and it’s one of the worst feelings in the world. Hurting someone close to you is never easy, even when you know it’s better to do it sooner than to wait. That (first) breakup was rough, but more so for Becca than for Jason.

It’s hard. Most of us women are so damn empathetic. We’re always worried about hurting people, and experience painful guilt when we break someone’s heart because we know what it feels like to be heartbroken. In this case though, it looked like Becca took it much harder than Jason. Maybe it wasn’t so much about Jason, but because she knew this was a small taste of the week to come when she’d have to part with one of the men she was truly in love with.

Sure, it’s only eight weeks, but if you’ve ever been in a whirlwind romance before, you know that being dumped after a two-month relationship can still be hugely devastating. That being said, Bachelor and Bachelorette relationships are removed from “real life.” When a contestant goes home, they are returned to a world with no tangible ties to their ex-partner besides a brief hometown visit. Maybe it’s just me, but I think one of the hardest parts of a breakup is having to be reminded of your ex all the time in everyday life. There are usually so many memories tied to your daily routine and daily surroundings. In a way, the fact that Bachelor and Bachelorette romances are completely removed from your world at home can make it a bit easier to handle the loss.

As for Jason’s return, I have the unpopular opinion that it was unimpressive. Becca made it clear the first time around that it was truly over, and she didn’t need to give him any justification for wanting to end it. The second breakup seemed like it was just for his benefit, and although some will cite the scrapbook in his defense, it came across as a thinly-veiled effort to project himself as future Bachelor material. Also, (I know I’m being SO hard on the poor guy) did anyone else notice the blinking and face-scrunching to try to force a tear out?

Yes, Jason was kind and courteous. But the truth is, handling a breakup by not acting like a total psycho should be the basic minimum. Jason does seem very sweet and like he means well, but I think we should hold everyone to the same standard when it comes to getting dumped. Dumpees around the world should realize it probably isn’t their fault, it’s probably just because their partner doesn’t feel the way they used to. I had an ex put it best when I broke up with him: “Well, you can’t help who you love and who you stop loving.”