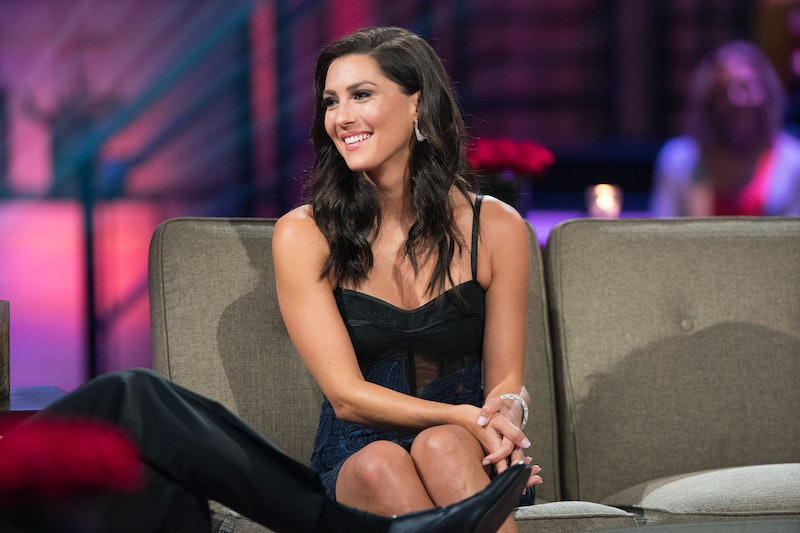 Becca Kufrin's season of The Bachelorette may be over, but that doesn't mean she's done with the franchise. On Monday night's episode, Becca appeared on Bachelor in Paradise, and her surprise visit definitely shook things up. Of course, the women were so happy to see her, because who wouldn't be happy to unexpectedly see one of their Bachelor BFFs at the beach? But when it came to her ex, Colton, things weren't going so hot.

It all started when Chris Harrison announced that he had a surprise for the girls only, and the groups split off. Becca arrived and was pumped to be reunited with her pals, but the second that Colton found out that she was there, he lost it — we're talking full on sobbing. At first, he was just a little freaked out at the thought of seeing his ex again, but then, he realized just how not over their relationship he was at that point, and that brought him to tears.

"I came here to find my person," he told the cameras. "I came here to take a chance, take a risk. I thought I was ready. Obviously I'm not, and I'm just now realizing it."

Yeah, we'd say so — as if his conversation with Tia earlier in the episode didn't already make that crystal clear.

During Becca's visit, she pulled Tia aside so they could talk in private about the Colton situation, and she gets a lot of credit for this, because it doesn't seem like anything that has happened has come between them or changed their friendship at all, which is so refreshing. Becca actually seemed genuinely eager to find out how things were going. Tia summed it up pretty concisely when she told Becca, "I said, 'What the hell are you doing in Paradise if you don't feel ready to decide what you want?'" when talking about her big discussion with Colton.

And of course, Twitter had plenty to say about the situation — and surprisingly enough, none of it is actually about Colton; most of it is about Becca. Being surprised by your ex is never a good thing, especially if, you know, she's with somebody else, so it's not shocking that Colton had a hard time handling it... but that's not where people's thoughts were. If anything, Bachelor Nation was ready to move onto something new and, well, interesting.

Mostly, people just didn't care to see Becca so soon after her finale, especially the ones who disagreed that with her decision to choose Garrett over Blake. To many of them, that makes it impossible for her to be here handing out relationship advice.

People Were Just Generally Over All Of It

Hopefully, Tuesday night brings a little more closure for Colton and Becca... at least so he can move on. Obviously, that's something he really needs if he's ever going to fall in love with anyone else, in Paradise or elsewhere.