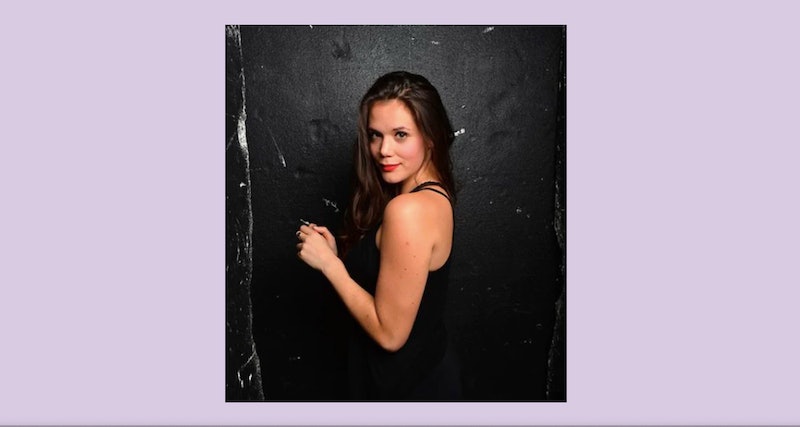 I've had sex with men — a lot of men. In fact, a major facet of my identity for most of my adult life was that I was open and irreverent about really liking sex and having a lot of it, largely with men. You could even argue that I built a career on it. But, in the last four years, that's changed. I'm in the happiest, healthiest, and (undoubtedly) most grownup relationship of my life — and my partner is a woman. And, though I've always been vocal about my bisexuality, for the first time I've really started to experience bi erasure as a result of misinformation about what it really means to be bi. Over the last four years, an overwhelming number of people have started assuming that I'm a lesbian because I'm dating a woman — but I'm just as bi as I've always been.

My experience isn't new. A lot of bi or pan — two terms that simply mean attraction to people of different genders — people have their queerness pushed to one side or denied completely when they get into a relationship that people view as "straight." Bisexual people overwhelmingly tend to be in straight-presenting relationships, with the 2013 Pew Research LGBT Survey finding that 84% of self-identified bisexual people were in relationships with someone of a different sex — and in fact, only 9% were in same-sex relationships.

This means that, unless you find a way of shoehorning in your queerness, people often make the assumption that bi people in these kinds of relationships are hetero. Or, worse, they assume that you might have been bi once, but you've magically "switched sides" — fallen back into straight privilege overnight with your previous sexuality and queerness being completely erased in the process. Being bi was just a phase, anyway, right?

At certain points in my life, I've experienced this kind of erasure as a result of being public about my relationships with men — and it can be incredibly frustrating and unsettling, especially for someone whose sexuality is very important to them. Now, however, I have the opposite issue — everybody thinks I'm gay. The longer I'm in my relationship, the more people I encounter who only have known me since I've been in a serious relationship with a woman — and gradually, I've gone from a young adult known for my checkered sexual history to a woman in my early 30s in a settled relationship with a long-term female partner.

On the face of it, there's obviously nothing wrong with being read as gay. I have no problem with lesbians — I've been very much in love with one for the past four years. My issue with being seen as a lesbian is simply that... well, I'm not one. My sexuality has always been a large part of who I am, and I don't want to have it pushed to one side or reduced to something that it's not — or have my history rewritten in the process. But if you had told me that people would assume I was a lesbian, I would have probably shrugged it off and wondered why it would even be an issue. The reality has been far more infuriating and, at some points, frankly bizarre.

At first, I just picked up on the odd comment. People talk about "what it's like with a guy" on a date or in bed, like they are speaking another language that must be impossible for me to translate. And in every instance, I have to decide whether to stop the entire conversation to correct the narrative or to let it pass — and let that bit of my history be ebbed away with every ignorant comment.

Then, there are the more hurtful assumptions, the ones coming from friends and ex-partners — and comments that drift away from ignorance and straight into biphobia and homophobia. A man I had sex with regularly for over two years asked if I was "gay now." Another I dated for four months said, "I always knew you were a dyke." Fragile masculinity at its worst, to be sure — without a doubt, toxic and hateful. But also... just weird.

And this matters, because those little assumptions, the ignorant comments — and even the well-meaning ones — do real damage.

I've settled on a very simple explanation: "I still love dick in theory." It's a quip, it's true — but it's also kind of a cop out. I don't always feel like getting on my high horse about having people respect my identity, because climbing up there is exhausting and some days I just don't have the energy. I don't always feel like it's my job to explain how sexuality works, and correct reductive assumptions every time somebody makes a misstep or an ignorant comment. I sometimes hope a quick line will do it for me.

But when I do have the energy, here's what I explain: I'm not a lesbian because I'm in a relationship with a woman. I'm no less bi now than when I was smack in the middle of a threesome — or when I was in a long-term relationship with a dude. Your sexuality isn't contingent on your current partner — or the person whom you are swapping bodily fluids with at this very moment. Being bi or pan doesn't mean having partners spread equally over the gender spectrum, and it doesn't mean your attraction has to be spread equally, either. And no matter how you identify, you don't have to justify or prove it to anyone.

And this matters, because those little assumptions, the ignorant comments — and even the well-meaning ones — do real damage. The more of those biphobic comments that are accepted and not challenged, the more we invalidate and erase bisexuality and pansexuality — and the more we invalidate and erase the idea of a sexuality spectrum as a whole. If we allow these words to be erased from peoples' vocabularies and from the popular understanding of sexuality, that means there will be more confused young people who don't know there are words out there to describe what they are feeling — and a community ready to accept them for who they are.

The consequences are real. Bisexual people have higher rates of depression and other mental health issues than other queer folk, according to study after study. "Bisexual and pansexual people are frequently subjected to discrimination and a lack of social acceptance — even within the lesbian and gay communities," research officer Julia Taylor, who led the research from La Trobe's Australian Research Centre in Sex, Health and Society, which conducted one such study, said in a press release. "People are assumed to be heterosexual or homosexual depending on the gender of their partner and there is a lack of widely visible bisexual role models and few organized communities."

So I try, most of the time, to do more than roll my eyes or quip. I remember that while I may just find the mistakes and erasure infuriating, for others the cost is much greater. Because visibility matters — and we need more of it.

More like this
TikTok's Voluntary Celibacy Trend Has Sparked A Movement
By Lexi Inks
The 3 Zodiac Signs Most Likely To Get Married Later In Life
By Kristine Fellizar
4 Zodiac Signs That Will Take Forever To Admit They Like You
By Kristine Fellizar
18 Hinge Prompt Answers To Try If You’re Looking For Something Casual
By Lexi Inks
Get Even More From Bustle — Sign Up For The Newsletter
From hair trends to relationship advice, our daily newsletter has everything you need to sound like a person who’s on TikTok, even if you aren’t.