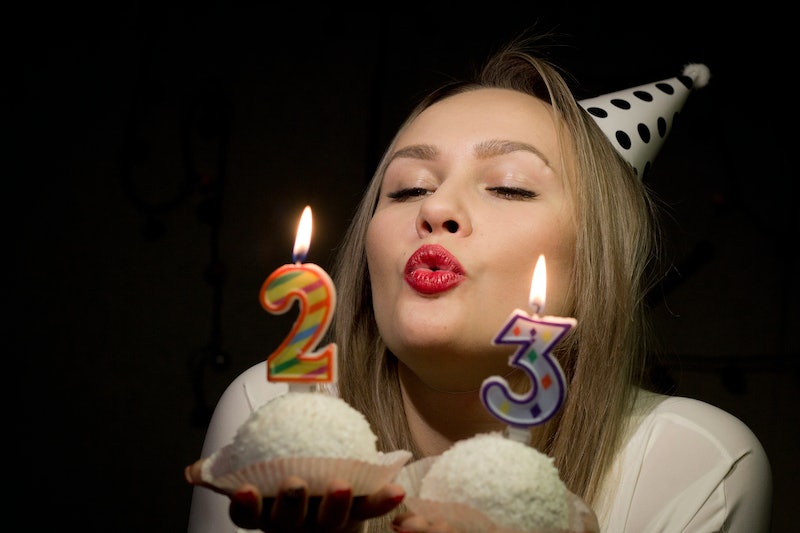 First things first: To find out if you were born during Mercury's backspin, look at your birth chart (you can create a natal chart for free on Cafe Astrology), and locate Mercury. If Mercury was retrograde when you were born, you'll see "Rx" above the Mercury symbol in your chart.

So, what does it mean? "Often [people born during Mercury retrograde] are in their own mental worlds and have difficulty communicating clearly with others. For instance, they have a conversation in their head which the other person doesn’t know about, of course. They believe they said aloud what they were thinking, but they actually did not verbalize it," astrologer Janet Booth said on her website, Astrology Booth. "Or they mishear what someone says because they project their own thoughts onto the person’s words or they didn’t listen well since they were focused on their inner dialogue."

This isn't necessarily a bad thing, because people who are introspective also tend to be wildly creative. According to Booth on her website, the late musical genius Prince was a Mercury-retro baby. She added that while people born during Mercury retrograde tend to be shy as children, they become more outgoing in their early 20s. And this is when most artists unleash their creative energy onto the world.

According to astrologer Nic Gaudette on The Dark Pixie Astrology, people with Mercury retrograde in their natal charts can be insecure about how they're perceived by others. Because their minds work differently, non-Mercury-retro people often have trouble understanding where Mercury-retro-born folks are coming from.

"You can have a wicked sense of humor because you interpret what you see in the world differently and point out the things that are so ridiculously absurd. You can find unconventional ways of taking in information that might seem weird at first glance, but can have a hint of pure brilliance in them," Gaudette explained on The Dark Pixie Astrology. "There’s a tremendous amount of mental energy and power that can be unlocked with Mercury retrograde in the natal chart. It just usually takes a while to let go of the fear, isolation, or insecurity that accompanies this position."

On her website, Pauline Gerosa astrology, astrologer Pauline Gerosa noted that other influential people born during Mercury retrograde include Steve Jobs, Hillary Clinton, Madonna, and Lady Gaga. So yes, if you can get out of your own way and develop confidence in your abilities, being born during Mercury retrograde comes with the ability to alter the course of history. "[People born during Mercury retrograde] are excellent at digesting facts and reintroducing them in a more imaginative form. You process information retrospectively and you prefer to review and revise any data you’ve been given. There could be a strong element of right brain (creative, artistic, intuitive) influence on your thought patterns," Gerosa noted on her website. You know, the kind of element that allows you to dream up the iPhone.

This is all a long way of saying that if you were born during Mercury retrograde, you have special powers that the rest of us don't. Just remember that with great power comes great responsibility. Use your superpowers wisely.

More like this
These 4 Zodiac Signs Make The Best Bridesmaids
By Nina Kahn
Andie From 'How To Lose A Guy In 10 Days' Is A Total Gemini
By Nina Kahn
The Zodiac Sign Pairs Most Likely To Have A Sibling Rivalry
By Kristine Fellizar
Here's Your Horoscope For February 2023
By Alexandria Lettman
Get Even More From Bustle — Sign Up For The Newsletter
From hair trends to relationship advice, our daily newsletter has everything you need to sound like a person who’s on TikTok, even if you aren’t.