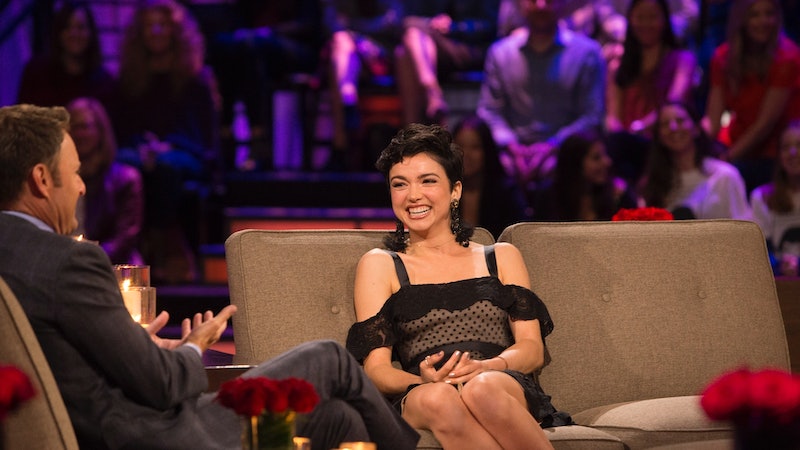 It feels like Arie Luyendyk Jr.'s season of The Bachelor was a whole lifetime ago, but who can ever forget all the attention that then-22-year-old contestant Bekah Martinez received? No, she didn't actually do or say anything controversial, but she got a lot of heat merely for being 22. So when watching the new season, Bekah wondered why no one talked about contestants' ages, since she'd faced so much scrutiny on the subject herself. Her tweet may have been a joke, but it still raises an interesting point.

During Monday night's premiere, Bekah shared some photos of herself during Arie's season. It wasn't just a photo montage though. Along with the pictures, Bekah wrote on Twitter,

"when half the girls are under 25 and no one questions if they’re ready for marriage....."

According to the Bachelor cast bios, 13 of the 30 contestants are under the age of 25. The youngest contestant is Heather, who was 22 during filming, just like Bekah. So far, no one has made a big deal about Heather's age. However, they have hyped up the fact that Heather has never been kissed (just like how this Bachelor season has had so much focus on Colton's virginity). It's possible Heather's age may become a secondary storyline, but not yet.

Regardless, Bekah's age was such a big deal last season. At first, it wasn't even listed in her cast bio or on the show when she did on-camera interviews. There was so much build-up. Once she finally revealed her age, she was constantly criticized and told what she was and wasn't ready for in her own life.

During an interview with Vulture last March, Bekah discussed the way her age was addressed on Arie's season of The Bachelor. She explained,

"Yeah, of course there are parts of me that are immature. Isn't that true with most people? There's always learning and growing to do. I know what I want, and I think my personality is mistaken for immaturity or not being ready for marriage. No, maybe it just means I have a different idea than what marriage means."

And in a February interview with People that same year, Bekah admitted, "I’ve never gotten so much judgment in my life about how old I am." She also reflected on her elimination from Arie's season and explained why she felt like her age was merely an excuse to send her home. Bekah told People, "When I left, the oldest person there was still nine years younger than Arie." Then, she theorized,

“I think he was afraid of his feelings for me. I think he was looking for an out the whole time, and my age was the perfect thing. Had I been 27 or 28, he would have interpreted my energy and my attitude as part of my personality — whereas since he knew I was 22, he interpreted it as signs of immaturity. So it was frustrating."

And now it seems like Bekah is understandably more frustrated, and maybe even a little surprised, by the lack of age conversation during this season of The Bachelor.

While there's no doubt it must be bothersome for Bekah to feel like she was the only one criticized for her age to such a great extent, it might actually be a good thing for the franchise if contestants' ages aren't as much of a focus this time around. In other words, hopefully no contestants this season face that same level of scrutiny that she went through.