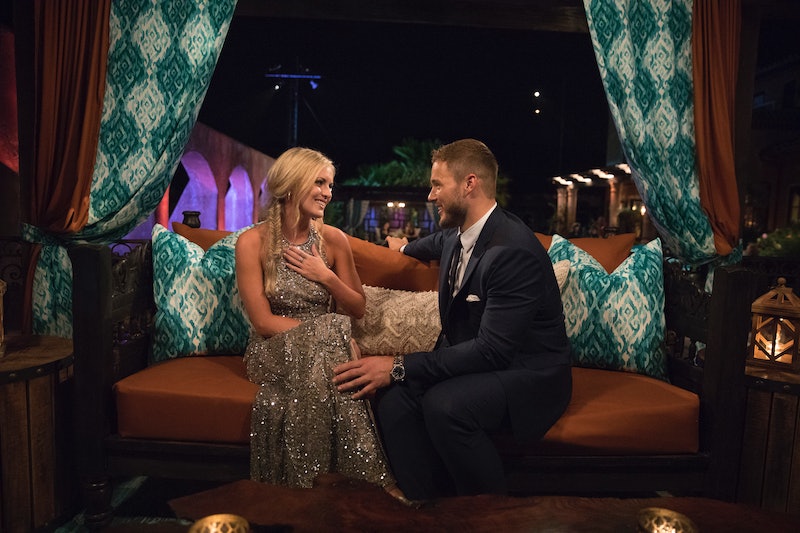 Colton Underwood is a virgin. But if you’re a Bachelor fan, you already know that. If you’re not a Bachelor fan, you also probably already know that. Colton Underwood, the franchise’s newest leading man, has never had sex with another person. It’s not a big deal, as far as admissions go, but don't tell ABC or Bachelor producers that — they’re banking on people watching this season solely to see this man lose his virginity in the Fantasy Suite, which is something, even for this series. Colton's Bachelor tagline mentions it, and you can expect to hear about it over and over again throughout the season. It's already happening, as the numerous references to Colton’s virginity on The Bachelor premiere, illustrates. It's going to be a long, long season.

On some level, it's hard not to feel bad for the guy. But this is what he signed up for, and he seems pretty game to at least be open about his sex life. Over and over again. Colton told TVGuide about his season of The Bachelor, "There were ups and downs and at times it got really challenging… but it allowed me to grow, and I think this is going to be an unbelievable season.” Unbelievable in the sense that no one believed a virgin would be the Bachelor, or that producers are going to use it as a gimmick?

In all seriousness, I’m not sure that people truly care so much about Colton’s sex life or that it entices them to watch or not to watch. But, much like Chris Soules being a farmer or Becca and the fact that she was dumped on national television, being a virgin is Colton’s identifier for his season. Going in, Bachelor Nation knew it would be A Thing™, but no one could have prepared for the amount of jokes and mentions it got just in the first couple minutes of the premiere. The mentions began right away, and they didn’t slow down until the end. Let’s take a look.

In an intro to the live premiere, Harrison teased that viewers would be in for the "most shocking season yet," and that Colton might "lose something along the way." Twice actually, and all within the first five minutes. Then, Jason said something about it.

She should know better, shouldn't she? She was the franchise's resident virgin until last year.

Hannah B. Says Sex "Is A Big Deal"

In her intro video, Hannah B, mentioned that she wasn’t a virgin, and the subtext here is that Colton is. Hannah B. has had sex before, but it’s a big deal to her, like it is to Colton.

Heather Has Never Been Kissed

The second contestant up would love to be kissed by a virgin like Colton, because they both don’t have any experience. Groan.

Get your mind out of the gutter. A dental hygienist, Kirpa jokes that flossing Colton’s teeth is “the closest” that one could get to him, at this point.

Demi Wants To Try Out The Cupcakes

Firecracker Demi says that sex is important, because how do you know what you like if you’ve never tried something new? (She’s right, for what it’s worth.)

In his intro, he says that he's the first virgin Bachelor. Yes, we know. We’ve heard.

He Also Mentions His Past Romances (But Not Tia)

Colton says he was ready to lose his virginity to Becca.

Chris & Colton Talk About His Virginity

The men discussed all the criticism Colton got for being a virgin, which, I guess? Again, it’s none of our business, people.

Demi Is The First To Say It To His Face

She says she hasn’t dated a virgin since she was 12 years old, but she’s willing to try again. (I have a lot of questions.) Later, Demi tells the group that she said that to him.

It was a balloon, and Colton thought it was an apple, so you can see what we’re working with here.

Nicole Is The Voice Of Reason

Miami-based contestant Nicole says she would never bring up Colton’s virginity to his face, and she is in the right.

She does a card trick after her limo exit and literally steals a card from him. The card she dealt has a “V” on it. Ha.

The Girls Gab About How Attractive He Is

They say he’s too cute to be a virgin, which isn't really a thing, but FINE.

Erika Needs A Sit Down

During the cocktail party, she tells Colton that she wants to know the way and the how, which is a valid question if you're about to date and possibly marry them. Luckily, Colton has his answer rehearsed.

Caelynn Says He Kisses Well "For A Virgin"

How do virgins kiss versus non-virgins? I need some stats.

Yes, Colton is a virgin, and yes, the contestants and Colton himself brought it up myriad times during the premiere of his season. Let’s hope they got it all out, because who wants to hear about it for eight more weeks on The Bachelor? Give us at least until the Fantasy Suites, please!