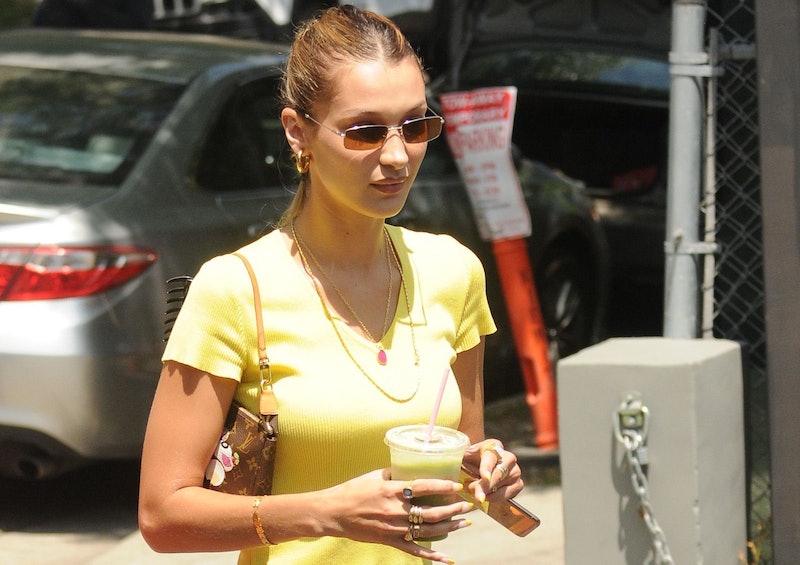 Bella Hadid, who has a penchant for designer pieces and high end labels, just proved that Zara sandals are just as chic as any luxury brand's shoes out there. Bella Hadid wore $50 Zara sandals (offered in sizes 5 to 11), and you can still shop them to copy her early-Noughties look.

On Aug. 9, Hadid stepped out in a colorful early-2000s outfit while out running errands in Los Angeles and drinking a smoothie. The model scraped back her blonde lob into two pigtail braids and accessorized the look with her trademark tiny sunglasses. To cinch her Lizzie McGuire-like outfit, the model wore a black mini skirt with neon flowers, a yellow V-neck T-shirt, and a Louis Vuitton baguette bag. (It can be argued that Hadid has single-handedly brought back the baguette bag into fashion, a la Carrie Bradshaw from Sex and the City in the early-2000s.)

To round off the look, Hadid completed the outfit with a pair of black heeled PVC Zara sandals. Then, to give her sandals a boost of color, Hadid layered two colorful anklets on her foot. One of the anklets were a yellow beaded one, and the other was a colorful woven one that looked like a friendship bracelet.

The sandals were clear, double-strap slip-on mules, accented with a transparent vinyl rounded heel. The heel is mid-height, clocking in at two inches.

The shoe also has a squared toe, which has been a massive trend this past summer. The exact shoe that Hadid wore was the Methacrylate Heeled Sandals with Vinyl Straps, which retails for $49.90 at Zara.

This isn't the first time that Hadid has worn Zara shoes. In May 2017, Hadid stepped out in New York City wearing an affordable outfit comprised of mall staples. The model wore a $125 off-the-shoulder gray sweater from Artizia, $98 Levi's Wedgie Straight Jeans, and sweet gingham platforms from Zara. The best part was that the ankle strap platforms were only $60 at the time.

As for the PVC shoe trend, the transparent vinyl look has been making its rounds on all sorts of A-listers' feet. The Kardashian and Jenners are major fans, and everyone from Kim to Kylie has worn a transparent shoe. On July 14, both Jenner and Anastasia Karanikolaou wore matching Maisie Wilen outfits with Yeezy vinyl flip flop heels.

Kim Kardashian also likes a good vinyl heel, and often wears stilettos with transparent straps to give her outfit an "invisible shoe" feel.

Priyanka Chopra proved that the PVC shoe trend works with business wear as well. On April 11, Chopra was part of a panel in New York City. The actress wore a skirt and off-the-shoulder blazer by Ralph & Russo, downplaying the "ladies who lunch look" with clear Sergio Rossi stilettos. The heels were pointed-toe, and had a row of studded pearls decorating the top of the shoe.

Everyone from Chopra to Jenner to Hadid are rocking the PVC footwear trend this season. Join the fad with the help of Zara's transparent sandals. When they're this affordable, it's worth a shot.