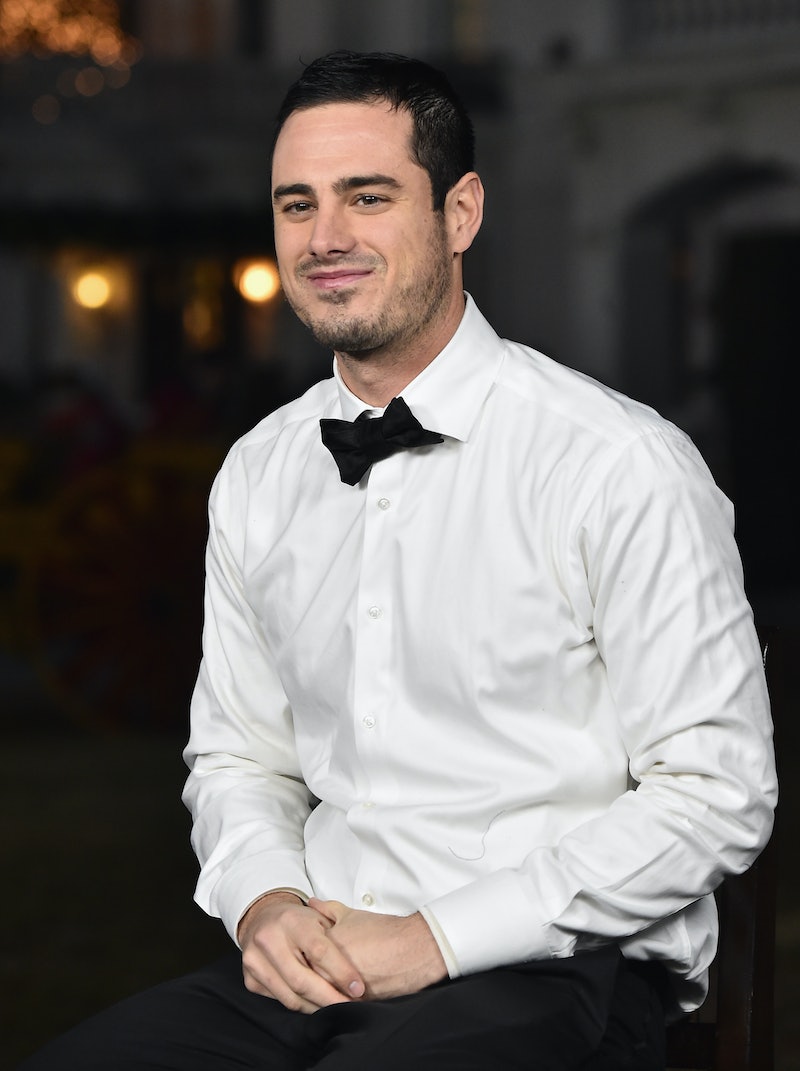 Bachelor Nation is abuzz, and people are starting to weigh in who aren't even a part of the current controversy. Ben Higgins' response to the Bachelor in Paradise allegations is just the latest, and he comes out in defense of the producers. But there are important takeaways from his statement whether you agree with him or not, so it's definitely worth a closer look.

Update: On Wednesday, June 14, Corinne Olympios' rep released a statement about the Bachelor In Paradise allegations to Bustle:

Update #2: On the evening of Wednesday, June 14, Jackson released a statement about Olympios' allegations to E! News:

Update #3: On June 20, an ABC spokesperson provided the following statement to Bustle:

Earlier: The former Bachelor added his two cents on Almost Famous, the podcast he shares with Paradise alum Ashley Iaconetti. On the show's June 13 episode, Higgins shared that he's never been in a situation within the franchise that he felt verged on dangerous.

"I was never forced into anything. I was talked through [by producers] as a friend in situations. If I was confused, they would sit with me and allow me to speak my mind and help me process. Yes, there is producing that is done. It’s a show! There are situations that happen that they need to get something out of, but it’s never a forced situation."

Before we go any further, it's important to note that Higgins has never been on Bachelor in Paradise, nor has he filmed any explicit scenes. But his input is important not in dissecting what actually happened in the alleged incident, but in understanding the relationships between cast and producers.

The filming of BIP Season 4 was recently suspended in Mexico after an alleged issue regarding a female contestant's ability to consent to an alleged inebriated sexual encounter on set, according to TMZ and PEOPLE.

It's still very early, so there's not much official information to be had, aside from the rumor that a producer has allegedly filed a lawsuit against the show. Warner Bros.' original statement on the events reads, "We have become aware of allegations of misconduct on the set of Bachelor in Paradise in Mexico. We have suspended production and we are conducting a thorough investigation of these allegations. Once the investigation is complete, we will take appropriate responsive action.” Bustle has reached out to both contestants for comment on the allegations, but have yet to receive a response.

Still, the lack of official word hasn't stopped former contestants from weighing in, and Higgins has said something illuminating. He trusts the producers and thinks of them as friends. He is so loyal to the crew that he's confident defending them in a situation for which he wasn't even present. That speaks really highly of the bond that he formed with them during his time on the franchise and how much trust he has placed in them.

We're still no closer to knowing what truly happened during Bachelor In Paradise Season 4, but Higgins giving a fuller idea of the bond between cast and crew is certainly interesting.