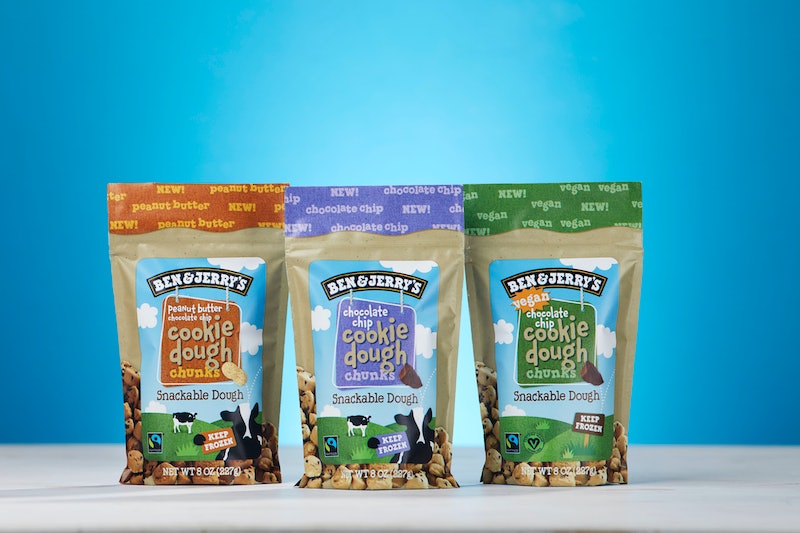 If this sweet treat looks somewhat familiar to you, there’s a reason for that: It was actually originally released in 2018. At the time, though, the snackable dough, which came in both Chocolate Chip and Peanut Butter Chocolate Chip flavors, was only available at two of Vermont’s five Scoop Shops — the one in Burlington, and the one at the Ben & Jerry’s Factory in Waterbury. Its limited availability left the rest of us non-Vermonters sadly doughless… but no more! Now, we, too, can join in the edible cookie dough party. Hoorah!

“Fans have been asking for ‘just the chunks’ for a while now,” Ben & Jerry’s Innovation Manager Jody Eley said in a press release — so last summer, they released them in the two aforementioned Vermont Scoop Shops in order to see if the demand was high enough for a wider release. Long story short: It was. “During a short market test in Vermont last summer, fans snatched up the dough in record time,” said Eley. “Bags flew off the shelves in mere days and stores could not keep the delicious dough bites in stock!” Accordingly, Ben & Jerry’s Cookie Dough Chunks will be rolling out at retailers across the United States as of April 3, 2019.

But this time, there’s something new in the mix, too: There may still only be two flavors, but one of those flavors is also available in vegan form — meaning there are three options to choose from total, all of which should suit a variety of dietary needs and preferences. (Alas, though, they do all contain wheat, so if you're gluten-free, they may be a no-go for you.) According to the press release, the Vegan Chocolate Chip Cookie Dough Chunks are made from the same edible dough found in the non-dairy version of the classic Ben & Jerry’s Chocolate Chip Cookie Dough ice cream flavor. Chocolate Chip Cookie Dough Non-Dairy Frozen Dessert is one of the newest additions to Ben & Jerry’s non-dairy line; it just arrived in February 2019. But given that it’s been one of the most requested flavors since the non-dairy line launched in 2016, it’s no surprise that it would eventually make its way to the lineup — and equally unsurprising that once it did, the dough itself would join the edible cookie dough collection, too.

What makes the snackable dough safe to eat is how the eggs and flour are treated when the stuff is made: The eggs are pasteurized, which kills all the bacteria in them and renders them safe to consume raw, while the flour has been heat-treated to kill foodborne pathogens. (The Vegan Chocolate Chip version, meanwhile, contains no eggs whatsoever, making that particular issue null and void.) You do still need to store Ben & Jerry’s edible cookie dough in the freezer, though, so don’t just go leaving it out. You're going to have a bad time if you do.