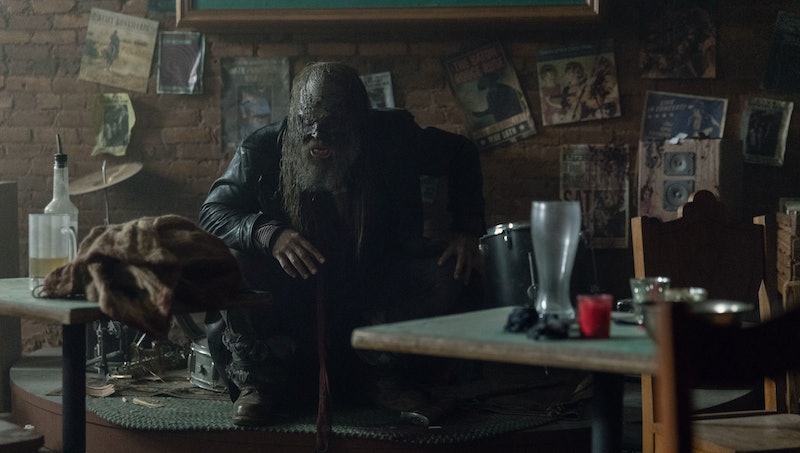 Beta has no intention of assuming the Alpha role, as his killing of a Whisperer who even suggested it indicates. In fact, he's still taking orders from Alpha in "Look at the Flowers." With a little GPS courtesy of Alpha's reanimated head, Beta finds himself at the Grand Hotel. Apparently, the proprietor or a resident had been a big fan because inside, Beta discovers records and souvenir posters from his time as the country recording artist Half Moon.

Before the zombie apocalypse, Half Moon was quite well-known (was he contemporaries with Jackson Maine?) since a concert poster proclaims, "The legend himself for one night only." His music was played throughout the country since, in Season 5 of Fear the Walking Dead, his album could be spotted when Daniel dropped the vinyl records he had acquired in Texas. When Beta's zombie mask was ripped in "Walk With Us," exposing part of his face, a Whisperer recognized him and mentioned his voice sounding familiar. So even before the official reveal, fans made the connection that Beta was that famous country artist from Fear.

Back at the hotel, Beta believes that Alpha has led him here to his old self. So he puts on his Half Moon Live in Concert album and heads up to the hotel's balcony to pull an Evita. He seems to be inviting the walkers toward him as the Half Moon version of him can be heard encouraging the audience to sing along with him to the lyrics, "I try to stand tall and knock down that big old wall." In this moment, Beta expresses more emotion than viewers have ever seen from him. He rips off part of his Whisperers mask and throws it onto his album cover while crying.

His mourning period for Alpha ends the next day. Inspired by a piece of paper with the words, "These two eyes see one truth," he tells Alpha's head, "Thank you. I see now." He stabs her brain and then mends his walker mask by using part of Alpha's own face. As he walks into the crowd of zombies who had been drawn to his music, Half Moon is Half Alpha. And though Beta has no intention of replacing his beloved Alpha, he's going to attack Alexandria with the vengeance of two Whisperer leaders.

"Look at the Flowers" treaded some water in its efforts to set up big moments like Beta's revenge, Negan going back to Alexandria, and Eugene meeting a sinister new person. Due to the pacing and the fact that The Walking Dead Season 10 finale has been postponed, not all of these storylines will be wrapped up in next week's penultimate episode. But Beta might be singing his swan song as he goes after Alexandria again to avenge his Alpha.