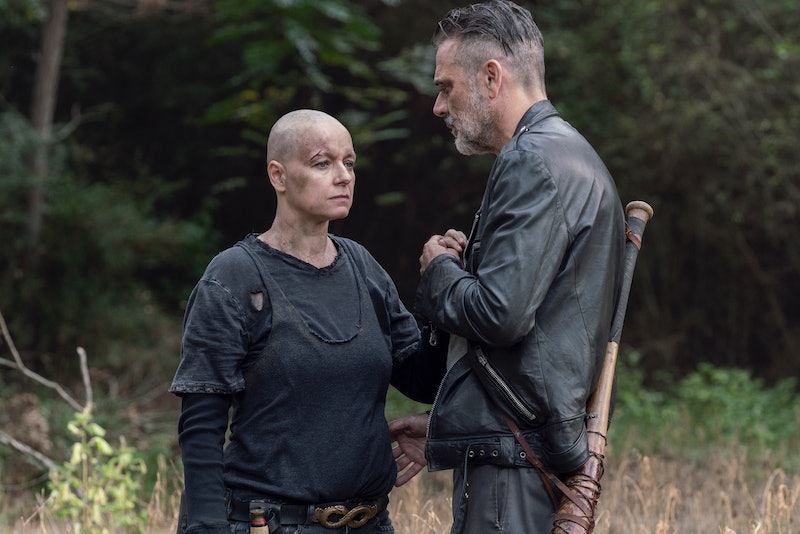 While the TV series really wanted you to believe that Negan had gone full Whisperer (never forget that sex scene ... or rather, please forget that sex scene), comic readers knew that Negan earning Alpha's trust was a con. Negan tried to communicate as much to Aaron when they encountered each other in the woods in "Walk With Us," but Aaron wasn't interested in listening. Yet, The Walking Dead put Negan's allegiance in question again when he captured Lydia to seemingly deliver her to Alpha. This proved to be completely unnecessary since Negan put her in an entirely different hut than he showed Alpha, begging the question: Why did he need to capture her in the first place? (The answer: So The Walking Dead could shamelessly manipulate the audience.) But it was all for the greater good since Negan fulfilled his comic destiny and ended Alpha's reign of terror.

Alpha's death in the comics is what led Beta to attack Hilltop and destroy it. Since that battle has already happened on the TV series, Beta may now turn his attention to Alexandria. Beta does lead the horde of walkers to Alexandria in the comics and expects that they'll take out the other community. The horde attack on Alexandria results in a major character death in the form of Andrea, who was still alive and Rick's wife. That means it's likely a significant character on the TV series may end up dead before things are over. But after Negan had presented Rick with Alpha's head, the former adversaries ultimately led Alexandria to a victory over the Whisperers' herd.

Just like Rick and Negan were an unexpected team, Carol and Negan could become the next leadership duo on the show to win this war. In a deviation from the comics, "Walk with Us" revealed that Carol was the one who freed Negan from his Alexandria prison cell. Since they've already formed an alliance and successfully killed the Whisperers leader, they may fight together to protect Alexandria.

That would be an exciting turn in both Carol and Negan's stories. Unfortunately, though, Carol's not the most popular person right now, so the communities may not be impressed with Negan's espionage — especially if it means another attack from the Whisperers.

So maybe they won't get a chance to fight on the frontlines. That would be a mistake since Alexandria desperately needs all the skilled fighters it can get. But even with their combined skills, Carol and Negan couldn't kill every zombie in the horde. That's where Michonne may come into play. She left to find some weapons strong enough to take out a horde and if she wants to ensure that Alexandria survives, she better return before Beta finds out his beloved Alpha is dead. Because while the Whisperers are not long for this world, Beta's vengeance is going to be brutal. But get ready, because after this (seemingly) final attack by Beta, The Walking Dead is most likely headed to the Commonwealth of the comics where a whole new group of people will antagonize our characters.

More like this
Netflix Shut Down 'Bridgerton' S3 Rumours About A “Very Dark” Storyline
By Bustle
'The Queen’s Gambit' Season 2 Tweet Wasn’t From Anya Taylor-Joy
By Mary Kate McGrath, Jack Irvin and Grace Wehniainen
'RHOSLC' Star Jen Shah Refuses To Do A Post-Sentencing Interview With Andy Cohen
By Brad Witter and Jake Viswanath
Bill & Frank’s 'The Last Of Us' Episode Has Twitter Emotionally Wrecked
By Alyssa Lapid
Get Even More From Bustle — Sign Up For The Newsletter
From hair trends to relationship advice, our daily newsletter has everything you need to sound like a person who’s on TikTok, even if you aren’t.