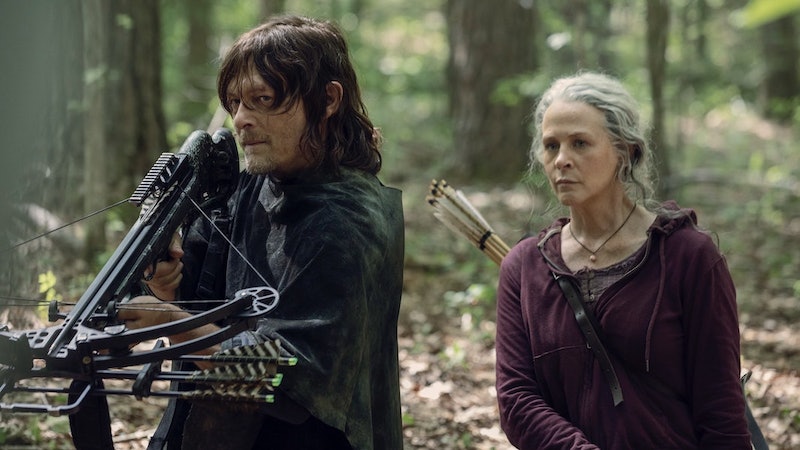 As the global coronavirus (COVID-19) pandemic takes its toll on Hollywood, The Walking Dead Season 10 finale will be delayed due to the ongoing health crisis. In a statement obtained by Bustle, an AMC spokesperson said “current events have unfortunately made it impossible to complete post-production” of the Season 10 finale, so the current season will end with Episode 15, titled “The Tower,” on Sunday, April 5. The season finale will air as a special episode later in the year.

AMC added that the first eight episodes of Season 10 will be available for free on AMC’s website and app on the heels of the April 5 episode up until Friday, May 1. The Season 10 production news comes after the network shut down pre-production of Season 11 of the zombie apocalypse horror series on March 13. Similarly, Fear the Walking Dead and The Walking Dead: World Beyond have also been delayed indefinitely due to the global health pandemic. AMC joins the ranks of other major Hollywood studios that have halted TV and film productions due to the virus.

The delay comes a few days after longtime Walking Dead regular Danai Gurira made her final appearance as Michonne in the March 22 episode, “What We Become.”

Greg Nicotero, executive producer and visual effects artist on the show, addressed the finale delay in an Instagram comment on The Walking Dead’s page on Tuesday. “Post production for those who are curious involves VFX, music, sound mixing and sound FX. This process usually goes up to about 3 weeks from air date,” Nicotero wrote. “I’m finding out about this same time you guys are and it’s disappointing but the episode will not disappoint.” He concluded, “Be safe everyone.”

AMC renewed The Walking Dead for Season 11 last October. While production has been postponed due to the outbreak, showrunner Angela Kang told The Hollywood Reporter that writers are working on storylines in quarantine. “We're well set up to work remotely,” Kang said on March 13. “I'm a tech head. We do video conferences regularly. On a normal basis, I'm very stringent about, 'If you're sick, don't come into the office.’” She added, “The [writers’] room will continue to run.”