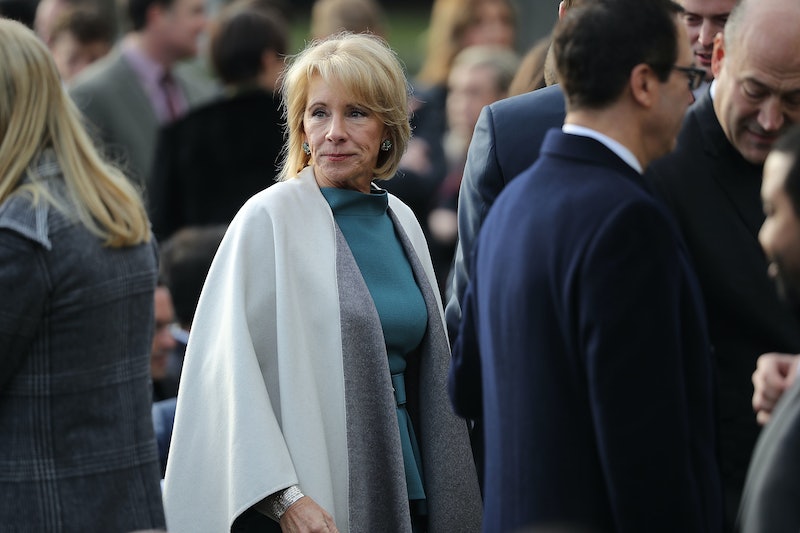 The Department of Education under Secretary Betsy DeVos is engaged in an effort to undo Obama-era regulations governing loan forgiveness among students who have been defrauded by their universities. While these students represent only a fraction of all Americans with student loan debt, experts say they're among the most vulnerable, and that DeVos' proposed changes would make it more difficult for students to fight back against schools that failed to provide the education they were promised.

Under the Obama administration, students who had been defrauded by their universities could apply to have their loans forgiven through a regulation known as borrower defense. Now, the Department of Education is reportedly considering new requirements for students seeking loan forgiveness. The changes include requiring individual students to prove that their colleges had intentionally deceived them, demanding that students meet a higher standard of evidence while proving their claims, and permitting a shorter timeframe in which to do so.

The Department of Education "came to the table during negotiations with a much stricter proposal in terms what the borrowers have to do," says Karen McCarthy, the director of policy analysis for the National Association of Student Financial Aid Administrators. She characterized that proposal as the department's "starting point" in negotiations that will continue next month.

Students of for-profit colleges are at least twice as likely to default on their loans compared with their peers from public schools, according to a report published in October by the National Center for Education Statistics. Back in December, the department issued guidelines specific to former students of Corinthian Colleges, a now-bankrupt collection of for-profit secondary education companies that was shown to have misrepresented its job placement rates to prospective students. Where those students had been entitled to full federal student loan relief during the Obama administration, DeVos announced a new set of criteria for claims: The amount of loan forgiveness will be tied to the students' current earnings.

If a former student of Corinthian Colleges is earning less than 50 percent of the salary of her peers outside Corinthian, she'll be entitled to full loan forgiveness. But if she's making more than the average salary, her loan relief will be determined by her earnings. If she's making anywhere over 50 percent of the average earnings, for example, she'll be eligible to have half of her loans forgiven at most. Some students will have as little as 10 percent of their loans forgiven.

“No fraud is acceptable, and students deserve relief if the school they attended acted dishonestly," DeVos said in a December statement announcing the change. "This improved process will allow claims to be adjudicated quickly and harmed students to be treated fairly. It also protects taxpayers from being forced to shoulder massive costs that may be unjustified.”

The Obama administration introduced a set of rules governing student loan repayment among defrauded students in 2016, after for-profit institutions including Corinthian Colleges, ITT Tech, and DeVry University were found to have committed fraud in their efforts to lure prospective students into their programs. Taken together, recent moves by the Department of Education under DeVos show a consistent effort to undo those Obama-era regulations regarding student loan forgiveness among defrauded students. Critics say the changes will make it more difficult for these students to have their loans forgiven.

"It's always been quite difficult to prove fraud," says Alan Collinge, the founder of Student Loan Justice who's advocating for a bill that will return standard bankruptcy rights to all students. "Unless you have it in writing, it's very difficult to prove."

DeVos has spoken out against a one-size-fits-all approach to student loan debt relief. “Under the previous rules, all one had to do was raise his or her hands to be entitled to so-called free money,” she said in September. While she's said that tightening the rules will protect taxpayers — who often pick up the tab when schools can't be held accountable for their actions — student loan activists say that tying loan relief to earnings will slow down the department's efforts to process claims, which are already backlogged.

The proposals reportedly under consideration aren't DeVos's first swing at overturning Obama-era rules governing student loans. In July, 18 state attorneys general sued DeVos and the Education Department after it froze borrower defense rules right before they were scheduled to take effect. In March, the department reversed a rule that blocked loan guarantee agencies from collecting fees off borrowers who made amends within 60 days of being handed a default notice. The following month, DeVos also hit pause on an Obama-era effort to consolidate student loan repayment services into one web portal. It's not uncommon for student borrowers to owe money to more than one lender; 40 million Americans collectively carry more than a trillion dollars in student debt.

"We've seen a big decrease in the federal and state investment over the past several years, decades even," Megan Coval, vice president of policy and federal relations at the National Association of Student Financial Aid Administrators, tells Bustle. "And so because of that, [more] students and families are having to turn to loans to finance higher education."

The Department of Education scheduled three, three-day meetings between November and February to discuss changes to rules governing borrower defense. While student loan advocates have vocally criticized the proposed changes, McCarthy of the National Association of Student Financial Aid Administrators says it's in their best interest to try to come to an agreement with the department — otherwise, the agency will be free to roll out its own regulations after the third and final meeting during the week of February 12.