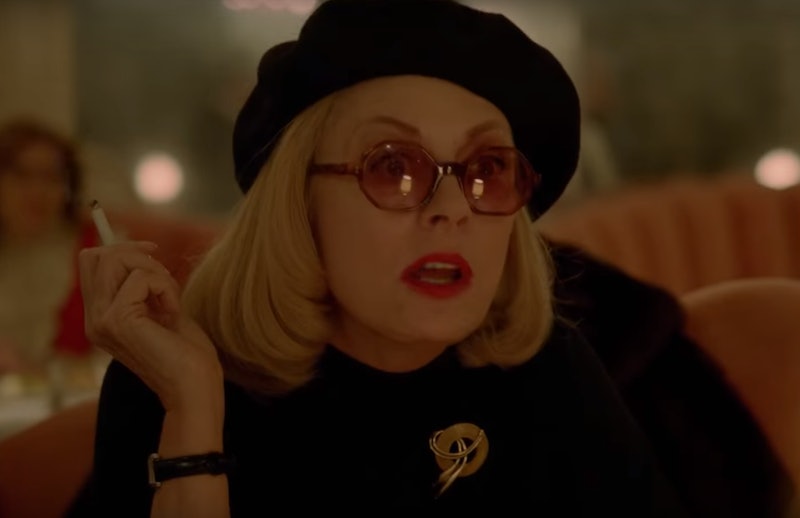 As the first season of Ryan Murphy's Feud comes to an end, fans are going to see the waning days of the series' two legendary stars' lives. While the show is unlikely to reach 1989 in the finale, the year Bette Davis' final film, Wicked Stepmother, was released. Davis passed away just eight months after the film's premiere, and sadly, she wasn't proud of her final picture.

In an Entertainment Tonight interview from January '89, Davis explained to Leonard Maltin that she left the production after just one week of filming, despite being the undisputed lead. While the icon was originally excited by the idea of playing a witch in a film using modern (at the time) special effects, she reportedly ultimately clashed with director Larry Cohen over her character and the direction of the story.

When Cohen allegedly wouldn't make changes to accommodate Davis, the star decided she would rather leave the project than stay with a film she didn't believe in. When Maltin wondered if it was worse for people to know she walked off the set than having them assume she left the project to have dental work done, as Cohen claimed, Davis told the respected critic, "The lesser of the two evils was my courage in not returning."

Cohen saw things quite differently. In an essay entitled "I Killed Bette Davis" written for Film Comment in 2012, the director explained his side of the story. He claimed that Davis' health was rapidly declining, and when she left to have dental work done after a week of filming, she didn't tell him how bad her condition was. Having written the film for Davis specifically, the director was prepared to do whatever he had to do to accommodate the star. Cohen wrote,

"After seeing herself in the dailies that Saturday, she’d rushed to New York to the one dentist she trusted. He informed her that several more teeth needed to be extracted and it would take weeks to create a new set of dentures. In her condition, she could never have faced the camera. But she couldn’t admit that publicly. To have left the movie for medical reasons might’ve made her uninsurable. Without insurance she’d never work again."

He further alleges Davis admitted she left due to illness in a sworn statement she gave to attorneys for the insurance company.

In order to work around Davis' absence, Cohen gave Davis' character Miranda a daughter, Priscella, and wrote in that the two women shared a body. When they swapped places, the other person would take up residence in a cat. Yes, it is as confusing as it sounds. This led to actor Barbara Carrera playing the bulk of the role. In her ET interview, Davis estimated she was only in roughly 15 minutes of the film.

Wicked Stepmother was a far cry from the films Davis made at the peak of her career. While the character of Miranda was certainly a femme fatale with a sharp sense of wit, the story surrounding her was silly and at times vulgar, something Davis never wanted her career to veer into. Anyone who has seen Now, Voyager or even Whatever Happened to Baby Jane? should have no problem understanding why the actor may have seen Wicked Stepmother as a film that was not up to her standards. It's a bad movie that doesn't really aspire to be anything more.

The most heartbreaking part of Wicked Stepmother being Davis' final film appearance is that she seemed eager to do another film. She informed Maltin, "I am praying on my knees everyday to get a good script in 1989." (Note, she says these words while drinking from her good luck goblet, in true Davis fashion.)

The truth surrounding what happened on the set of Wicked Stepmother is just as murky as the story behind Whatever Happened to Baby Jane? — was it pride that made Davis leave or quality? The world may never know for sure. Either way, Wicked Stepmother remains a footnote in Davis' legendary career, and knowing she was still willing to protect her iconic reputation in the film industry at any cost, even at the age of 80, should only make you love her more. It's just further proof that Davis was a true star right until the very end of her storied career.

More like this
Twitter Is Saying The Same Thing About Jill Scott Winning 'I’m A Celeb'
By Sophie McEvoy
The First Trailer For 'That '90s Show' Includes So Many Nods To The Original Series
By Jack Irvin, Alyssa Lapid and Grace Wehniainen
Kate Winslet Spoke Candidly About Filming A TV Series With Her Daughter
By Sabah Hussain and Sam Ramsden
Jude Bellingham’s Superstar Football Talent Runs In The Family
By Maxine Harrison
Get Even More From Bustle — Sign Up For The Newsletter