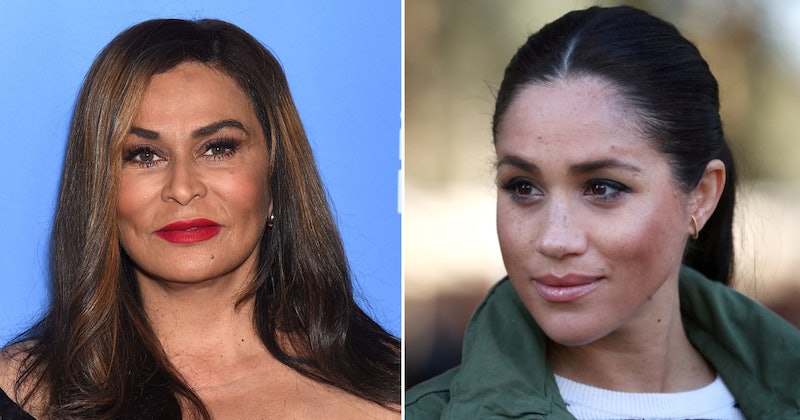 It looks as though Tina Knowles, aka Beyoncé's mum, loves Meghan Markle as much as the rest of us, and I am so here for it. Beyoncé and Solange's mum praised the Duchess of Sussex while at the opening night of the art exhibition Soul Of A Nation: Art In The Age Of Black Tina Knowles Power 1963-1983 at Los Angeles' Broad Museum. There's literally nothing cuter than what she had to say about Markle.

The fashion designer known for her ready-to-wear range, House Of Deréon, and for being the parents of two of the world's biggest mega stars, had some very sweet comments to share about the Duchess. Talking to Us Weekly, Knowles-Lawson said: "I mean, I think she's a beautiful, intelligent, independent young woman." And who can argue with that?

Alongside acting, Markle has always been known for her feminism and her wonderful humanitarian work. She also became one of the very few (if not the only) black or biracial people in history to join the British royal family after marrying Prince Harry back in May 2018. And Knowles, gushed at the fact the Meghan Markle is making waves, saying:

"I think it’s amazing that she got that opportunity and that she is a great representation for our people." She added. "It's really wonderful."

But Knowles-Lawson is not alone. Markle has loads of famous admirers and friends, including fellow actress Priyanka Chopra, Suits co-star Abigail Spencer, and, of course, tennis legend Serena Williams, who attended her wedding and baby-shower. And let's not forget that Miss Beyoncé Knowles-Carter herself is a huge fan of the Duchess too.

Beyonce and Jay-Z surprised fans in February when they paid homage to the 37-year-old Duchess Of Sussex at the 2019 Brits Award. The Carters, who won Best International Group, recorded an acceptance speech video showing the two of them standing in front of a portrait of Meghan Markle, before turning around and looking at the painting in appreciation. This was a nod to their music video Apesh*t from their self-titled album Everything Is Love. The video, which has more than 160 million views on Youtube, shows the pair standing in front of the Mona Lisa in the Louvre. The Carters paying their respects to Markle at a time when the British media has been less than kind to the mum-to-be was monumental.

It's no secret Meghan Markle has been given a really tough time by the press in recent months. She's been accused of writing too neatly, scrutinised for holding her baby bump and has even been blamed for her husband's balding. Sadly, the new member of the royal family can't seem to catch a break at the moment. But famous mates including George Clooney have come to Markle's defence. Speaking to Who magazine, Clooney said: "She has been pursued and vilified and chased in the same way that Diana was and its history repeating itself."

So Tina Knowles taking some time out to praise Markle really feels like a moment of heart-warming solidarity. It's great to see a member of one royal family bigging up another.