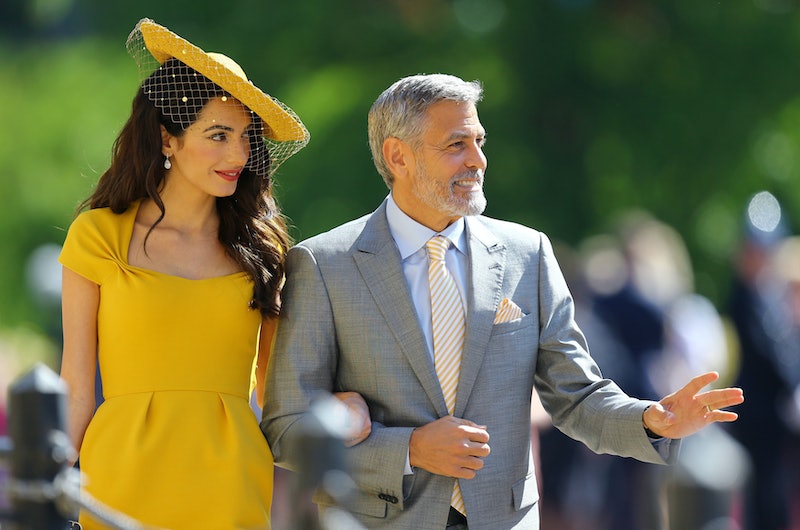 George Clooney is taking a stand against the awful mistreatment of Meghan Markle by the media. While promoting his new Hulu film Catch-22, Clooney took the opportunity to discuss how his good friend is being wrongfully treated and hounded by the press all whilst being heavily pregnant. Clooney also mentioned how this whole situation is eerily similar to the treatment of Princess Diana, Markle's mother-in-law.

An Australian publication called Who Magazine reports that Clooney reacted to the horrors the Duchess has faced since being flung into the public-eye after her partnering with Prince Harry. "She’s a woman who is seven months pregnant," he explained. "And she has been pursued and vilified and chased in the same way that Diana was and its history repeating itself."

From holding her baby bump, to being blamed for Harry's balding, to even being chastised for having nice handwriting, on top of the racial-undertones used by her critics, it seems Meghan Markle can't do anything without an onslaught of heavy judgement. "We’ve seen how that ends," Clooney says, most probably in reference to the surveillance-like stalking Princess Diana was faced with by the paparazzi all the way up until her untimely death in 1997.

Clooney went on to say, "I do want to say, they’re just chasing Meghan Markle everywhere, she’s been pursued and vilified." Sadly, it does feel very similar to Princess Diana's relationship with paparazzi who followed her non-stop during her life. Diana tragically died in a car crash in Paris with Dodi Fayad whilst being followed by paparazzi. As the Telegraph reports, an investigation found that Princess Di was in fact unlawfully killed by paparazzi photographers and Henri Paul, her driver who was three times over the limit.

Clooney went on to discuss in Who Magazine the leaked letter from Markle to her father back from 2018 illustrating her complete lack of privacy.

"I can’t tell you how frustrating that is, just seeing them broadcast a letter from a daughter to a father, she’s getting a raw deal there and I think it’s irresponsible and I’m surprised by that."

Since the release of her heartfelt letter pleading for her father to stop talking to the press, Markle has also come under fire for her handwriting and been unfairly been labelled a "a narcissist" by her half-sister, as the Evening Standard reports.

It is encouraging to see more people coming out in support of Meghan Markle, including several close friends who spoke out in an anonymous interview with People Magazine. The horrible treatment she is facing on a daily basis, all while being seven months pregnant, should be rightfully called out. And although Markle externally might appear unaffected by the press and has been seen beaming at a number of public events, her letter to her father clearly states otherwise.

Joining the Royal family does entail becoming a public figure, but as George Clooney explained, her treatment is completely irresponsible. Here's hoping that these comments may serve as the wake up call people need. Now more than ever, Meghan Markle should be given space to live her life happily and healthily outside of her public responsibilities.