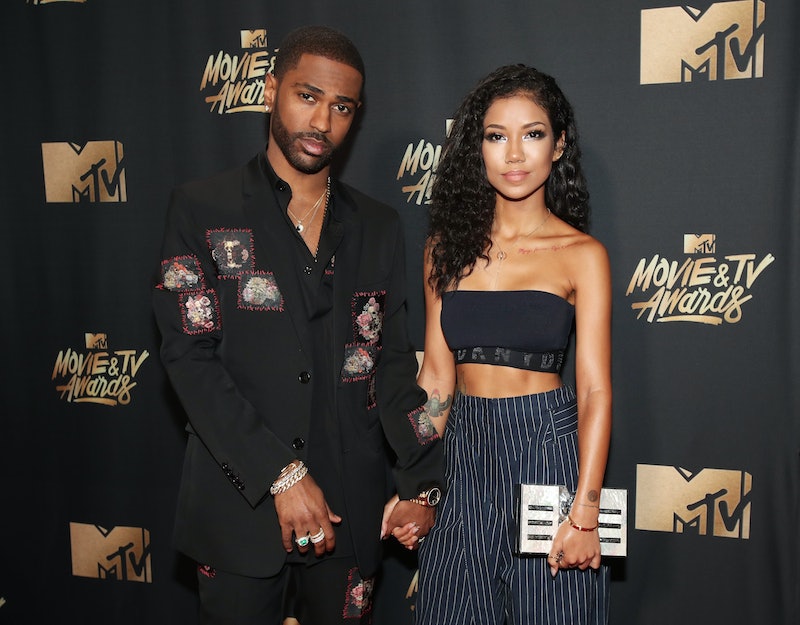 Big Sean might be "single again," but that doesn't mean he bears any ill will toward his ex. Jhené Aiko is featured on Big Sean's "Single Again" and this music collaboration provides insight into the pair's past relationship. This is the second single Big Sean has released this week from his upcoming album Don Life and Ty Dolla $ign is also featured on the track. But considering the subject matter, it's Aiko's presence that really has fans excited. Because these exes are showing how you can still have a good relationship, even if you are both "Single Again."

While Big Sean and Ariana Grande's former relationship got some attention when Grande released "Thank U, Next" in late 2018, Big Sean was actually linked to Aiko at the time. For about three years, Aiko and Big Sean dated one another on and off, and it wasn't until March 2019 that Aiko confirmed they had broken up, according to BET. Yet, the couple — who had collaborated before on the album TWENTY88 — seems to have remained on good terms, if Aiko's background vocals on "Single Again" are any indication. In fact, it sounds like the song was directly inspired by their amicable split.

Right around the time that Aiko made their breakup official, Big Sean opened up in a series of Instagram videos about how he had been going to therapy. And this work he did for his mental health comes across in the "Single Again" lyrics. "Lookin' for the love in somebody else/That I prolly shoulda gave to myself/Cycles I need to break in myself/If I'm alone, I'm second to no one else," he sings on the track.

Based on the lyrics, it seems that Big Sean and Aiko's breakup was not necessarily about not having feelings for one another anymore, but about Big Sean's desire to work on himself. "I'm single again/Told her we'll be better off friends/Maybe I should just focus on me/And slow down, don't rush romance ... Blaming you is just so easy/But maybe the problem's me," the chorus goes. "Maybe I should spend this time on me."

As Big Sean shared in a mindful Twitter thread ahead of the new song's release, "Single Again" is deeply personal for him as he has been striving to love himself before loving others. "I never knew that I didn't know how to be alone in life. I always would find so much joy n happiness in a relationship or being with friends, but I didn't know how important it was to be in a relationship with yourself," he tweeted on Thursday, July 25.

Big Sean continued, writing that, though it might be scary to commit to working on yourself, it was worth it. "But when you work on yourself and bring your best self to something," he wrote, "I believe that's truly how to experience a love where you are bringing happiness and joy and not dependency."

Aiko being on the track appears to solidify the healthy headspace that Big Sean has achieved. After all, if these two resented one another, she probably wouldn't have wanted to work with him. Aiko herself indicated on social media back in May that she's in a good place with her ex-boyfriend, clarifying that her emotional breakup song "Triggered" was "NOT a diss song" about Big Sean. She even shared a photo of her and Big Sean hanging out on Instagram with the caption, "Today was a good day."

In an Instagram post in April, Aiko wrote about how she'll always love Big Sean, and now she is truly standing by those words with her supportive contributions to "Single Again." As this former pair is highlighting, breaking up doesn't have to be an insult to your partner, it can just be about doing what's best for you and loving yourself first.