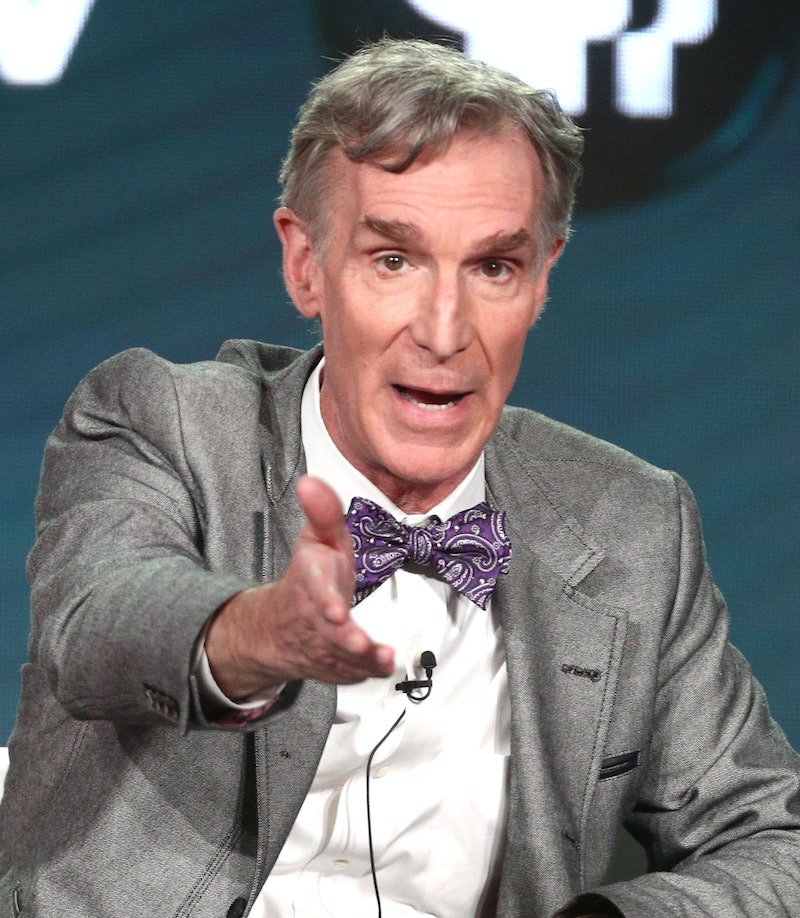 Bill Nye has been known to millennials as "The Science Guy" ever since his days teaching a generation about the joys of science on PBS's Bill Nye The Science Guy. But now that we're all grown up (or trying to be), Nye isn't leaving us behind. In Season 2 of Netflix's Bill Nye Saves The World, Nye is back and sharper than ever, and he's moving on from simply educating viewers to urging them to take action, stay curious, and, most importantly, make sure their voices are heard. So how can we embrace science and make actual change in the world? Nye recently spoke to Bustle about climate change, being called a social justice warrior, and what still manages to fascinate him (spoiler: quite a lot). Here are some things we learned from the ultimate science educator himself.

He's Fascinated By One Mundane Thing That We Take For Granted

Even the most experienced scientists can find things that still pique their curiosity. In addition to being endlessly fascinated by particle physics, the coolest thing in Nye's opinion is much easier for non-scientists to understand: agriculture.

"When I was 9 years old... there were predictions that everyone would starve to death if the world's population doubled. Well, it's more than doubled. It's substantially more than doubled," Nye says. "And although there is still a huge problem of poverty [...] you could feed everybody, if you could find a way to distribute what we're able to produce… Humankind is going to figure out how to feed us all."

But Nye stresses that humans have to work together in order to figure it out. "It's like a Star Trek episode where there's a whole planet run by one species. And that's us. We are in charge of the whole place now, and it's a different perspective I think from anybody's ancestors," Nye admits. "In order to succeed as a species in the coming decades, we need to look at the world as our oyster to shuck or farm or whatever it's going to be. One of the big insights for everybody I think is that farming is not natural. If humans aren't farming, [the land] goes back to whatever it was — a forest or a meadow or something. So, I think that insight is important for everybody."

He Has No Time For Climate Change Deniers

Figuring out the answers to scientific problems means that, you know, you have to actually believe in science. And that's a big issue these days for Nye. "We have a situation in which there's a huge movement to be against science, that one's own opinion, based on anecdote or your own incomplete visions of the natural world, is somehow every bit as valid as the overwhelming body of scientific evidence," Nye says. "There are people running around right now insisting that the world is flat. What? Are you joking me? It's the 21st century — what is wrong with you?"

And Nye doesn't mince words when it comes to America's current administration and its view of climate change. "There's this belief that the world's climate is not changing, that the changes are not significant. Scott Pruitt is in charge of the Environmental Protection Agency of the world's most influential country and he is essentially anti-science. You just can't have that and succeed. The United States — or any country — cannot compete economically and deny science. You're not gonna stay in the game."

... But He's Not About To Sit Back And Just Complain

If you're pro-science and believe in the ticking clock that is climate change, what is there to do? It's easy to feel helpless about the state of things, but Nye's advice is pretty simple. "The big thing I tell everyone is vote. If you want to make change, you gotta vote," Nye says. "We had a March for Science, and I've been communicating with the March for Science people again, probably to do another one. We have to raise awareness of the importance of science to our economy and our quality of life. So, let's go! We'll see you out there — Earth Day, April 22."

Nye's blend of science and activism — he notably debated Creationist Ken Ham in 2012 — has led some to call him a "social justice warrior," the implication being that he's more interested in twisting his scientific expertise to support liberal politics. While one would think that Nye would be used to criticism from being in the public eye, this sort of talk smarts. "Here's what breaks my heart. Here's how you can get to me. I'm a mechanical engineer, and I am troubled by the people who apparently dismiss engineering as a scientific undertaking," he says.

"I took heat transfer, fluid mechanics, I took six semesters of calculus... What do you think we do all day? Where do you think cars come from? Gee whiz, everybody! I want us all to pull together and resolve climate change and provide clean water and renewable, reliable electricity and access to the internet to everyone on Earth... If you call me a social justice warrior over that, well, okay. Knock yourself out. These are all, at some point, engineering problems, and I want to solve them."

Right now, that "pulling together" thing seems to be particularly difficult — America is more divided than ever, with more disagreement both in the government and across our kitchen tables. But first, according to Nye, we have to work toward giving everyone the same opportunities. "People here in the United States are being left behind. We're — and by we, I mean people in the scientific and engineering communities — are having trouble reaching people in rural areas, reminding them of the great value of science and the great value of participating in the democratic process… This divisiveness is very troubling, and to me, it's connected to an anti-science point of view," he says.

While it may seem like doom and gloom, that's not quite the case, and Nye notes that change doesn't happen overnight. "Stay tuned!" he jokes. In all seriousness, though, Nye says that the key to getting the country (and the climate) back on the right track is simple — we have to get out there and do something about it. And, though he jokingly adds that everything can be solved by watching his Netflix show, Nye goes back to emphasizing the one key way we can change the country, and hopefully, the world. "We all have to vote, we have to embrace science," he says. "We have to know that people are more alike than they are different."