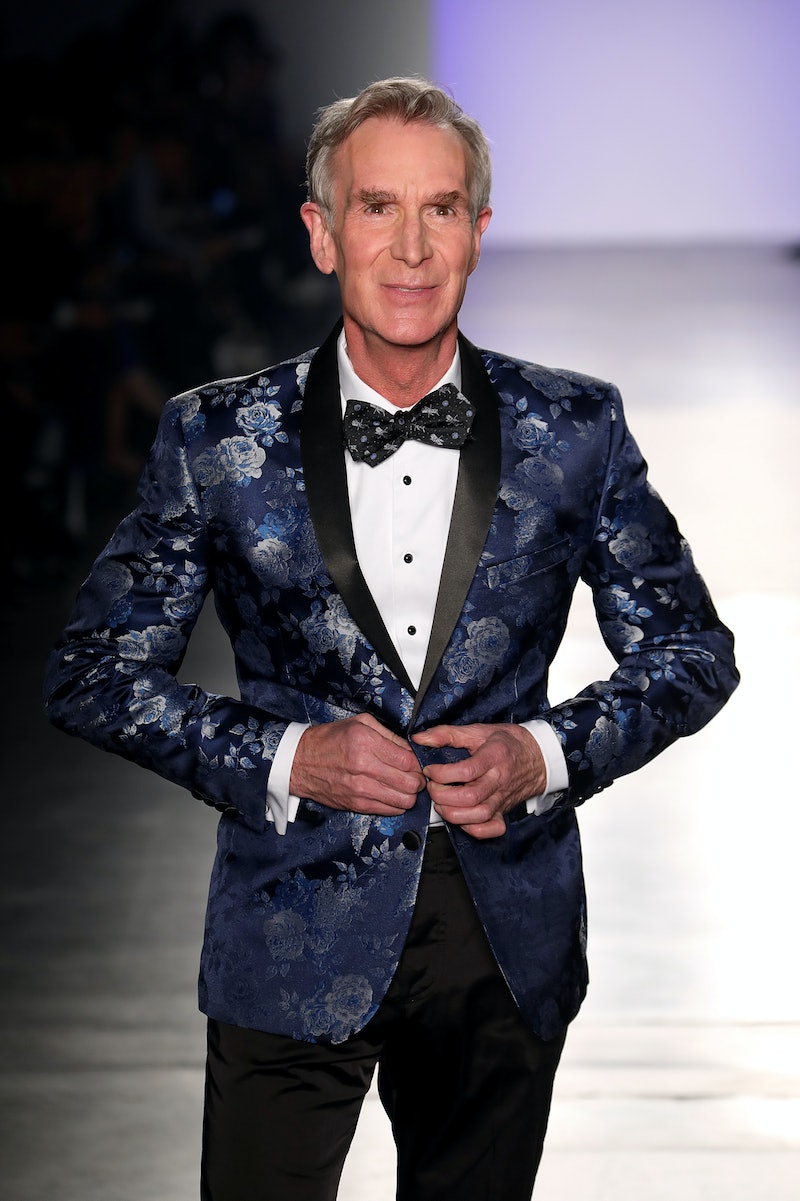 Even though the television personality has his own iconic theme song — Bill! Bill! Bill! — Bill Nye walking to Lizzo on the runway at New York Fashion Week seemed so right, it had fans rooting for him to pursue a modeling career. On Wednesday, Nye danced down the runway at the the Blue Jacket Fashion Show at Pier 59 Studios, as per People. During the event, Nye wore a blue floral tuxedo jacket, designed by Nicholas Graham, and made the most of his runway moment, dancing to "Juice" by Lizzo, which played in the background.

While other participants in the event seemed to go for a classic walk, Nye decided to bust a few moves as he made his way down the runway. Jessica Weiss captured Nye's runway moment on TikTok, and reported that she knew the video would go viral, according to CNN. "When he started dancing to 'Juice' by Lizzo I knew it would be very popular because they are both iconic," she told the news outlet. She added: "This is my third fashion week and I've never seen anyone have as much fun as Bill Nye when walking down the runway.

On Twitter, fans reacted to the video of Nye, with one user tweeting the video of the television personality, writing, "please tell me what designer had bill nye walking im crying." Another fan appreciated Nye's modeling skill, writing, "He’s not Bill Nye the Science Guy anymore, he’s Bill Nye the Flyest Guy", while one other user added, "bill nye dancing down a runway to juice by lizzo is something i didn’t know i needed."

For Nye, the fashion show had a special significance, as the event benefitted the Prostate Cancer Foundation, which funds research to cure the disease. Nye noted that his father had prostate cancer in an interview with Addy Media following the show. He also added a scientific perspective on the cause, saying, "You can test for this prostate hormone. So I think that we are, and by ‘we’ I mean researchers, are close to solving this problem and so to support this cause is cool."

Several other celebrities participated in the event, including Mario Cantone, CNN host Don Lemon, former NFL player Victor Cruz, and CC Sabathia of the Yankees, according to People. This also wasn't the first year Nye participated in the Blue Jacket charity show — the television-personality also walked for the cause in 2017. He might be an infrequent model, but with those dance moves, it seems like it was only a matter of time before Nye got his viral runway moment.

More like this
Britney Spears Shares & Deletes Photos Of Justin Timberlake From 22 Years Ago
By Jake Viswanath
'Friends' Star Maggie Wheeler Offers Support To Matthew Perry After Reading His Memoir
By Alyssa Lapid
Mel B Thinks These Celebs Should Play Them In A Spice Girls Movie
By Alyssa Lapid
'That '90s Show' Star Callie Haverda Got Advice From Mila Kunis & Ashton Kutcher
By Brad Witter
Get Even More From Bustle — Sign Up For The Newsletter
From hair trends to relationship advice, our daily newsletter has everything you need to sound like a person who’s on TikTok, even if you aren’t.