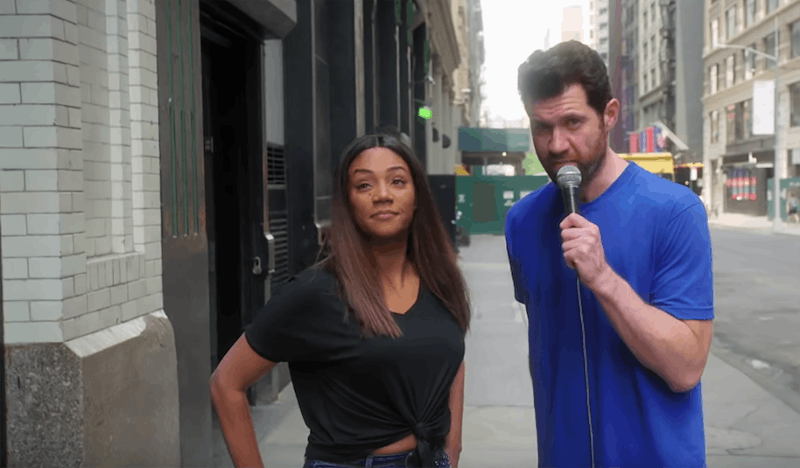 Billy On The Street TV/YouTube

The film Hocus Pocus is a Halloween cult classic. It's nearly impossible to confirm that the 1993 film is getting a sequel or a reboot, so Billy Eichner and Tiffany Haddish's Hocus Pocus remake video is here to answer that question for fans.

The two comedians teamed up for a Billy On The Street segment in which the host, who is gay, and his guest, who is a woman of color, looked for a third person to join their coven. Oh, was that part not clear? They're planning their own remake of Hocus Pocus. With Haddish and Eichner starring as two of the Sanderson sisters. The pair just needed one more person to round out their more diverse trio — and weren't shy about the casting call. "We're gonna make a more inclusive Hocus Pocus," Eichner announces to the first person they stop on the street, "Are you straight and white?"

The hilarious sketch is indeed, as Eichner labeled it on YouTube, "a witch hunt". A literal witch hunt. The fun kind! They do exist! As a side note, it's kind of amazing that Billy On The Street still works. Like, how is he not too famous for this? Remember when Nicki Minaj even posted a clip of his show to Instagram?

Maybe it's better to not question it, and simply enjoy Haddish and Eichner on the hunt for a diverse Hocus Pocus cast instead.

As a duo, they might actually be magic. "We need Asian witches!" exclaimed Eichner seemingly moments before two women from China (as one of them mentioned) headed their way. When it turned out that the person they were speaking to also identified as gay, Eichner was enthralled. Did he yell "Crazy witch Asians!" out of excitement, you may be wondering? Of course he did.

Haddish, who typically steals the scene, is content to play Robin to Eichner's Batman here. When he starts wildly gesturing at people to move aside for Haddish to walk by, she plays along with it. For example, the comedian subtly flipped her hair when the host yelled "[Tiffany's] profile is growing!" at passersby. The best part is, since she is Tiffany Haddish, Eichner doesn't have to make too much of an effort to get her recognized! No spoilers for the moment they stop by a big fan, but know that it is super precious.

It takes an encounter or two before Haddish warms up to the game, but by the time they meet a woman from Brazil, she's all in. Haddish instantly bursts out into a samba and just like that, #SheReady. (She does her own mouth percussion for it and everything.) By the time they hit the part that's mostly Eichner storming up to locals for comment, the sketch really hits its stride.

To be clear, there is no Hocus Pocus remake on the way. Not one that stars Eichner and Haddish, at least — or not yet. At this point, the rumors are too difficult to keep track of to know for sure! Plus, Eichner coining the term "Woke-us Pocus" feels like a guarantee that fans will get one. Maybe even in the form of a five-minute video posted to his website? As long as Haddish is involved, that's all that really matters. Disney, let these two run amok!