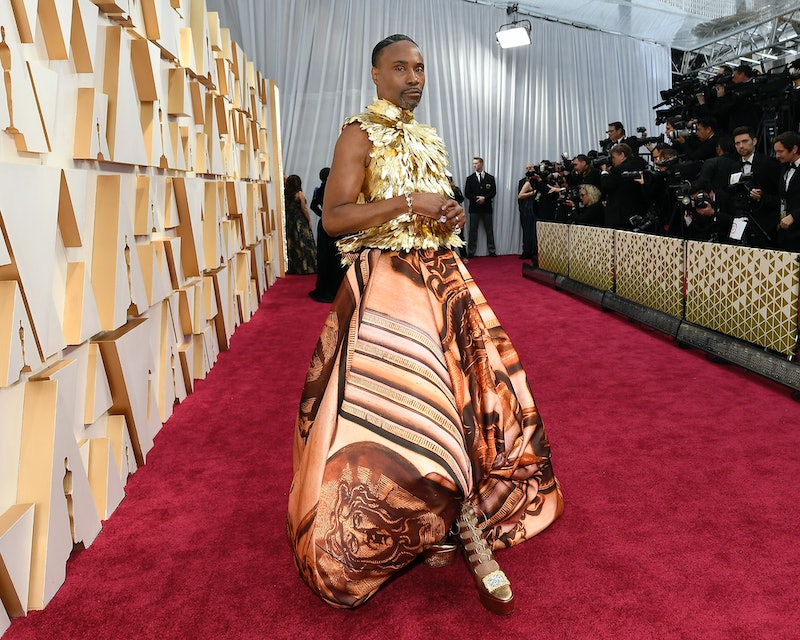 Attention: Billy Porter has arrived on the Oscars 2020 red carpet. In true form, he managed to outdo even himself. Being the boundary breaker he is, the Pose star opted for a stunning mixed texture look by British designer Giles Deacon that's got everybody talking.

Porter's ensemble featured a gold feathered top (and, naturally, the feathers are made out of 24K gold), a sweeping skirt inspired by one room in Kensington Palace, along with sky-high Jimmy Choos made from gold etched leather. Swarovski jewels completed the look.

"This look is all about royalty," Porter told The New York Times ahead of his red carpet appearance.

Sam Ratelle, Porter's stylist, was inspired to create the custom print for the voluminous skirt after touring Kensington Palace in London, according to The Times. Post-red carpet, Ratelle said Porter will remove the skirt "to reveal similarly printed Georgian-inspired pants for his preshow hosting duties."

Unsurprisingly, Porter has had quite the fashion-forward awards season. At the 2020 Grammys, he went the high-tech route, wearing a turquoise glitter unitard and a robotic chandelier hat with a bejeweled "shade" that opened and closed via a remote control.

And at this year's Golden Globes, he offered up a new take on his iconic tuxedo ballgown, designed by Christian Siriano, from the 2019 Oscars. At the Globes, it was an all-white ensemble topped off with a lengthy white feather train.

Hmmm, more feathers? We're sensing a trend that Porter just can't get enough of. Indeed, he seems to have one certifiable mantra when it comes to red carpet dressing: more is definitely more.

“What’s the red carpet if not theater?” Ratelle recently said in an interview with The Times.

That's a fair point, and Ratelle's philosophy as a stylist explains why Porter continues to deliver fashion brilliance. So long as these two work together, we can count on future unforgettable red carpet moments.