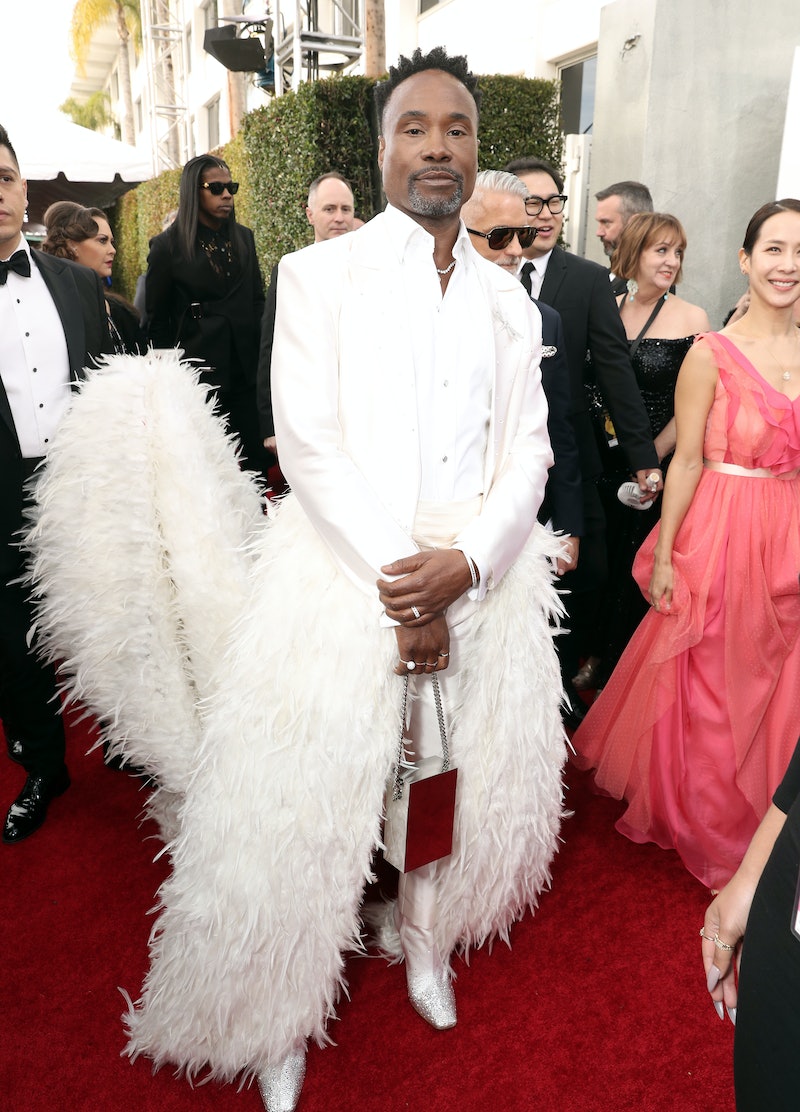 There's one face everyone will be waiting to see this awards season, and it's thanks in part to his incredible looks from 2019. And boy, did he not disappoint. Billy Porter's 2020 Golden Globes outfit proves his style only continues to get better and better. Even given that his Christian Siriano tuxedo gown from the 2019 Oscars was Google's top-searched red carpet look from last year, the star of FX's Pose showed how its done on a carpet.

Porter decided to wear a tuxedo again to the Globes, and, like last year, he did so with a twist. The actor chose a custom-created Alex Vinash number that took a whopping three months to create and included a next-level feathered jacket and train.

Although Porter's white trousers, button-down shirt, and cummerbund leaned toward a more subtle look, he added a unique twist to the piece of suiting. A white feather train is attached to the bottom of his jacket, and it's so much that it had to be carried while he entered the red carpet.

With the voluminous tuxedo jacket, Porter wore a pair of glittering, closed-toe Jimmy Choo shoes and jewelry from Tiffany. He added a mirrored handbag to finish off the look as he made his way into the show.

In an interview on E!, Porter admitted the design process began prior to his nomination and joked with host Ryan Seacrest about being thankful he was nominated. Like last year, the actor is nominated for Best Performance by an Actor in a Television Series for his portrayal of Pray Tell in Pose.

Although Porter's 2019 tuxedo gown may have been the showstopper of last year's award season, Porter seems to be well on his way to topping 2020's Google charts as well.

More like this
Camila Cabello Wore A Pearl Bra On The 2023 Grammys Red Carpet
By Alyssa Lapid
Lizzo Wore A Spicy Bustier Gown On The 2023 Grammys Red Carpet
By Alyssa Lapid
Taylor Swift’s Glitzy Grammys Look Is Giving Midnights
By Alyssa Lapid
This 'One Tree Hill' Wardrobe Error Is Going Viral On TikTok
By Brad Witter
Get Even More From Bustle — Sign Up For The Newsletter
From hair trends to relationship advice, our daily newsletter has everything you need to sound like a person who’s on TikTok, even if you aren’t.