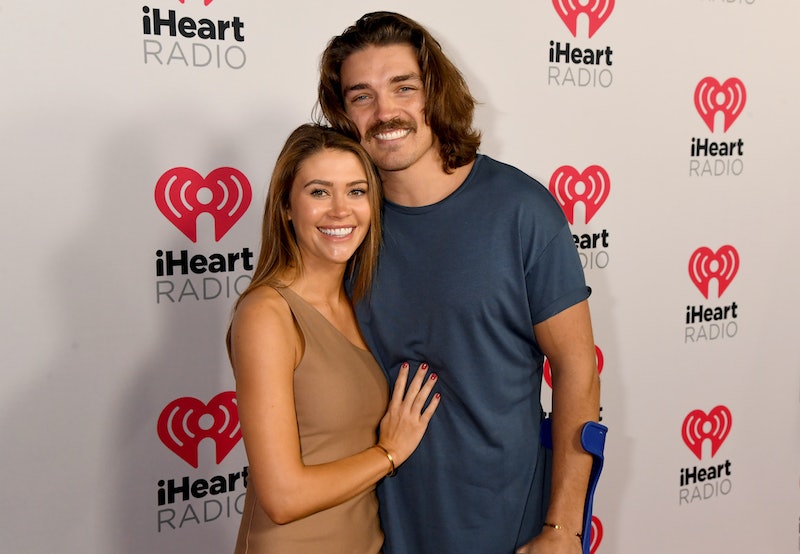 Don't worry Bachelor Nation, it turns out that you didn't miss out on Dean Unglert and Caelynn Miller-Keyes' secret wedding. While speaking with Chris Harrison on the June 22 episode of The Bachelor: The Greatest Seasons — Ever! Dean and Caelynn revealed they aren't actually married, and explained the real reason why they've decided to wear rings. Rumors that the couple — who met on the 2019 season of Bachelor in Paradise — secretly tied the knot first surfaced back in February, when Dean was spotted wearing a wedding band in an Instagram Story.

"In my opinion, I don't need the title of husband to show the world I'm committed to one person," Dean explained to Harrison, showing off the ring he's been wearing for "the last six or so months." And while it represents his commitment to Caelynn, the Bachelorette alum added that they haven't legally tied the knot. "So the fact that I'm wearing the ring is showing just that, that I'm committed to Caelynn and only Caelynn. And that's why I've worn it."

Dean continued, "It's not a traditional marriage or engagement ring... but it's our little way of telling the world or the people we're around that we're committed to each other." He also noted that Caelynn wears a "fun little ring" as well, adding, "I think it's one of those comforting things where you can wake up in the morning and see your partner wearing that ring and know, 'OK, yes, they know I'm committed to them and vice versa.'"

According to Caelynn, the decision to start wearing commitment rings began when Dean "started wearing a hair tie on his ring finger, just to fight women off," and it evolved into a symbol of their relationship. "It's just nice to know we're in this strong, committed relationship without having to get the government involved, as Dean likes to say," the former beauty queen added.

While they added that they might one day decide to get married — Dean told Harrison at one point that "we're unwavering, we're in this for the long haul" and that "there is no going back" — for now, Dean and Caelynn are happy with their relationship as it is. "I can't believe it's been a year since we landed in San Diego, started driving the van, and we've traveled the world," Caelynn revealed, adding that it's been "great" to explore the world alongside Dean. "We've climbed volcanos. We've hiked, climbed, rock climbed. We've done a lot. ...I did not expect what I got. Dean is an enigma, for sure."

This is far from the first time that Caelynn has talked about how much her life has changed since she decided to leave Paradise with Dean and hit the road in his van. "[Our relationship] has been so much fun because he brings out a very different side of me," she told E! News in October of 2019.

"Our relationship is different than any other ones that I have had. He challenges me and pushes me in different ways. He takes me skydiving and puts me on the back of a motorcycle," Caelynn continued, adding, "He brings out the adventure side of me but also challenges me intellectually as well."

They may not be married — or even engaged — but it seems like Dean and Caelynn have gotten their happy ending after all.