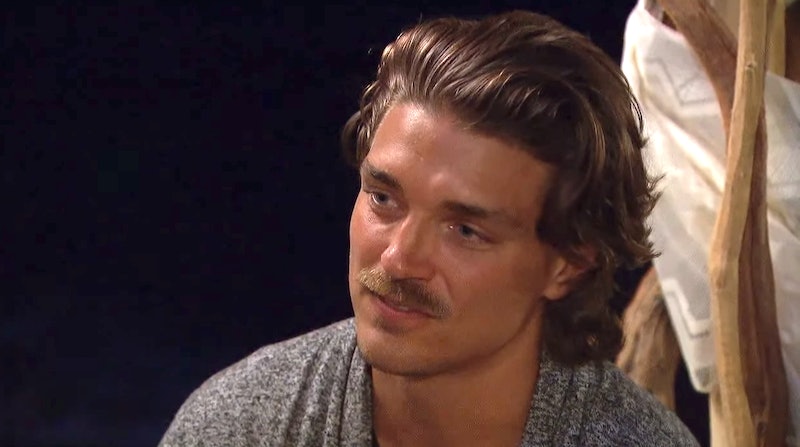 With his cardigans, mustache, and vagabond ways, Dean didn't necessarily seem like the most obvious fit for Bachelor in Paradise this season. Still, it was a shock when he broke up with Caelynn on her birthday and left Paradise in the forth week of Season 6. Yet, Deanie Babies' time in Mexico isn't over since the previews showed that Dean comes back to Bachelor in Paradise, and it looks like he's a man on a mission. Based on the previews and their connection, it definitely seems like Dean will be making his way — sans facial hair — back to Mexico to try to rectify ending things with Caelynn.

Caelynn has had a rollercoaster of a Bachelor in Paradise season so far with the Blake Stagecoach drama (on- and off-screen), a date with potential future Bachelor Mike, and then diving in headfirst with Dean. However, the Aug. 27 episode was particularly wild for the former Bachelor contestant, when Dean dumped her and then the very next day, she ended up kissing Connor at Chris and Krystal's wedding. And while it looks like she's making an effort to move on with Connor, Dean doesn't appear to be done with her just yet. As the preview for next week showed a clean-shaven Dean coming back to the beach saying, "I made a mistake."

Bachelor previews are often intentionally misleading. So there's a possibility that Dean doesn't return to Paradise to win back Caelynn. Yet, E! News reported in July that a source alleged that Dean and Caelynn are currently an item. And the two have only seemed to confirm those rumors since they've posted photos in similar spots and were recently spotted at a tattoo parlor together. So the most likely scenario is that a mustache-less Dean comes back because he regrets letting Caelynn go.

While Dean's move on the Aug. 27 episode was controversial, he was at least attempting to be less selfish than he was last time on Paradise. As he explained to Caelynn, he wasn't breaking up with her because he wasn't interested in her anymore. Instead, he was concerned that once they left Paradise, he wouldn't be able to give Caelynn the commitment she craved. "I know that I won't be able to get where you would need me to be by the end of this," Dean said. "I just think that you deserve someone better than me, to be perfectly honest."

On his podcast Help! I Suck at Dating with Jared Haibon and Vanessa Grimaldi, Dean discussed his Paradise actions ahead of the Aug. 27 episode. He said he doesn't agree with the mindset that The Bachelor franchise promotes and many contestants follow of ending up in a relationship "regardless of what happens." Dean said he believes that leads people to end up "pursuing something rather than pursuing someone." But based on the preview for Week 5, Dean's ready to refocus and pursue Caelynn regardless of his hesitation to enter a relationship.

Dean also hinted that his situation with Caelynn on Paradise is "like that Batman quote, 'It's always darkest just before the dawn.' But let me assure you, the dawn is coming and things are going to get a lot ... well, maybe ... get a lot brighter. We'll see." While he was trying to be coy, it sure seems that he and Caelynn have been enjoying happier times together, which heavily hints that he'll be fighting for her in Mexico.

Another clue that Caelynn and Dean will get back together is that Dean has had a good sense of humor about the situation on social media. He has retweeted mean tweets about his actions and acknowledged to Nick Viall how messed up it was to end things with Caelynn on her birthday. That could just be his patented self-deprecating behavior flaring up. But hopefully his ability to laugh at what happened on Paradise means that he's laughing about it with Caelynn by his side.