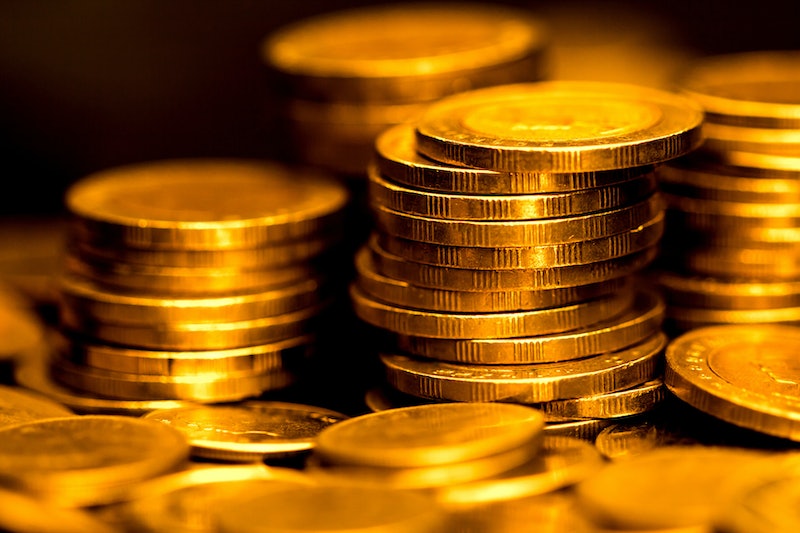 Now this is a cause for celebration: The United States Mint and Treasury announced Thursday that the American Liberty 225th Anniversary Gold Coin will portray Lady Liberty as an African-American woman. This will be the first time that we see black Lady Liberty on a U.S. coin, ever.

Update: Michael White, a spokesperson for U.S. Mint, tells Bustle that the new one-ounce coin is made of 24-karat gold, and that it will go on sale on April 6 according to the value of gold at the time. Silver coins with the same designs will be sold as well for $40-$50.

"When the founding fathers originally started the country, most coins had the pictures of monarchs on them, kings or queens, but they put Liberty on the coin," White says to Bustle. "This is just the modern reinterpretation of the traditional Liberty that's been on coins for years. And Liberty's values apply to all Americans."

Earlier: The gold coin, to be officially be released on April 6, is the first in a series of new coins that will come out every two years, each one featuring Lady Liberty of a difference race "to reflect the cultural and ethnic diversity of the United States," according to a press release from the U.S. Mint. Future racial ethnicities that will be represented on the gold coins include Asian-American, Hispanic American, and Indian-American.

Created in 1792, the U.S. Mint is an agency within the Department of Treasury that is essentially responsible for manufacturing all coins of the United States currency and circulating those coins within our economy. In addition to commemorative coins like the American Liberty Gold Coins, the U.S. Mint also releases Congressional Gold Medals as well as bars of silver and gold (also known as bullion). So just in case you've ever wondered where our money comes from, you can thank the U.S. Mint.

Each American Liberty 225th Anniversary Gold Coin is worth $100 on face value. Based on pictures that have been distributed, black Lady Liberty will be featured on the heads side of the coin, with the word "Liberty" printed across the top and the familiar phrase "In God We Trust" on the bottom, plus the dates 1792 — when the U.S. Mint was created — and 2017.

Flip the coin over on to view the tails side and you'll find an eagle spreading its wings and looking into the distance, meant to embody opportunity and determination, according to the U.S. Mint. At the top says "United States of America" along with our nation's official motto "E Pluribus Unum," which means "out of many, one" (this is one of those rare times that I'm glad I took Latin in high school).

It's a classic design that's been featured on most American coins, including a similar version on the 25-cent quarter. Every American Liberty 225th Anniversary Gold Coin will be presented in a black wooden case, along with a anniversary booklet and Certificate of Authenticity, so that whoever has the coin will know it's an original.

Since the American Liberty 225th Anniversary Gold Coin is a commemorative coin, it won't be circulated as regular currency for people to use in the U.S. economy like our regular quarters and dimes. Instead, 100,000 coins will be up for sale starting on the day of its release (again, that's April 6).

It's not often that women get a seat of representation in U.S. currency. In the past, the faces of female social activists like Susan B. Anthony, Eunice Kennedy Shriver, and Helen Keller have occasionally been featured on coins. Then, last spring, the U.S. Treasury announced that American abolitionist Harriet Tubman will be replacing Andrew Jackson on the $20 bill by 2030 — one of the biggest measures to increase representation of women and people of color on our currency.

Considering today's contentious political climate, in which women's rights and racial equality are still issues that we have to fight for in order for any productive conversation to happen at all, it makes me hopeful to know that our government is still making real change (pun totally intended). Ideally I'd like to see more moves to diversify the faces on our everyday currency, not just commemorative coins meant to honor our country's history and people once in a blue moon.

Still, progress takes time and this is a good first step. Hopefully, adding women like Harriet Tubman on our paper currency and featuring Lady Liberty as different people of color will act as a springboard for making real progress and promoting the fundamental rights that our nation was founded on: "life, liberty, and the pursuit of happiness."