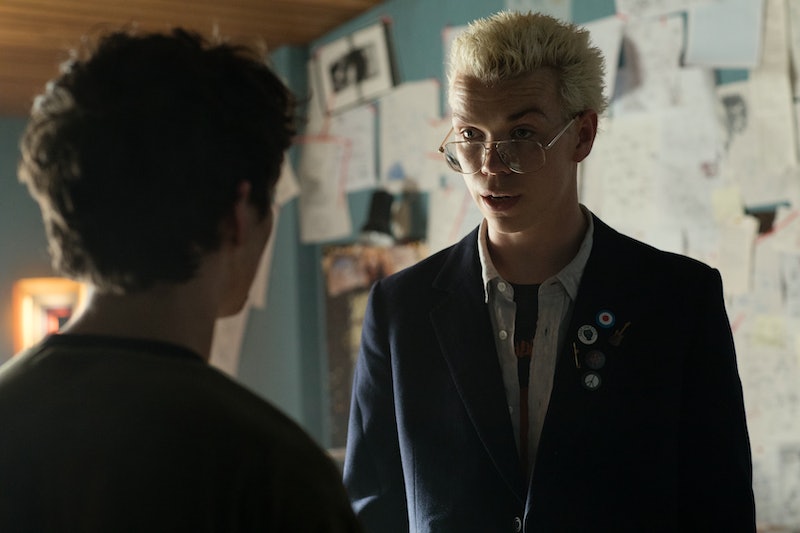 Online bullying has led to another actor leaving social media — at least temporarily. Black Mirror: Bandersnatch star Will Poulter has left Twitter in order to focus on his mental health. In the interactive film, Poulter plays Colin, a superstar video game programmer who seems to be aware that the choose your own adventure story is operating in several timelines at once. The 25-year-old actor has received praise for his role from fans and critics alike since the film's Dec. 28 release on Netflix. However, it seems that his performance has attracted some undeserved negative attention, as well, which has in part led to his departure from the social media platform.

On Wednesday, Jan. 2, Poulter shared a note on Twitter explaining his reasons for leaving the site for now. "In light of my recent experiences I am choosing to take a step back, of sorts, from Twitter," the actor wrote. "Before I do, I'd like to say a heartfelt thank you to everybody who has watched Bandersnatch and for their responses (whatever they may be) to the material we created. I accept all criticisms and it's been a delight to learn that so many of you enjoyed what many people worked very hard to produce."

Bandersnatch led to Poulter gaining new fans who praised his work in the film. Unfortunately, some viewers chose to lob harsh critiques at the actor's appearance on Twitter. As reported by British news channel Sky, some Twitter users have called the 25-year-old "ugly" and made other disparaging comments about his looks.

In true Netflix fashion, Bandersnatch dropped on the site with little fanfare, but quickly became a trending topic on Twitter as fans discovered the film. Poulter is a seasoned actor, having starred in films like Son of Rambow, We're the Millers, and Detroit. Still, the sheer amount of attention that the movie received, especially the misplaced negativity directed at the stars, had to be overwhelming. It's disappointing to see yet another young actor driven off the platform, but it's important for Poulter to put his personal well-being first.

Poulter's message continued, "As we all know there is a balance to be struck in our engagements with social media. There are positives to enjoy and inevitable negatives that are best avoided. It's a balance I have struggled with for a while now and in the interest of my mental health I feel the time has come to change my relationship with social media."

Thankfully, the actor who is also an advocate for a number of worthy causes, including anti-bullying campaigns, will continue to use Twitter to use the platform to promote the charities and organizations that he's associated with including the youth charity Leap Confronting Conflict and Anti-Bullying Pro.

"I don't want to appear unappreciative of all the amazing support I have received online for which I am genuinely so grateful, nor do I want my disengagement with social media to be at the expense of any of the organizations I am lucky to work with. So I will still be posting occasionally for and with @AntiBullyingPro @leap_cc @MayMeasure and @bptcompany among others," Poulter wrote.

He added: "I am privileged to have this platform. I hope that this shift to reduce my personal expression and increase the focus on issues that matter will result in a better outcome for everyone. This is not the end. Consider it an alternative path."

Poulter's decision to leave the platform to focus on his mental health has been met with supportive messages from his fans, as well as from his Detroit co-star, John Boyega. "Best thing you can do mate," Boyega responded to the actor's tweet. "Well done."

The Bandersnatch actor is yet another celebrity who has left social media in recent months due to negativity and bullying. Boyega's Star Wars co-star Kelly Marie Tran left social media due to the racism and bullying she received from some members of the movies' fandom, while Stranger Things star Millie Bobby Brown left Twitter, aside from her anti-bullying account, after becoming the subject of an offensive meme. More and more often the line between fiction and the very real celebrities making the movies and shows that people love seems to be becoming blurred online.

Poulter absolutely made the best decision for himself, but it's sad that he, and so many of his peers, are being driven offline due to the negativity of online culture.