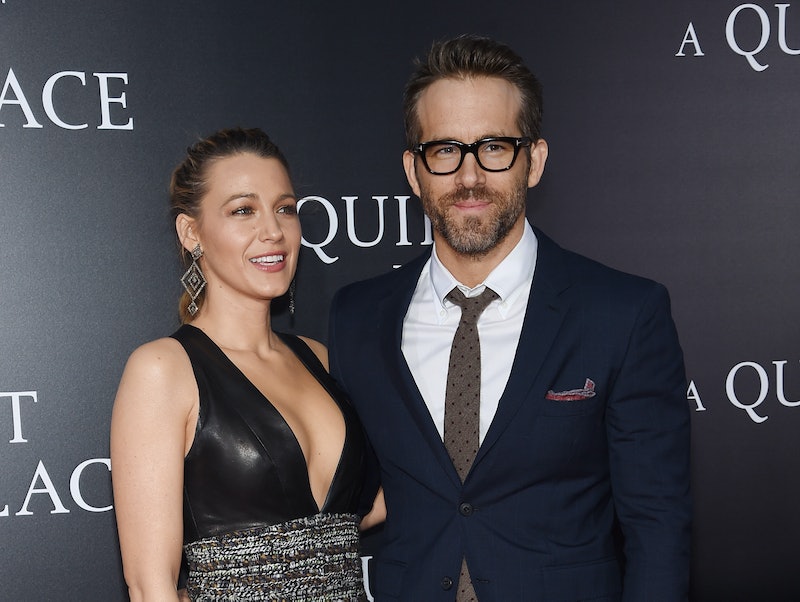 When it comes to giving gifts, this Gossip Girl star is clearly the queen. Blake Lively gave Ryan Reynolds a gift filled with so many personal touches that he shared on Instagram that it's officially "the greatest gift" that his wife has ever given him. The A Simple Favor actor commissioned a painting from artist Danny Galieote for her husband that's filled with symbols from his childhood. From a nod to his first job as a paperboy to a recreation of the house he grew up in, the painting tells the story of a young Reynolds so authentically that the Deadpool actor appears to be in awe of his wife's gift-giving skills.

Reynolds' Instagram post includes a photo of him standing by the painting, along with closeup shots of a few of his favorite Easter eggs. He captioned the picture:

"My first job was delivering newspapers for the Vancouver Sun. The house in the painting is my childhood home. My brothers and I spent years trying to kill each other on that lawn. There are a lot of Easter eggs in the painting, including my idol, John Candy on the front page of the newspaper. The house no longer stands but it’s a living, breathing thing in my head. This piece of art is the greatest present my wife has ever given me. It was created by @dannygalieote. If there’s ever a fire, I’m grabbing this first. I’ll come back for Blake."

Perhaps the sweetest part of the gesture is that this appears to be a "just because" gift. It's not Reynolds' birthday or their anniversary, so clearly Lively is just a super thoughtful gift giver. (Her Sisterhood of the Traveling Pants co-star, America Ferrera, agreed. She commented on the post, "That's the sweetest. She's the best gift giver.")

Reynolds and Lively are known for trolling each other online. They've proven time and time again that they're a celebrity couple with a sense of a humor — and the Deadpool star couldn't resist cracking a joke at the end of his most recent post either, writing that he would save the painting in a fire and come back for his wife — but Lively's gift is a reminder that these two clearly know each other incredibly well. The amount of thought that must have went into all of the painting's tiny details shows that this gift was super thought out.

Lively deserves extra kudos, because not only did she plan this super cool and thoughtful surprise for her husband, she's also expecting the couple's third child soon. Lively and Reynolds revealed they're expecting again during the May 2 premiere of Detective Pikachu. Their new baby will join their daughters: James, 4, and Inez, 2.

Coming up with a gift that special while also preparing for the arrival of their third child is next level thoughtfulness. The ball is officially in Reynolds' court. These two love out-trolling each other on social media, but does their competitive streak also extend to gift-giving? If it does, here's hoping that Reynolds is up for a challenge, because Lively's amazing present is going to be hard to top.