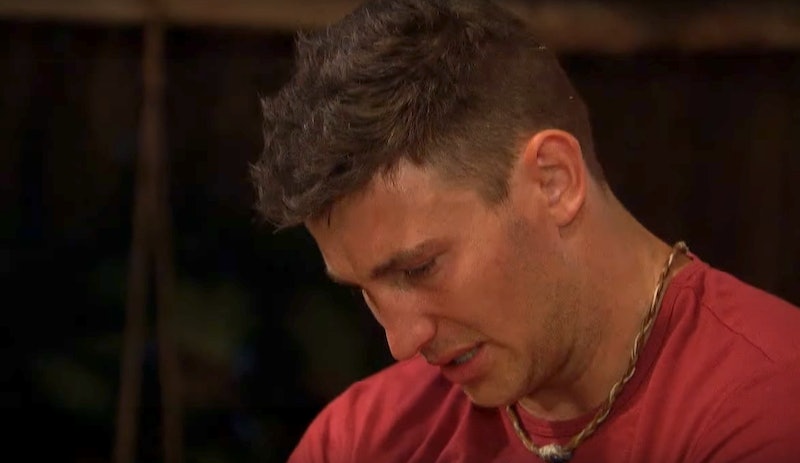 Usually on Bachelor in Paradise, there's enough drama that happens onscreen that it's not wholly necessary to keep up with the contestants offscreen. But on Tuesday, Aug. 6, Blake Horstmann took to social media to try and share his side of what happened between him and Caelynn Miller-Keyes while the show aired. Bachelor alums reacted to Blake's Instagram post about Caelynn with a surprisingly large amount of support for him.

Bachelor in Paradise is only two episodes in, but Blake's relationships before of the show are already causing drama. As shared on the show, Kristina Schulman and Blake were very casually seeing each other and had spent the night together at Stagecoach. The next night, Blake and Caelynn hooked up. Blake told Kristina about him and Caelynn ahead of Paradise, but Caelynn claimed that Blake had asked her to keep their relationship a secret and was upset that he had called their hookup a mistake. And Tuesday's episode showed Caelynn confronting Blake about the circumstances surrounding their one-night hookup during the Stagecoach music festival back in April.

As all of this was unfolding on air, Blake decided to take to Instagram to defend his "name and character." In a lengthy post, he wrote that he was "under the impression it was 'just sex'" with Caelynn, and he also added how he has struggled this past year since being dumped by Becca on her season of The Bachelorette.

In addition to his message, Blake chose to share the personal texts between him and Caelynn the night they hooked up in his Instagram Story. He defended the choice in his post by stating he thought the Bachelor in Paradise edit was unfair to him and the texts showed why he thought this moment with Caelynn was only casual sex. However, as he stated in an update to his Story, he has since deleted the texts and claimed he never wanted Caelynn to be "attacked." Bustle has reached out to Blake for comment but did not receive a response ahead of publication.

The choice to publicly share the personal texts was controversial, to say the least. But the responses from Bachelor alums to Blake's post overall were mostly supportive — even if not everyone agreed with his past or current actions. For instance, Jason Tartick, who also appeared on Becca's season of The Bachelorette, called Blake a "loyal friend" in the comments and stated that he should "learn invaluable life lessons" from this. Jason's girlfriend — former Bachelorette Kaitlyn Bristowe — also weighed in by simply commenting, "Thank you for being vulnerable and honest."

Kevin Wendt, who found love with Astrid Loch on last season's Bachelor in Paradise, noted how he thought Blake posting the texts between him and Caelynn was a bad idea. "I know I told you last week posting these might not be the best idea," he wrote, "But as a friend I just want YOU to be happy and I know your anxiety was about to erupt. So I get it. and I'll support you regardless." Astrid echoed her boyfriend's sentiment of support, but also added, "If nothing else I hope you learned from this and it helps you grow into the man I know you are."

Another member of Bachelor Nation who is coupled up, Adam Gottschalk, commiserated with Blake over the fact that the editing on the reality franchise can sometimes misconstrue things. Jasmine Goode, of Nick's Bachelor season, agreed.

Blake received some kind words from fellow male contestants Ben Zorn, Chase McNary, and David Ravitz as well. Yet, Vinny Ventiera was less positive and wrote what many Bachelor fans were thinking with his succinct comment of "Ohhhhhhhh man."

But perhaps the most unexpected response came from someone directly involved in the situation — Kristina. "Speak your truth, no one can that away from you," she wrote in the comments.

Blake might feel attacked right now, but the responses from Bachelor alums show that his friends won't abandon him during this difficult time.