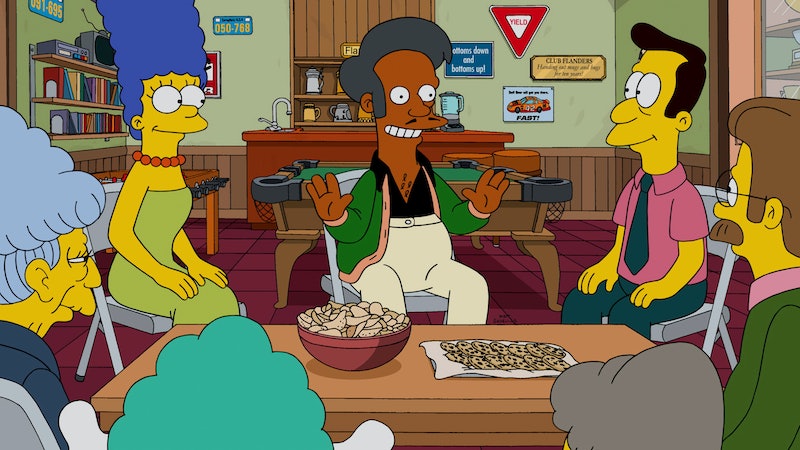 When I saw how The Simpsons responded to the Apu controversy (the controversy being concerns about how that character played into negative stereotypes associated with brown people), I can't say I was particularly shocked. To be clear, the Apu controversy is completely worth a discussion, but The Simpsons' unwillingness to actually engage in one is upsetting, especially because such a response is all too familiar.

In the episode in question, which aired on Sunday, April 8, Marge attempts to rewrite a story from her childhood to make it less problematic so that she can read it to Lisa. She turns what's described as a racist children's book into a tale that's supposed to be more palatable for 2018, so that now "it’s as inoffensive as a Sunday in Cincinnati." But her once-beloved book is now bland and lacking any nuance, and Lisa finds it pointless.

This is supposed to be a metaphor for the long-running show — if you were to remove the offensive parts, it's no longer entertaining. And if the parallels between Marge's book and the show weren't blatant enough, The Simpsons really hits the point home with this line from Lisa:

"Something that started decades ago and was applauded and inoffensive is now politically incorrect... What can you do?".

Well, I can think of a few things that could be done. The first being that we should stop pretending that creating thoughtfully constructed minority characters is impossible. Because it's not. Netflix did it with the ensemble cast of Orange Is The New Black. Shows like This Is Us, Silicon Valley, and The Good Place all managed to evade tokenizing their characters of color. It's very possible.

One of the issues with the character of Apu Nahasapeemapetilon, as pointed out in Hari Kondabolu's documentary The Problem With Apu, is that for a long time, Apu was one of the only South Asian figures on American TV. And even then, Apu was a cartoon character voiced by a white man (Hank Azaria) putting on an exaggerated Indian accent — not exactly a worthy representation of the 3.19 million Indian Americans in the USA in 2011.

His character fully committed to the simplest stereotypes associated with South Asians: Apu had an arranged marriage, he has a degree in computer science, and he has a thick accent in which he perpetually rolls his "R"s. But sure, it was all for a good joke. And for a lot of people, just the inclusion of a brown person was a cause for some celebration. When you don't often see people who look like you represented in media, the rare moments when you do hold great significance. Even if those characters are problematic, it's nice to know that at least someone cared enough to include them.

As Kondabolu says in the documentary, audiences have a complicated relationship with the character. Not everyone who identifies as South-Asian feels the same about Apu. Some find the stereotyping benign and the character funny; others feel differently. There is going to be a myriad of responses from the community about this character because the South-Asian community — like any community — is diverse unto itself. Ultimately, we can't change the way writers on The Simpsons chose to portray an Indian man for the last 30 years.

But what we can do is accept that times have changed in the last three decades — and now so should this character moving forward. Maybe Apu was revolutionary in 1989 — the character was certainly noteworthy enough for Azaria to win an Emmy for Best Voice-Over Performance in 1998 — and a POC on screen was a rarity then. But that's not the case now. Pagers were revolutionary technology when The Simpsons first aired, but they aren't anymore. That's how the passage of time works — seemingly "genius" stuff becomes outdated and unwanted, and the show should recognize that it needs to adapt to the times instead of double down defending itself.

The essence of the argument that The Simpsons tried to make in their April 8 episode is that political correctness has been taken "too far" and requires too much effort. Unfortunately, this isn't an original thought: It's brought up pretty much every time someone who isn't straight, white, and a man makes any kind of argument for against diversity. It stems from a baseless notion that if you were to produce a piece of art that wasn't blatantly offensive or dehumanizing to one group of people, it wouldn't be entertaining or interesting. The Simpsons has chosen (for now) to ignore criticisms from its audience, and to forgo putting just a bit of extra thought into developing Apu as a nuanced character of color. (When Bustle reached out about the backlash, Fox declined to comment.)

I wasn't surprised by the response from The Simpsons, because this is the same line of thinking that Marc Jacobs used to defend styling white models with dreadlocks in 2016 (he has since apologized). It's why Ghost In The Shell was made, despite criticisms of whitewashing all the main characters (the movie severely underperformed in the box office, losing about $60 million). And it's what The Simpsons is using as a defense now: If they choose to evolve the character by, say, hiring an Indian guy to voice the part or consulting South Asians about the character, the show wouldn't be funny or meaningful anymore. Essentially, feedback from minorities isn't even worth exploring if it means cutting out stereotyping.

That's ridiculous and I'm not buying it. In the past decades, we've seen huge strides made in the name of diversity. There have been record-breaking female-led superhero movies, TV shows about queer characters, and award-winning stories led by people of all races. We've seen directors and writers from minority groups make waves in the industry and produce work that resonated with large swaths of the population. There are plenty of examples from just this year that prove that art can be both critically acclaimed and financially successful without making sloppy generalizations about groups that are traditionally underrepresented in entertainment.

I believe it's possible for The Simpsons to hold cultural relevancy with less bigotry (intentional or otherwise) in 2018. In fact, I would say that's the only way it can really stay relevant — because if the backbone of The Simpsons actually lies in the grossly caricatured portrayal of minorities, then do we really need it at all?

Good content doesn't have to offend people. It doesn't have to rely on cheap jokes at the expense of women, LGBTQA+ folk, and/or people of color. Content people want to watch can be inclusive and be funny. It can be nuanced and still entertaining. These aren't outrageous demands, and these considerations won't stifle creativity. Creators who care about creating meaningful content will rise to the occasion and do just that.

More like this
The 'It's A Sin' Creator Revealed A Massive Detail That Didn't Make The Final Cut
By El Hunt
'Derry Girls’ Dylan Llewellyn Will Star In C4’s New Queer Comedy
By Rachel Mantock
'Gentleman Jack’s Cast & Crew Are Keen On Season 3, Too
By Frances Stewart
'Heartstopper’s Joe Locke Has A Sweet Message For Queer Fans
By Sam Ramsden
Get Even More From Bustle — Sign Up For The Newsletter