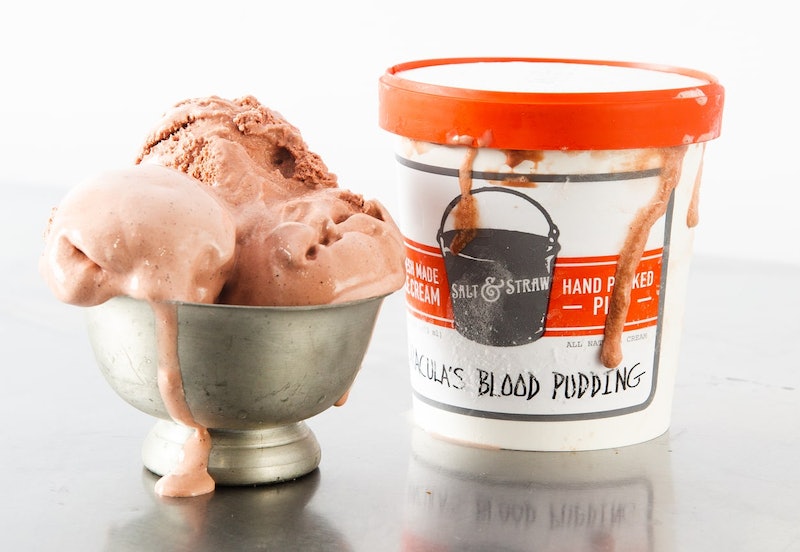 Everything gets a spooky makeover in October: Your home. Your pets. Even your dessert choices. And hey, wouldn’t you know it? Artisan ice cream makers and purveyors Salt & Straw’s October ice cream flavors for 2018 are exactly what your newly spookified freezer and taste buds have been waiting for. According to Foodbeast, the lineup this year includes Dracula’s Blood Pudding and Creepy Crawly Critters — which, yes, contain actual blood and actual bugs. What a time to be alive, am I right?

Cousin duo Kim and Tyler Malek started Salt & Straw in 2011; Kim runs the business side of things, while Tyler acts as head ice cream maker. In the years since its debut, the company has steadily expanded along the West Coast, with around 15 locations now in operation across Portland, Ore.; Seattle, Wash.; and San Francisco, Los Angeles, and San Diego, Calif. They’re known for their unique flavors, like Strawberry Honey Balsamic with Black Pepper, Avocado & Oaxacan Chocolate Fudge, and Black Olive Brittle & Goat Cheese, as well as for their seasonal offerings, which might include anything from Peach & Vanilla Bean Crumble to Bone Marrow & Smoked Cherry. (Both of those options were part of the Late Summer Harvest menu, by the way.)

And for October, as part of what they usually call their Spooktacular Series of flavors, they’ve got two extra spooky varieties on tap: Dracula’s Blood Pudding and Creepy Crawly Critters. According to Foodbeast, Dracula’s Blood Pudding mixes spiced ice cream with pig’s blood sourced from Portland-based wholesale butcher NICKY USA, while Creepy Crawly Critters starts with a base of matcha ice cream into which is added chocolate-covered crickets and coconut toffee-brittle mealworms from Oakland's famed bug snack maker, Don Bugito.

Lest either of those desserts sound way too weird, though, neither of them is actually as odd as you might think. Dracula’s Blood Pudding, for instance, takes its inspiration from a traditional Italian dessert that was once an essential part of the pre-Lent celebration of Carnevale. Called sanguinaccio dolce, its name tells you exactly what it is: Sweet blood pudding. It’s made from a mixture of ingredients including chocolate, milk, sugar, and pig’s blood, all of which combine together to make a decadent, creamy treat. Depending on the region you’re in it, it might also include things like pine nuts, cinnamon, or candied orange peel. Interestingly, sanguinaccio dolce has actually become quite hard to come by in Italy; in 1992, many regions of the country banned the sale of animal blood due to its short shelf life, which means that if you want to make the dessert over there, you have to slaughter your own livestock fresh to do it.

Creepy Crawly Critters, too, isn’t as strange as it might at first appear. Insects, it turns out, are an excellent source of protein. It’s true that research has found some to be more nutritious than others, but in a world that’s facing a global protein shortage looming before us, it’s clear that we shouldn’t discount insects as a way to fight under-nutrition. What’s more, people do seem to be into it; the fact that companies and brands like Don Bugito even exist I proof that there’s demand for bug-based snacks. And, I mean, let’s be honest: When you smother something crunchy with chocolate, can you really tell what’s underneath? Personally, I can’t; that’s why the only popcorn I’ll eat is the stuff that’s covered in chocolate: It doesn’t taste like popcorn anymore. The same, I would imagine, is true of mealworms and crickets, so, I mean, why not toss some chocolate-covered bugs into ice cream? May as well, right?

Salt & Straw habitually offers around five spookily-themed flavors in October, each drawn from a larger selection of Spooktacular Series offerings that cycle in and out each year. Both Dracula’s Blood Pudding and Creepy Crawly Critters have been offered in previous years; according to The Los Angeles Beat, the blood-infused flavor hit the menu in 2014 (and, as other sources can attest, reappeared in 2016 and 2017), while both Salt & Straw’s own website and Facebook page note that Creepy Crawly Critters popped up on the menu in 2015 and 2017.

Other flavors that have reared their sweet and monstrous heads on Salt & Straw's menu over the course of the past few Octobers include Essence of Ghost, described by The LA Beat as “a mysterious mixture of scotch and vanilla sherbet with wisps of black cocoa swirled in”; the Great Candycopia, which includes “big chunks of Snickers, Whoppers, and Peanut Butter Cups,” according to NBC Los Angeles; and Freckle and Hyde, which BTR Today noted was a layered concoction of “sour cranberry sorbet and bitter melon sherbet.”

According to Salt & Straw’s Twitter feed, 2018’s October flavors will launch on the fifth of the month (that's this Friday); we don’t know what the full lineup will be yet, but we do know that when they go live, they’ll be available through the end of the month. Foodbeast reports that they’ll be available both in Salt & Straw’s scoop shops, as well as by the pint — which means that, even if you don’t live in or near Portland, Seattle, San Francisco, Los Angeles, or San Diego, you’ll be able to order them online and have them delivered right to your door.

Head on over to Salt & Straw’s website starting on Oct. 5 for more. Happy almost-Halloween!