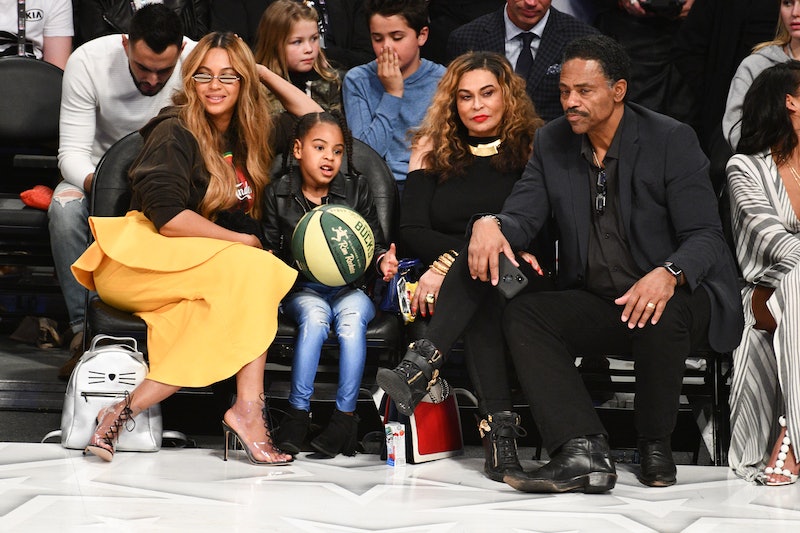 Being born to talented parents like Beyoncé and JAY-Z, it was pretty much a given that Blue Ivy, Rumi, and Sir would have plenty of star potential. And now, it looks like some of that potential is already starting to come out in the oldest Carter kid. According to what grandma Tina Knowles Lawson told Us Weekly, Blue Ivy is already a star. But honestly, is anyone surprised?

While talking to the magazine, Lawson revealed that Blue Ivy has been a true performer "since birth," although she hasn't made a decision about what direction she'd like to take her talent, which makes sense, since she's only six years old. However, that doesn't mean her grandma is concerned in the slightest.

“But whatever she wants to do, she will definitely be able to do it because she’s good at a lot of things,” Lawson said.

Of course, most grandmothers are going to brag about their grandchildren at least a little bit, but it doesn't seem like Lawson is saying anything that fans of Beyoncé and her family didn't know already. From everything we've seen of Blue Ivy so far — whether it's on social media or in her parents' music videos — she does seem to have that "it" factor.

Unfortunately, that's all that Lawson shared on the topic — at least, out of what Us Weekly has released ahead of the issue where she's featured — but fans already have all the proof they need to know that Blue Ivy deserves all the spotlight she receives. If she ultimately does go into entertainment, it's obviously hard to know if she'll decide to pursue music, like her mom and dad, or acting, but one thing we already know: This girl can rap.

In fact, in January, JAY-Z dropped an animated video called "Blue's Freestyle," where a character meant to be Blue interrupted her own ballet performance to rap, and of course, the audience was astonished by her skill, including Rumi and Sir in the audience, who were cheering her on despite being infants.

And it's not just when she's actually performing that Blue steals the show — no, it happens almost every time she makes a public appearance with her parents. When she attended an art auction with Beyoncé and JAY-Z, she bid $19,000 on a piece and kept going until her dad shut her down, and when they all went to the Grammys as a family, people couldn't stop talking about how Blue told her parents to stop clapping while Camila Cabello was making a speech. This girl knows what it takes to get everyone's attention for sure.

Whether Blue Ivy enters show business or not, she's lucky to have a grandma who can't stop gushing about her — and her parents are pretty cool, too. It will be so much fun to see her continue to grow and find out who she'll be as an adult, especially once Beyoncé and JAY-Z share more of their two youngest kids. Maybe there's a Carter kids project in the future?