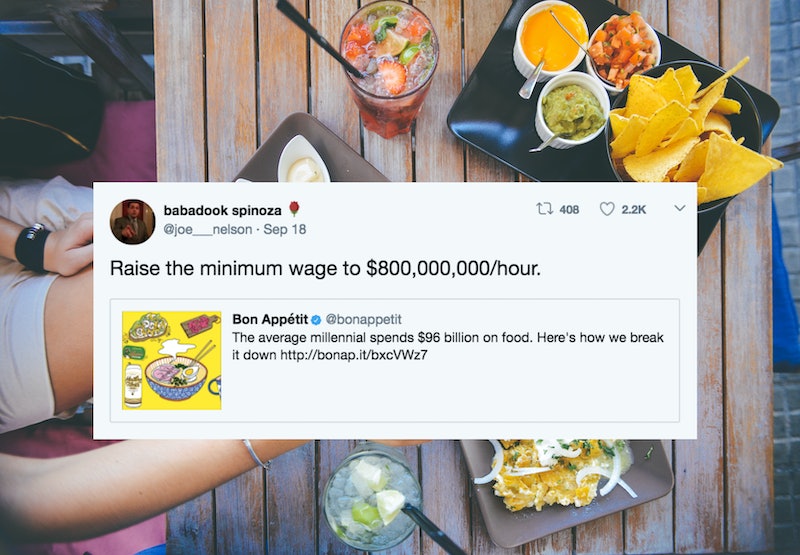 All the flack millennials get for overspending ourselves into financial ruins is officially unwarranted, as we're apparently rich. In fact, we're so rich that the average millennial spends $96 billion a year on food alone. The average millennial. As in... the average person. One person. So get off our cases about eating pricey avocado toast and wanting to travel more. This number, of course, is laughably inaccurate and the result of a typo Bon Appetit will never live down, after mistakenly tweeting that each millennial drops billions of dollars on food. Twitter had things to say about this; but overall, it was in good fun.

Did Bon Appetit mean that millennials as a whole population spend $96 billion on food? Probably. But no one really cared that much after the epic typographical error. In a 2016 article on their website, they shared an illustration titled, "Anatomy of a Food-Obsessed Millennial." The illustration portrays an incredibly stereotypical, overly critical evaluation of the typical millennial's supposedly poor spending habits, highlighting our expensive taste in things, despite the fact that we don't even own the necessities, like a vacuum cleaner. While it's not clear whether it was satirical jab at the stupid things people say about millennials, or actual millennial bashing, there is meaning in its claims — because some people really think this way about us.

But wait. It gets better: they recently tweeted the article with one huge mistake in the caption, prompting every millennial on Twitter to scratch their heads.

The average millennial is simultaneously broke and spending billions on expensive food? How do we do it?

Of course, people had thoughts.

Bon Appetit isn't the first to address millennials and all the wrongdoing we're accused of. It was Australian millionaire Tim Gurner who claimed that our spending habits, desire to travel, and obsession with buying expensive avocados are the reason we can't afford homes. (And all this time I thought it was because homes are expensive.) We've been blamed for killing mom and pop stores by shopping online, destroying the golf industry and Home Depot (don't ask how because I don't know), and ruining sales for restaurant chains — ironic, considering the $96 billion we're each spending on food every year.

The millennial blame game is nothing new, and we're certainly tired of hearing it. Labeled as self-entitled, lazy, spoiled, selfish, and narrow-minded, millennials have become the scapegoats for any and all wrongdoing — real or imagined. Bon Appetit — with their illustration that was likely meant to make readers laugh — perfectly summed up the overgeneralization we've assigned to an entire generation, framing us as careless and irresponsible. And friends? There's nothing funny about that. Talk to the millions of millennials going to school while holding down a job, still struggling to make ends meet, walking around exhausted 24/7. That person definitely has a problem with this overgeneralization and stereotype that continues to be the millennial's shadow.

It's a tough battle to fight — pointing out the gross fallacies being held against you when you've already been accused of being an overly sensitive "snowflake" who complains too much — two more things millennials are labeled with. The other option we have is to tough it out as people continue to pigeonhole millennials, which doesn't do much to solve the problem at hand: that an entire generation of people has been so heavily stereotyped, and in such a negative light, that even millennials don't want to be associated with millennials.

Bon Appetit's Twitter flub was worthy of a good giggle; and since they've left the tweet up, along with a quippy explanation, it's safe to say that they're able to go with the flow and laugh with the rest of us.

As for the underlying issue regarding how horrible millennials are? That's still nothing to laugh about.