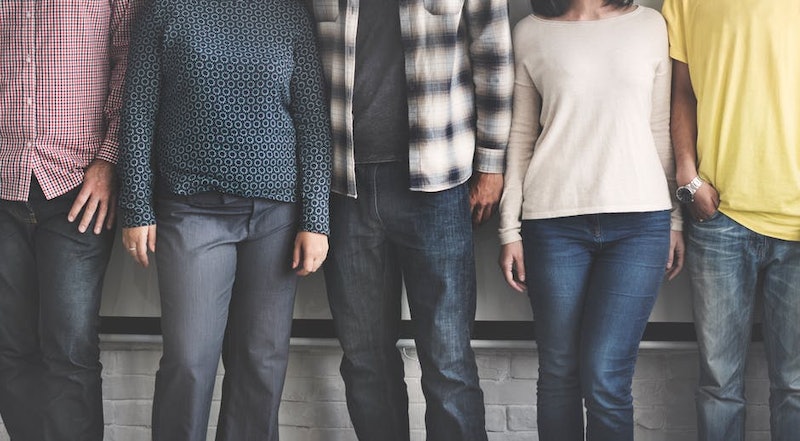 Is it just me, or does the word "millennial" now have a massive stigma attached to it? When we're not getting blamed for wrecking our own economic future with avocado toast purchases, we're getting blamed for the decline in chain restaurants, paper napkins, golf, and — drumroll please, America — even strip clubs. It seems, though, that much like the Pacific Northwest has joked about seceding from America and realizing their long discussed "Cascadia" dreams, older millennials are trying to jump off our selfie-taking, Unicorn Frapp-chugging ship. They're not older millennials anymore; according to one professor, they are better off calling themselves "Xennials."

My official response to this is, "Sure, Jan." According to Dan Woodman, TR Ashworth associate professor of sociology at the University of Melbourne, this term, a cross between Generation X and the millennials that they are distancing themselves from, extends to the "microgeneration" of people born between 1977 to 1983.

And yes, OK, the experience of someone born in 1977 is decidedly different from, say, a person born in 1991. Woodman makes a solid point as a "Xennial" himself, saying to Mammamia, "Around technology they do have a particular experience — we hit this social media and IT digital technology boom in our 20s. ... We learned to consume media and came of age before there was Facebook and Twitter and Snapchat and all these things where you still watch the evening news or read the newspaper."

But Xennials, regardless of our difference in experiences, I beg of you not to defect from our cohort — because yes, some of you, according to the boundaries of what a "millennial" is, certainly are a part of it whether you identify that way or not (millennials are pegged at starting any year between 1978 and 1983). You helped us destroy paper bank statements, cable television, and the sanctity of plain coffee. You were the heel of the mighty fist that brought down bar soap, the traditional nine-to-five work day, and interpersonal interactions that didn't start on a screen. For Christ's sake, you were the pioneers who made AIM screen names ridden with "~*~*~*~" a THING. You were the older siblings, babysitters, and camp counselors we wanted so badly to be just like. WE LEARNED FROM WATCHING YOU, XENNIALS! WE LEARNED FROM WATCHING YOU!!!!!!!!!!!!!!!

Admittedly, though, it's not too surprising that "older millennials" are trying to distance themselves from us — especially because, as noted by some hilarious compilations of headlines and general internet culture, there are very few things millennials aren't being blamed for. Other generations (specifically Baby Boomers) perceive us "entitled" and "lazy," and while we have plenty of defenses against those accusations, there's no doubt that the generational term now has such a stigma that even regular, not-on-the-border millennials don't want to be identified as such anymore.

Really, though, older millennials, you're either in or you're out; it's like when I took the quiz on Pottermore in 2011 and it told me I could choose Slytherin or Hufflepuff. You can't be a Slytherpuff. You have to be one or the other. You have to be Gen X, a millennial, or nothing at all.

More like this
11 Podcasts About The History Of Juneteenth
By Emma Carey
How To Take A .5 Selfie On An iPhone
By Emma Carey
YouTuber Runs Into Margaret Sanger’s Grandson While Filming
By Alexis Morillo
Why You're Seeing Green Bandanas At Abortion Rights Protests
By Lexi Inks
Get Even More From Bustle — Sign Up For The Newsletter