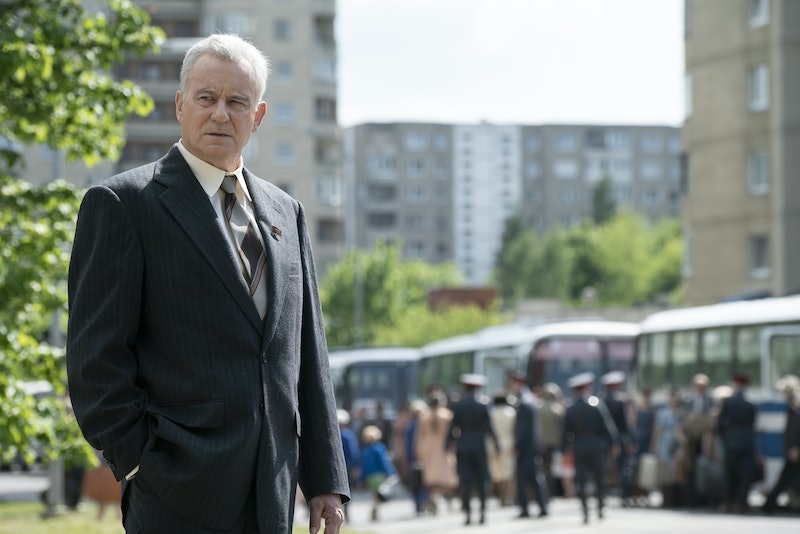 One of the biggest stars of HBO's Chernobyl, Stellan Skarsgård, didn't appear onscreen in the first episode of the five-part miniseries. But that doesn't make his character any less significant. Boris Shcherbina from Chernobyl was a real person and a leader in the Soviet Union. During the premiere episode, Shcherbina called up Valery Legasov to brusquely tell him he has been appointed by Soviet Union leader Mikhail Gorbachev to a committee to manage the accident at the Chernobyl nuclear power plant. Just like Jared Harris' Legasov is based on the real scientist involved in figuring out what caused the incident, Skarsgård's Shcherbina was the real political figure who oversaw the committee. But the Swedish actor said in an interview that he didn't do much of a history lesson when it came to portraying this real-life figure.

Shcherbina in Chernobyl claims he is the deputy chairman of the council of ministers and head of the bureau for fuel and energy in "1:23:45." And the preview for the upcoming weeks, like May 13's "Please Remain Calm," shows how he is part of the political machine that is denying the real human and environmental toll this nuclear leak causes.

In real life, The New York Times reported that Shcherbina was appointed as a deputy prime minister to prime minister Nikolai Tikhonov in 1984. He had previously been the Minister for Oil and Gas Construction and directed the Urengoy–Pomary–Uzhhorod (or Trans-Siberian) Pipeline project before this appointment.

As Ukrainian-American historian Serhii Plokhii outlined for the History Channel, Shcherbina was the chairman of the Gorbachev-ordered state commission on Chernobyl. Shcherbina had been on a business trip in Siberia when the nuclear accident occurred in the early morning of April 26, 1986. The Ukrainian statesperson arrived at the site of Chernobyl in Prypiat, Ukraine, 18 hours after the explosion. And while he took some convincing, Shcherbina finally ordered the evacuation of Prypiat due to the radioactive contamination. But this delay meants that the citizens were exposed to the radiation for 36 hours after the nuclear power plant's explosion.

In an interview with Collider, Skarsgård discussed his Chernobyl character's evolution from being part of the coverup to realizing this disaster has bigger repercussions that needed to be dealt with. "It's interesting to play a character who is representative of a faulty system, and has spent his life defending it, and then has to look back at his life and admit that he's been wrong. Finally, he comes to the conclusion that he has to stand up for something else," Skarsgård said.

However, Skarsgård noted that he didn't spend too much time researching the real Soviet Union political figure. "The real man is different from the man that I'm playing," the actor told Collider. "The real man is very hard to get any information about. I play the character of the script, and the script and the story need some things from this character, whether that was the way he was or wasn't. I don't even look like the original character, Boris Shcherbina."

That doesn't mean that Skarsgård's character is pure fiction though. Chernobyl creator Craig Mazin has been very open in interviews and on the Chernobyl podcast about how he tried to stay true to what occurred during the biggest nuclear accident in human history. But to tell the story, he did take some liberties, particularly with his lead characters. For instance, Emily Watson's character was not a real person. Still, Shcherbina was a real person who initially assisted in covering up this catastrophe and you can watch Mazin's interpretation of this one man's actions on Chernobyl.

More like this
Holly Willoughby & Phillip Schofield #Queuegate Drama, Explained
By Sophie McEvoy
Two UK Cities Are Now In The Running To Host Eurovision 2023
By Sam Ramsden and Rachel Mantock
Who’s The Richest 'Grey’s Anatomy' Star? See The Net Worth Of Each Cast Member
By Hugh McIntyre
'The White Lotus' Season 2 Trailer Teases Multiple Affairs & Another Dead Body
By Bustle Editors
Get Even More From Bustle — Sign Up For The Newsletter