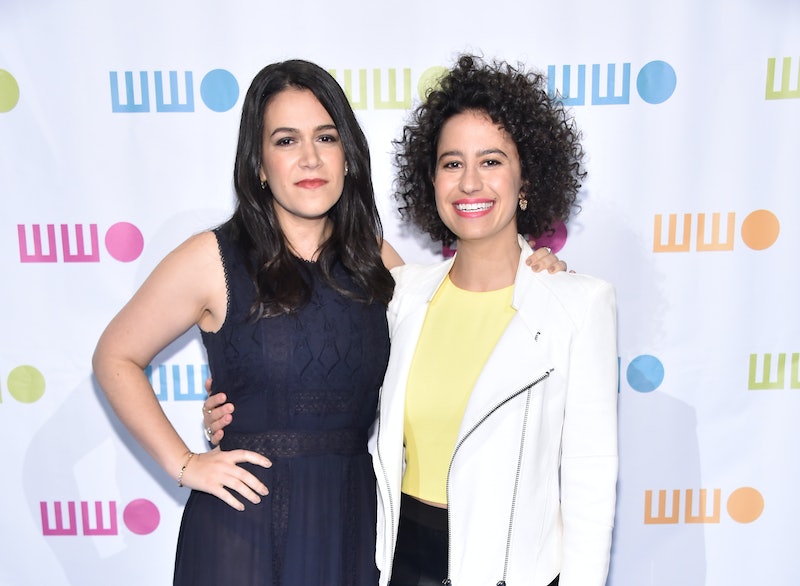 It's hard to imagine anyone would pass up the chance to hang out with Abbi and Ilana and get into wild, raunchy antics around New York City, but it turns out that not everyone was as instantly charmed by Broad City as the rest of us were. In her new book, Abbi Jacobson claimed that FX originally turned down Broad City for being "too girly" of a show, after she and Ilana Glazer developed a pilot for the network.

According to Vulture, Jacobson chronicled her and Glazer's struggle to turn their cult favorite web series into a full-blown sitcom in her new memoir, I Might Regret This. The pair — along with Amy Poehler, who had signed on as executive producer to help Broad City find a television network — originally sold the show to FX, and spent a year developing a pilot that would work with the network's comedic sensibilities. "After we got to a place we all felt good, it was handed up to the man in charge, the man we never met, the man at the top. He’d probably never heard of us, the show, or the year we’d been in development, and he wasn’t into it," Jacobson wrote.

She continued: "It was, as we were told, ‘too girly.’ So, they passed. We were devastated. This thing that was once so far-fetched has actually started to come to fruition, and then was abruptly taken away.”

The writer and actress went on to explain that the whole process actually disillusioned her with the television industry as a whole, and she found herself questioning whether developing Broad City into a TV show was even worth it in the long run.

"Call me crazy, or naive, but this seems counterintuitive, outdated, and like a complete waste of time," Jacobson wrote, via Vulture. "Do I sound annoyed or heated by this snub, over six years later? Maybe, but because I’ve been in the game a minute now and it keeps happening like that."

Luckily, FX passing on Broad City allowed the show to end up on Comedy Central, where the show in all of its "girly," absurd, and goofy feminist glory. "They got us completely," Jacobson wrote about the comedy network, where the show will wrap up its five-season run in early 2019. In fact, the team at Comedy Central was so supportive of Jacobson and Glazer's vision that they even persuaded the comediennes to use their real first names on the show, just like they did in their original webseries.

"I can’t remember why we changed them from our own when we originally sold the show, but I imagine it was to separate the characters from ourselves, to have a divide," Jacobson explained of the decision to name her character Carly in the original pilot. (Glazer's character was to be named Evelyn.) "We were in the office one day working on revisions, when one of the producers came in to tell us how strongly he felt we should use our real names, that so far, at least in the web series, using our real names was what made it feel so authentic. We agreed and changed them back."

Since premiering on Comedy Central in 2013, Broad City has become a pop culture phenomenon, thanks to its hysterically and brutally honest depiction of life as a twenty-something woman in New York City — and, more importantly, for the delightful and inspiring friendship between Abbi and Ilana. And with the fifth and final season officially underway, fans can only hope that Jacobson and Glazer's determination to stay true to their original vision will open the door for future shows to depict women in all of their wonderful, flawed, and exciting ways — without being dismissed as "too girly."

If that doesn't deserve a collective, "Yas, Queen," well, we can't think of what does.